The same methods used to drive us to war in Iraq are being used to drive a narrative that we should fear China. Join us in advocating for peace with China by taking action below.

Keep up to date with all of the latest on China

We need to counter the US's aggression towards China through love for humanity & dedication to mutual respect & world peace. 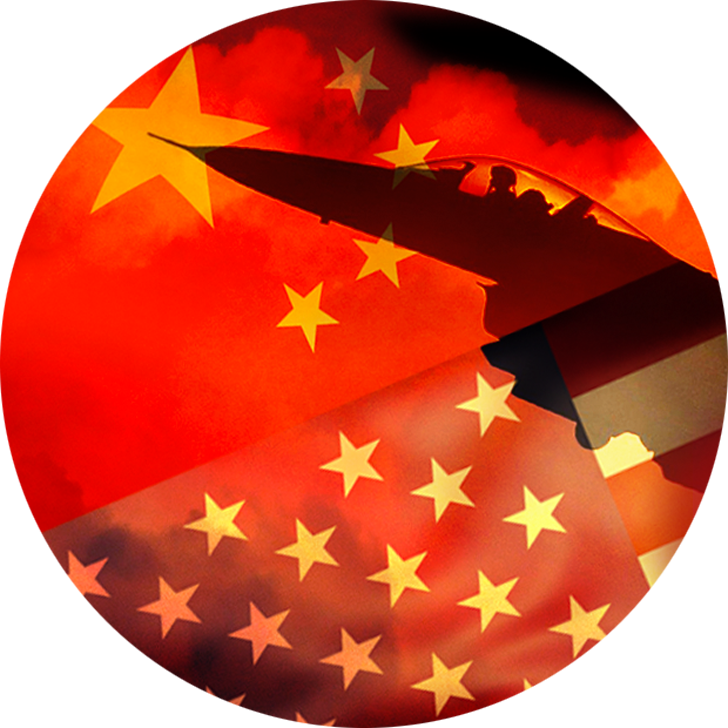 Tell Your Senators: Vote NO on Congress’s New Anti-China Bill!

Contact your senators now and demand they VOTE NO on the Strategic Competition Act, which would increase military funding to escalate U.S. aggression towards China. As part of the U.S. government’s bipartisan efforts to escalate aggression towards China, U.S. Senators Menendez and Risch have introduced an expansive new anti-China bill. On April 21, the bill passed the Senate Foreign Relations Committee by a 21-1 vote, and it will now go on to the Senate. Before it gets rushed through the legislative process with bipartisan support, let your senators know that military aggression and hostile competition are not the answer to the U.S.’s issues with China. Instead, cooperation with China on global crises is urgently needed for the survival of the planet and humanity. Use our tool below to email your senators. 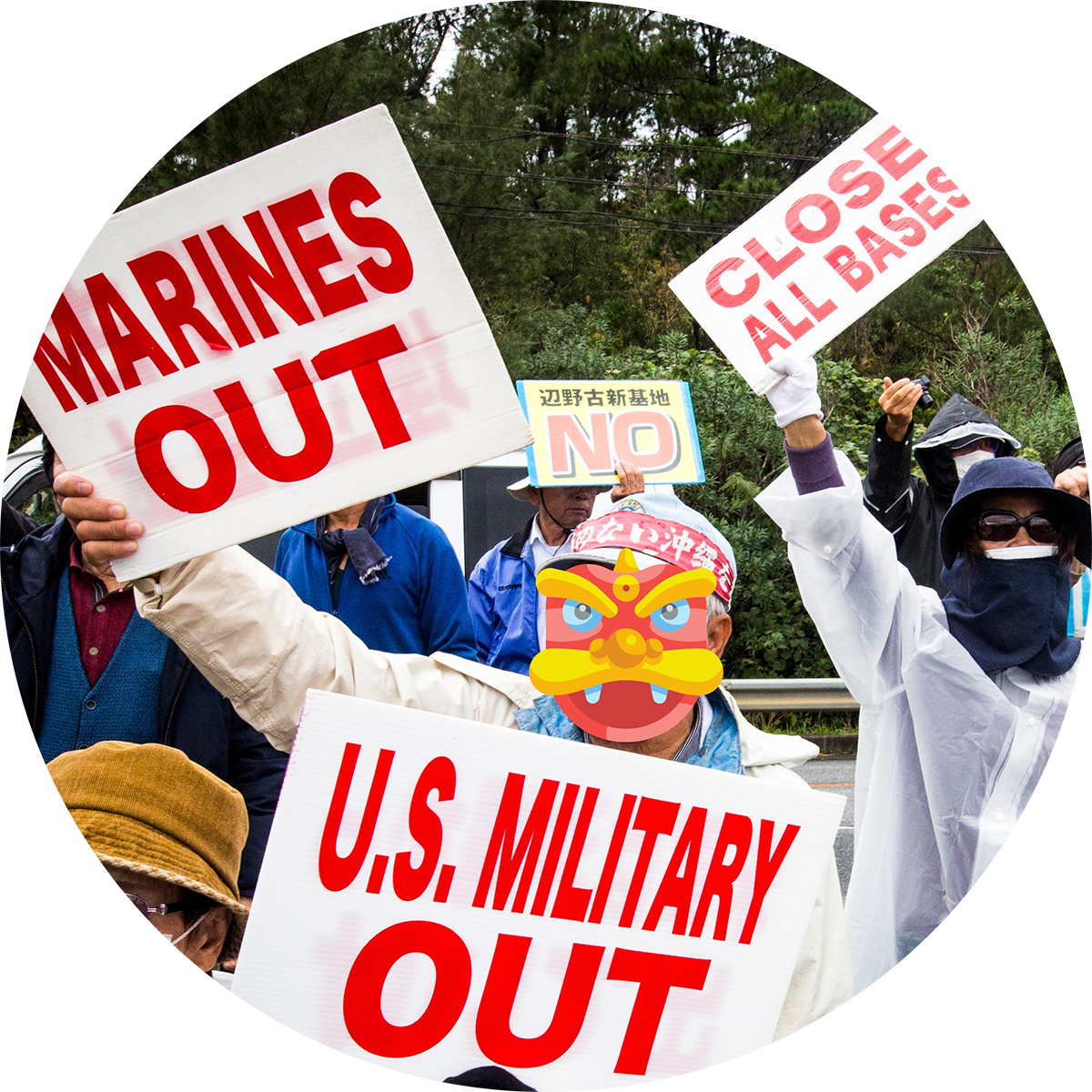 As it escalates military aggression against China, the U.S. is currently building a dangerous, environmentally destructive Marine base in Henoko, Okinawa against the will of the Indigenous Luchuan (Okinawan) people. This new base will damage the environment, violate human rights, oppress Indigenous Luchuans, and desecrate the dignity of war victims, whose remains are believed to reside in the soil being used by the U.S. to fill the ancient coral reef of Henoko. Send a letter to the Biden administration demanding an immediate end to the construction of a new U.S. military base in Henoko, Okinawa! 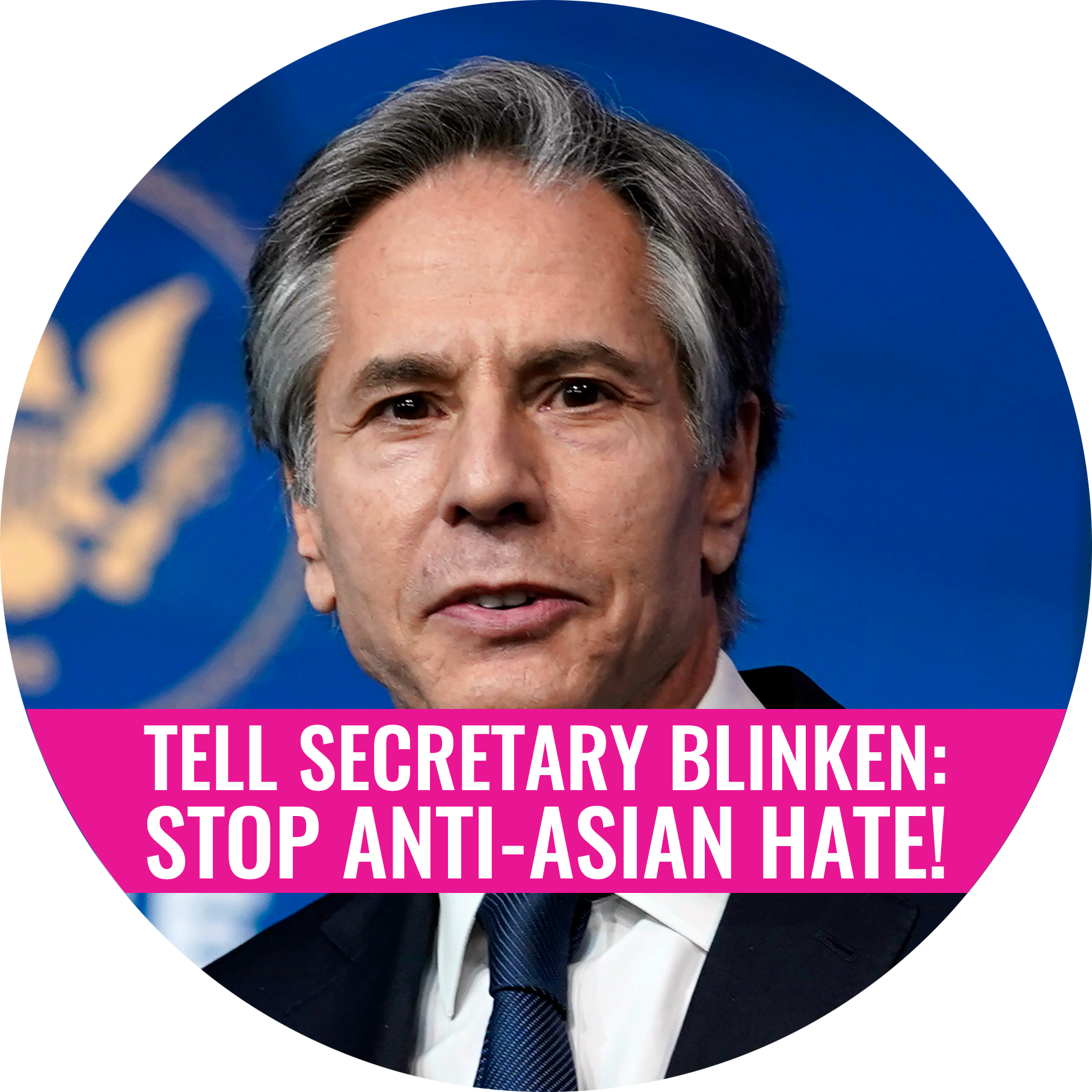 Tell Secretary Blinken to stop endangering Asians at home and abroad with his anti-China Cold War aggression #ChinaIsNotOurEnemy! Ramping up aggression towards China endangers lives and continues our grotesque levels of Pentagon spending while the needs of Americans remain unmet in the midst of an ongoing pandemic and recession. #StopAsianHate Sign CODEPINK’s petition: 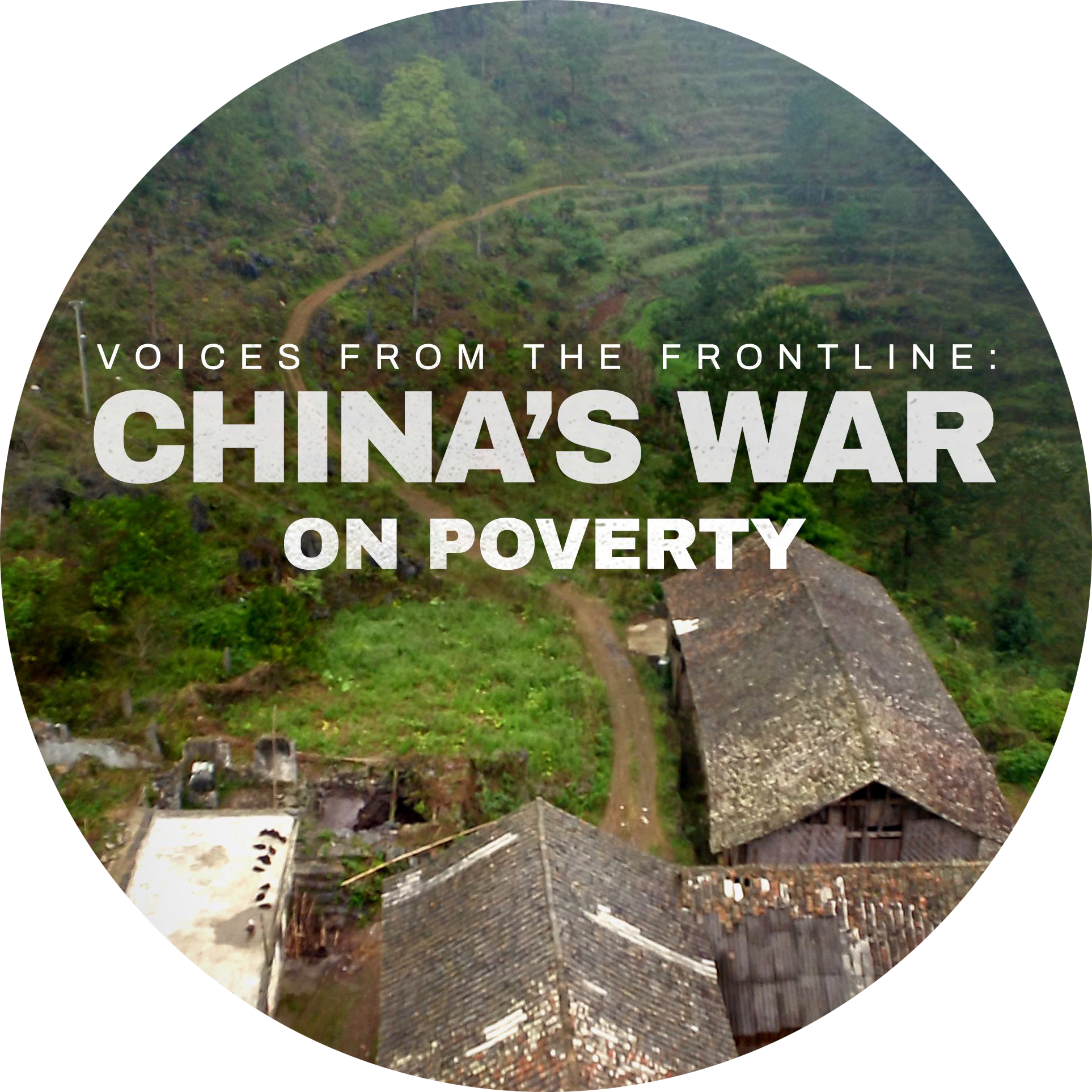 PBS has taken down "Voices from the Frontline: China’s War on Poverty", a documentary directed by directed by award-winning Peter Getzels and co-produced by PBS-SoCal with a foundation led by Robert Lawrence Kuhn. This documentary reveals how China took 100 million citizens out of poverty. PBS is impoverishing its viewers by censoring this documentary and contributing to anti-China rhetoric. Tell PBS to stop censoring their audience and release the film. 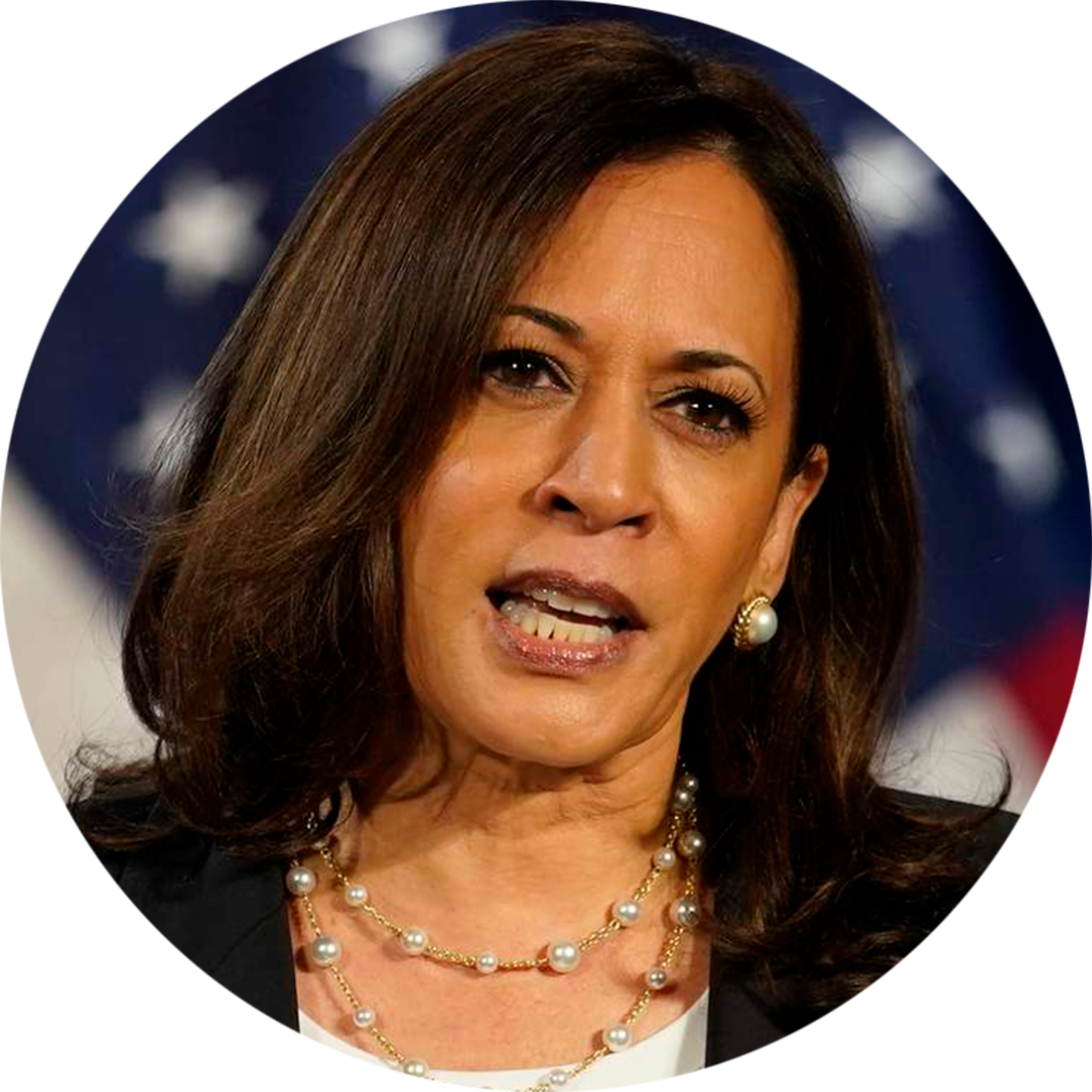 As we continue in dismantling the US White House led anti-China rhetoric, we are calling on Vice Presidential nominee, Kamala Harris, to help end the aggression towards China. Please add your name to this letter. We will be delivering it to Kamala after the election. 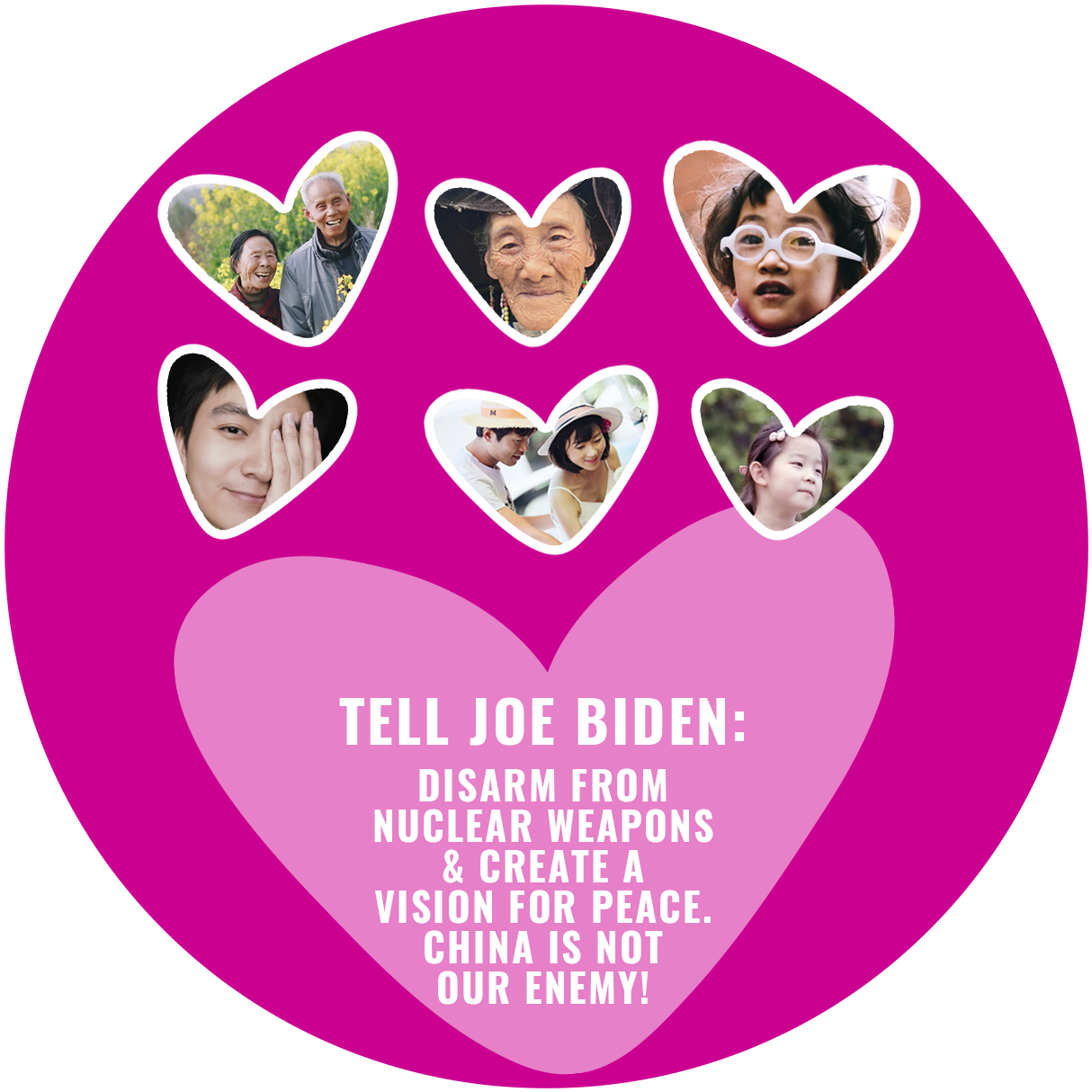 Let’s Pull Our Nation Away From the Brink of a Nuclear War!

Join us in spreading the word that China is not our enemy.  Instead of driving hatred with China we need to turn our energies into cultivating peace and cooperation so we can all work together to confront the problems arising from ongoing Climate catastrophes, global inequality and growing fascism — which is much more frightening than China will ever be. For safe measure, we need a “no first use” commitment from the U.S. Government, or they are the real enemy of the planet and all people on it.

Keep Anti-China rhetoric and military funding out of the EAGLE Act!

Keep Anti-China rhetoric and military funding out of the EAGLE Act!

Tell the Biden admin: No New U.S. Military Base in Henoko, Okinawa!

Tell the Biden admin: No New U.S. Military Base in Henoko, Okinawa!

Why Do We Need Peace with China?

Why Do We Need Peace with China?

May 14, 2021: China Is Not Our Enemy webinar: A Transnational Perspective from Dr. Zhun Xu

May 12, 2021: China Is Not Our Enemy webinar: Stopping Nuclear Escalation with Dan Hirsch

April 21, 2021: China Is Not Our Enemy: Inside China: A Conversation with Tings Chak & Marco Fernandes

February 2, 2021: China Is Not Our Enemy with Peter Getzels