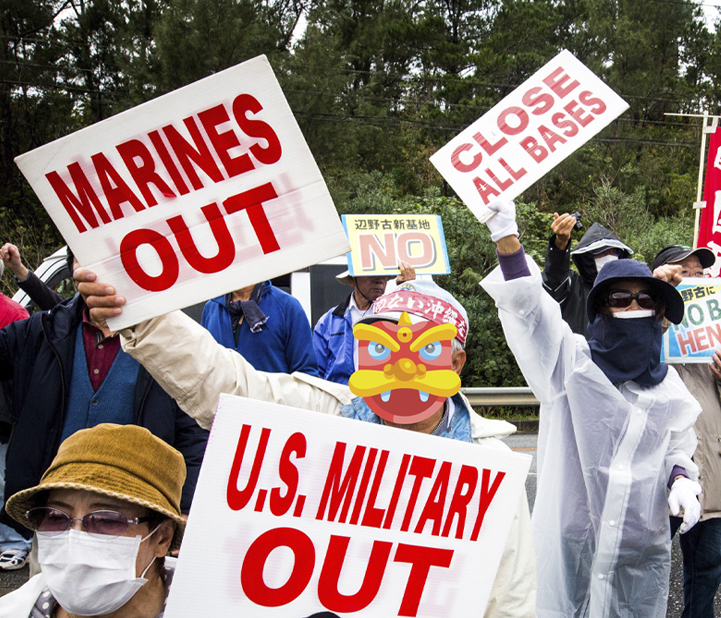 We condemn the escalating U.S. militarization of Guam and the wider Asia-Pacific region, which threatens people and planet. We object to any further militarization of the region and call upon U.S. government representatives to do the same. We join the Chamorro people, Guam’s native inhabitants to call on Congress to stop the Human Rights violations and the destruction of their ecosystems in preparation and provocation of the US war on China.

Inhabited for over 3,500 years by the Indigenous Chamorro people, Guam’s native inhabitants have suffered repeated harms since the United States took colonial control over the island in 1898. This treatment includes racist and discriminatory policies by U.S. naval authorities denying basic civil rights; disastrous health impacts from the storage and use of nuclear weapons, radioactive vessels, Superfund toxic waste sites, and hazardous chemical agents; and massive land seizures to make way for U.S. military bases and installations. The U.S. government continues to deny the Chamorro people their fundamental right to self-determination, contrary to its obligations under international law to hasten the decolonization of Guam.

Rather than address past harms, the United States continues to perpetrate new ones, including an extensive expansion of the U.S. military footprint in Guam. Despite widespread local opposition, and censure from the U.S. Environmental Protection Agency and several Senators over the financial cost and environmental impact of the expansion, the transfer of thousands of military personnel and associated workforce to the small island have proceeded. The military buildup has seen construction of live-fire training ranges and other installations over sites of great cultural and spiritual significance to Chamorros, including protected wildlife refuges and critical habitats for numerous endangered, endemic species.

A Live Fire Training Range Complex is now being built adjacent to one such site, home to 3,000-year-old villages, ancient cave art, and traditional medicine-gathering and fishing grounds, and in close proximity to the island’s primary source of drinking water. The military also aims to clear cut 1,000 acres of pristine limestone forest, home to the last seeding specimen of an Indigenous endangered tree species.

As the U.S. military continues to bulldoze burial grounds and cultural artifacts, with little concern for the well-being of the native inhabitants, it is all too evident that Chamorros are being sacrificed in the name of the broader U.S. geopolitical agenda.

America’s obsession with containing China is being used to justify ever-more militarization of the Asia-Pacific. Indeed, just recently the Biden administration requested nearly $900 million to build up missile defenses in Guam. Guam is not alone in being exploited for the country’s geopolitical gain; communities in the Commonwealth of the Northern Marianas Islands (CNMI), Hawai‘i, Okinawa, Korea, Japan, and Australia have also suffered from military colonization and ongoing expansion plans.

For those drinking contaminated water, exposed to cancerous radiation from Superfund sites, and witnessing the destruction of their cultural heritage and natural landscapes, U.S. military occupation itself is the threat – not a distant rising regional power. We therefore call on the U.S. Congress to stop escalating war mongering rhetoric regarding China and allocating billions to fund the endless war machine. Such actions detract from efforts to fight far bigger universal threats – like climate change, poverty, and pandemics. For all its talk, the United States will not solve climate change by continuing to pour money into the coffers of its military, the largest institutional contributor to global warming on the planet.

We call on Congress to investigate the allegations set forth in the joint allegation letter from three UN Special Rapporteurs regarding the impacts of increased U.S. military presence in Guam. In particular, the Special Rapporteurs accuse the United States of failing to protect the Chamorro people from the loss of their traditional lands, territories, and resources; serious adverse environmental impacts; the loss of cultural artifacts and human remains; as well as the denial of self-determination and the right to free prior and informed consent.