Tell President Biden: China Is Not Our Enemy! 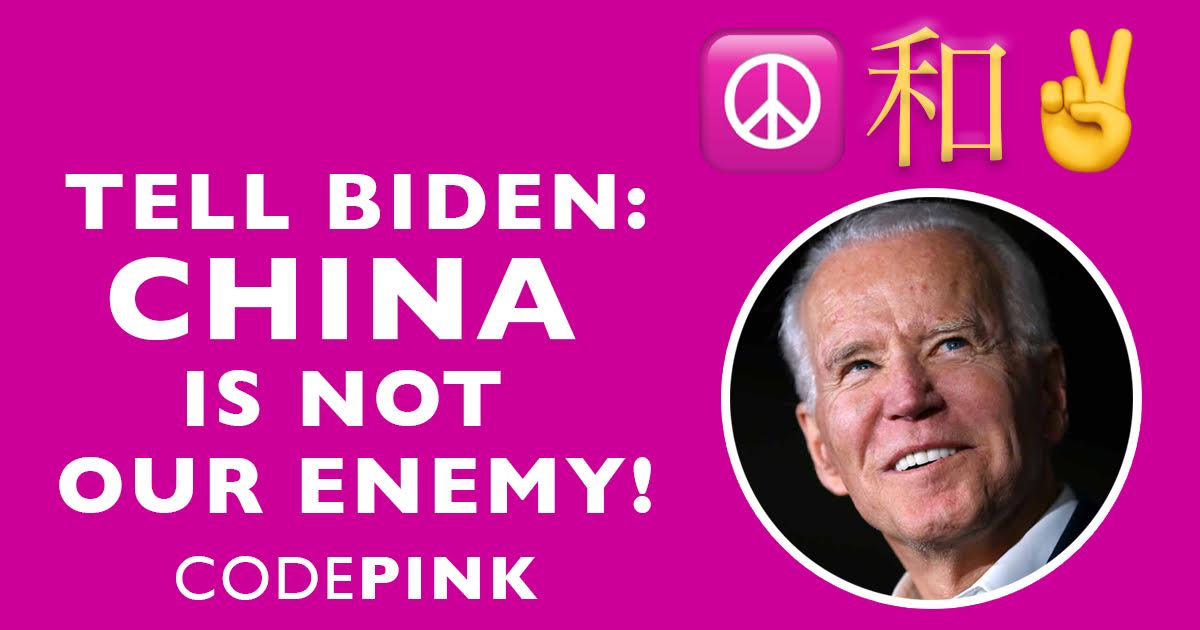 Join us in urging President Biden to abandon the adversarial position the US has adopted toward China since the second Obama administration, and to seek a more cooperative relationship with that country. Taking a "hard stance on China" will not get us to positive solutions. Instead, it will hinder both of our countries and the world. We are calling on President Biden to shift his stance on China and really "unify" us all.

Thank you to our committee team member, Stephen Roddy, for drafting this letter.

We offer our heartfelt congratulations on your victory in the 2020 election, and wish your new administration success in tackling the daunting problems facing our nation and world.  We write today to address one policy arena that may prove crucial to your ability to move both the US and the global community as a whole in a more positive direction: US-China relations. In the broadest sense, we urge you to abandon the adversarial position that the US has adopted toward China since the second Obama administration, and to seek a more cooperative relationship with that country. China is not our enemy.  In what follows, we will outline the reasons why we believe the post-2012 US strategy of containment at best—and active provocation at its worst—has needlessly aggravated an increasingly fraught global situation, and why Americans would benefit enormously from harmonious, sustained, and respectful dialogue and collaboration with China.

First, we would like to remind you that, while your predecessor contributed a great deal to the tensions that now exist between the two countries, and stirred up domestic anti-Chinese feelings to unprecedented heights, numerous studies have shown that Trump’s criticisms of post-2001 foreign wars were a significant factor in his 2016 victory over Hillary Clinton.  However credulous many of them may be, his 73-million-strong base continues to react favorably to Trump’s anti-war rhetoric, and many are passionately opposed to the diversion of treasure to any foreign military adventurism.  One sure way to prevent this disingenuous tactic from being wielded by a Trumpian successor in 2024 would be to ratchet down geopolitical tensions—all around the world, but especially in East Asia.  A new era US-China rapprochement, along the lines of Nixon’s policy of détente in the wake of the Vietnam War, could achieve both domestic and international goals, and cement a Biden legacy of repairing the fraying social fabric at home that we so desperately need.  As you have eloquently stated, it is time to stop dividing Americans along racial, geographic, or political lines.  The dangerously bellicose rhetoric and actions that have characterized our recent China policy have only worsened national unity at home. It is high time to calm the waters, both in the South China Sea and, figuratively, here at home, too.

Hostility toward China has backfired on the US in the past, and most assuredly will once again. It could be argued that both the Korean and the Vietnam Wars were born out of a hysterical fear of post-1949 China that, in retrospect, was neither warranted nor ultimately productive.  Our current episode of fear-mongering about a much-hyped Chinese “menace” echoes 1950s McCarthyism, and is, if anything, even less rooted in a realistic or sober assessment of China’s intentions or actions on the world stage.  Instead of saber-rattling, your administration would do well to revive the mutually beneficial economic ties that faltered under Trump’s erratic trade policies, and judiciously revise them where needed.  Why should we view China’s rise to economic parity with the US as a threat? China’s prosperity has already benefited much of the world economy, including our own.  Attempts to thwart the inevitable will only result in more self-inflicted wounds.

Anti-China policies hurt Chinese-Americans and other Asian-Americans. Aside from the pragmatic benefits of cooperation with China, there is a moral imperative to end the demonization of China. Under Trump, Chinese-American and other Asian-American citizens have endured racism and xenophobia of a virulence not seen in generations.  The Chinese-Exclusion Acts of 1870-1940 may have been more blatantly discriminatory, but the current style of Yellow Peril-style rhetoric, and the harassment of Chinese visiting academics and others, have descended into depths never before plumbed.  Casting students as agents of Chinese espionage, vilifying entrepreneurs for taking jobs from “real” Americans...where will it end? Surely, reuniting the American people behind a program of economic revitalization does not require such histrionics. To the contrary, your Administration should be urging Americans to learn from the many examples of how China has rebuilt its society and economy so effectively in the past 40 years, and how it is recovering from the coronavirus..

Cultural, political, and social engagement with China will dispel ignorance and foster greater trust. There is a deep and enormous reservoir of goodwill toward the US among broad swathes of the Chinese population, based on a long and fruitful history of interaction dating back to the Boxer Indemnity Scholarships set up in 1909 and continuing through generations of Chinese who have studied in the US. This includes the current leadership (Xi Jinping himself spent time in his 20s in Iowa, where his host family remembers him fondly), as well as many average Chinese.  Building upon this foundation of people-to-people ties to restore amity between our nations will do much to dispel the clouds of mistrust that have developed in recent years. Both the US and China have much to offer each other and the world, in terms of fighting communicable diseases, creating new educational opportunities for youth, alleviating poverty around the world, and many other significant tasks.

The global environmental crisis should be paramount in our relations with China as with the rest of the world. Military rivalry between our two nations, let alone confrontation, are distractions that we can no longer afford.  To even attempt to meet the target of 45% CO2 reductions by 2030 set by the Intergovernmental Panel on Climate Change, we must work closely with the entire world, and most of all with China. Our common human destiny and our survival as a species hinges to a great extent on the success of the US and China in surmounting the enormous challenge of transitioning to a carbon-neutral economy and world in the coming decades.

President Biden, we ask that you steer the ship of state away from confrontation and toward peace and friendship with China. This is the only sane choice in our present circumstances. We are not asking you to ignore areas that are concerning to many Americans, including the issues of human rights, environmental protections, human or animal trafficking, and so forth. But these points of divergence should not be allowed to derail the overriding aims of our two nations: to ensure a more humane and liveable world for current and future generations.  We must remember that the first casualty of war is always human rights. We have much work to do, and we must do so with mutual respect and tolerance for our differences. Complementarity and cooperation, not conflict, are the keys to our future survival.