Tell PBS to Meet with CODEPINK & Stop Censoring the Truth About China! 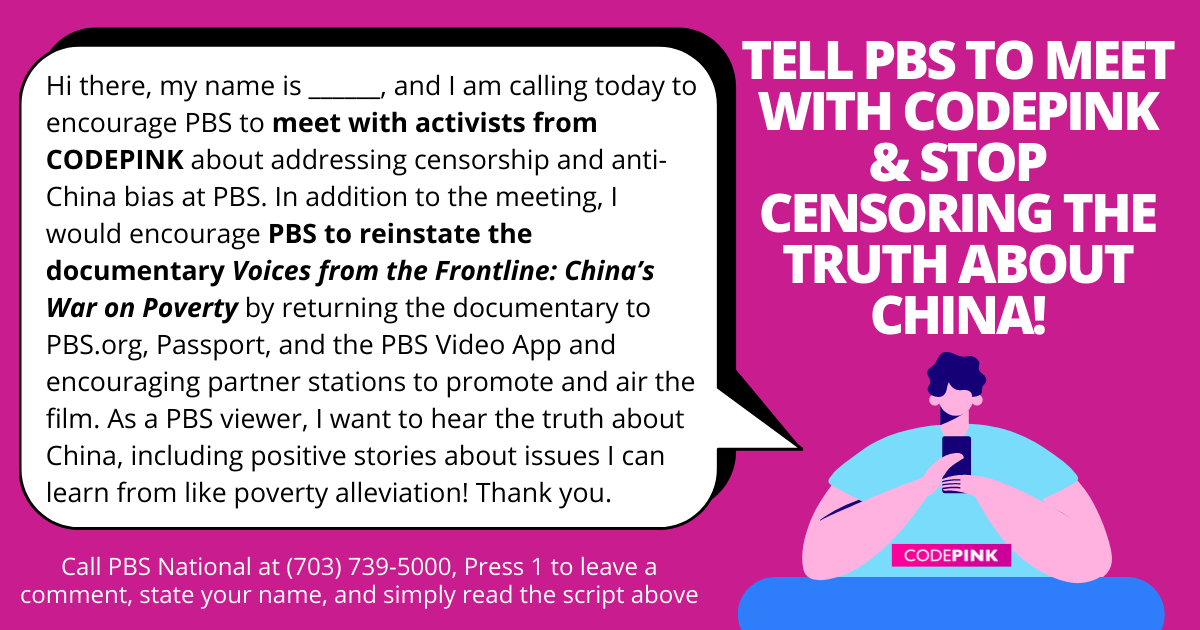 Given the lack of accountability and unwarranted police response from PBS when we delivered signatures to their offices, we are calling on members of the public to demand that PBS meet with CODEPINK to address their anti-China bias and censorship of Voices from the Frontlines: China’s War on Poverty. See our letter to PBS asking them to reinstate the film here. #PBSTelltheTruth! #ChinaIsNotOurEnemy!

Call PBS National: Fill out the form below to automatically receive a call connecting you to PBS!

Hi there, my name is ______, and I am calling today to encourage PBS to meet with activists from CODEPINK about addressing censorship and anti-China bias at PBS. In addition to the meeting, I would encourage PBS to reinstate the documentary Voices from the Frontline: China’s War on Poverty by returning the documentary to PBS.org, Passport, and the PBS Video App and encouraging partner stations to promote and air the film. As a PBS viewer, I want to hear the truth about China, including positive stories about issues I can learn from like poverty alleviation! Thank you.

🗣 PBS @PBS @PBSPubEd & @Ricsand, it is unacceptable that you called the police on @codepink activists urging you to stop censoring the truth about China’s war on poverty! We are asking you to meet with CODEPINK @chinanotenemy to discuss these concerns about this bias! #PBSTelltheTruth

As a PBS viewer & taxpayer, I’m asking for @PBS @PBSPubEd & @Ricsand to stop censoring the truth about China’s war on poverty! Reinstate the film Voices from the Frontline: China’s War on Poverty on all PBS Streaming services & encourage local stations to air the documentary! ☮️