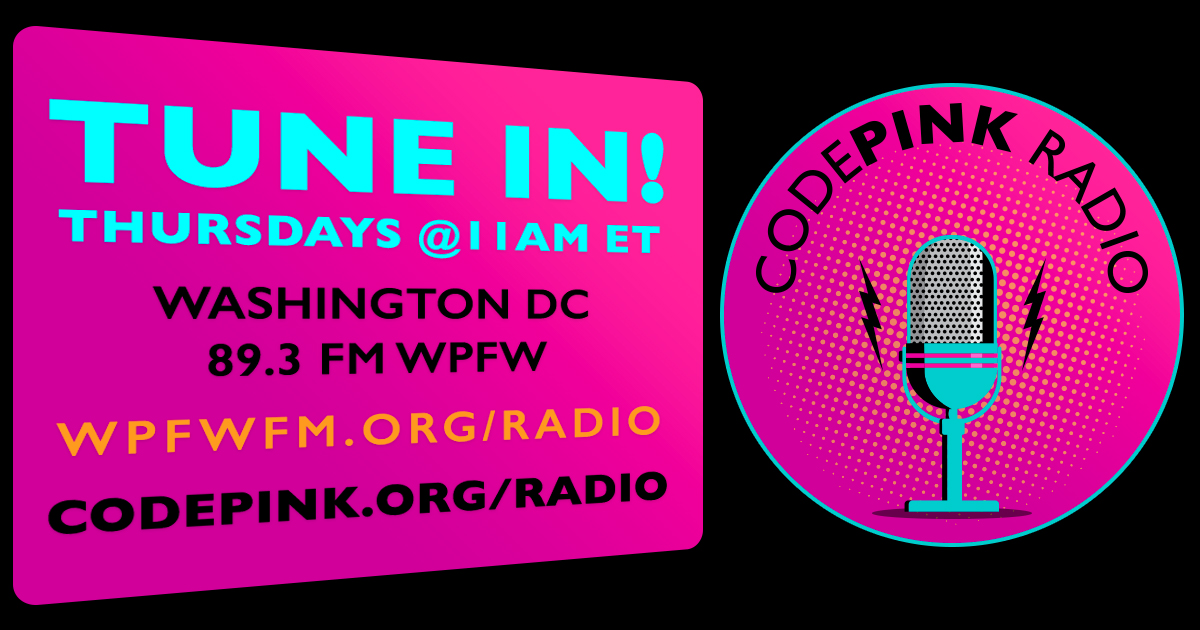 CODEPINK Radio is available on iTunes and Spotify

April 2, 2020 - Teri Mattson and Paki Wieland are joined by Lindsay Koshgarian, Helena Cobban, and Leonardo Flores. Lindsay is with the National Priorities Project and discusses how the Unite States was severely unprepared to deal with the pandemic due to lack of funding while over-funding the military. Helena from Just World Educational brings to light the current situation in Syria and the importance of language when speaking on their government. Finally, CODEPINK's own Leonardo speaks on Venezuela and #WagtheDog. Listen Here!

March 26, 2020 - Jodie Evans is this week's host! She is the co-founder of CODEPINK and called in from her home in Venice joined by Ariel Gold and Kenneth Bailey. Jodie discusses how we can cultivate local peace economies in the time of the coronavirus. Ariel reports on the situations in the Middle East with the pandemic and what actions you can take with CODEPINK to demand peace and justice. Kenneth Bailey from Design Studio for Social Innovation shares how they are creating local peace economies within their areas. Listen Here!

March 19, 2020 - Teri Mattson and Paki Wieland have special guests, Medea Benjamin, co-founder of CODEPINK and Hassan Ell-Tayyab, a member of the Defense Committee of National Legislation. Medea recounts the beginning of the Iraq War and how it sparked the movement which created CODEPINK. Hassan speaks about the war in Yemen and how the United States is the one that sells weapons to Saudi Arabia. Both guests address the gross mishandling of the pandemic that the United States has been doing both locally and internationally. Listen Here!

March 12, 2020 - Teri Mattson and Paki Wieland speak with Mark Weisbrot, Carlos Ron, and Ann Wright. Mark Weisbrot speaks on the effects of sanctions on Venezuela from death to financial insecurity of the entire country as collective punishment. Carlos Ron is the Venezuelan Vice Minister of Foreign Affairs to elaborate on how sanctions, while not recognized as traditional warfare, accomplish the same violence. Ann Wright discusses how sanctions were imposed on Gaza when we were the ones to make the first acts of war against them. Listen Here!

March 5, 2020 - Teri Mattson and Paki Wieland are joined with immigration attorneys, Jesse Franzblau of the National Immigration Rights Center and Gabby Rosazza of the US Labor Education in the Americas Project. The four reflect on the results from Super Tuesday and how that will affect the migrant situation at the U.S./Mexico Border. Listen Here!

February 27, 2020 - Ayanni Godbold, Teri Mattson, and Paki Wieland are joined by Azadeh Shahshahani and Joslyn Erica. Shahshahani discusses the humiliation and discrimination Iranian students are experiencing when trying and failing to return to the United States to pursue their higher education. Erica discusses recent actions in support of Julian Assange. Listen Here!

February 20, 2020 - Ariel Gold and Teri Mattson are joined by Anne Wright and Medea Benjamin. It's a full Pink house! Anne Wright discusses the recent Afghanistan elections as well as possible peace plans with the United States. Medea Benjamin discusses the travel opportunities with CODEPINK to delegations in Latin America and Iran. Listen Here!

February 13, 2020 - Teri Mattson and Paki Wieland speak with Christine Ahn, Gail Walker, and Leila Zand about the difference between "hot war" and "war by other means," primarily sanctions. While the presence of militant violence is absent, violence and death remains when resources are kept from citizens and families are kept apart. Listen Here!

February 6, 2020 - Teri Mattson, Paki Wieland, and CODEPINK DC intern, Ayanni, are joined by economist and columnist, Mark Weisbrot of CEPR to discuss the problems and barriers that places the United States as one of the countries with very low turn out rates. Teri also lists travel opportunities to Latin America with CODEPINK for the upcoming 2020 year. Listen Here!

January 30, 2020 - Ariel Gold and Teri Mattson are joined by Zahra Ali on this week's show. Recap of actions this past week including Swarm the Senate and the action outside the Brazilian Embassy. Zahra Ali is the author of Women and Gender in Iraq and is on CODEPINK Radio to discuss the protests in Iraq that demand U.S. troops out of the country. Listen Here!

January 23, 2020 - Ariel Gold and Paki Wieland are joined by Zillah Wesley and Janelle Bruce of the Poor People's Campaign DC to discuss the history, accomplishments and goals of the organization. They discuss the power of uniting across all people and communities against capitalism whereas segregation weakens the movement. Final reminder to come out Saturday, Jan 25 for International Day of Action for Peace With Iran. Listen Here!

January 16, 2020 - Join CODEPINK's Enas al Saffadi and Ariel Gold for updates on the Middle East. The United States assassinated Iranian war leader and now it is up to citizens across the globe to stand up for peace. Learn about International Day of Action on the 25th of January 2020. In other news, the ICC reports that Israel is guilt of war crimes against Palestine. What will this lead to? Listen Here!

January 9, 2020 - Join Paki Wieland as she interviews Teri Wattson for her report back from Venezuela. 45 orders the assassination of Iranian military leader, Qasem Soleimani. How are we to move forward to ensure peace and avoid war? Listen Here!

January 2, 2020 - Happy New Year! Join Paki Wieland with guests: Medea Benjamin, Helen Schietinger, and Maha Hillal. Paki and guests touch upon several topics such as the underbelly of Cuba, Guantanamo Bay, and the actions here in the United States commemorating the 18th anniversary of its opening as an illegal detention center. Listen Here!

December 19, 2019 - Join Jodie Evans, CODEPINK co-founder and national co-director for a discussion of activism around the world. Her first guest, Vijay Prashad is an expert in Indian politics and discusses recent developments there. After the break, Jodie is joined by Leonardo Flores, a writer and organizer with CODEPINK's Latin America campaign. They talk about social movements south of the border, from Chile to Venezuela, and how they connect to what is going on around the world. Listen Here!

December 12, 2019 - This week, join CODEPINK's national co-director and co-founder, Medea Benjamin, as she interviews two experts on two different Southwest Asian nations. In the first half of the hour, she chats with Matthew Hoh, senior fellow for the Center for International Policy, about the forever war in Afghanistan. After that, she discusses ongoing efforts by the peacemaking community to end the brutal war in Yemen. Her guest for the second half of the hour is Hassan el-Tayyib, Legislative Representative on Middle East Policy for the Friends' Committee on National Legislation. Listen Here!

October 31, 2019 - CODEPINK's Paki Wieland hosts and talks with CODEPINK's Ariel Gold about her recent trip to Iran life for Iranians under U.S. sanctions with Jamal Abdi, National Iranian American Council. Next we discuss the outcome of the Kings Bay Plowshares 7 Trial with Sam Husseini, Institute for Policy Accuracy.

October 17, 2019 - CODEPINK's Ariel Gold discusses Jewish activism from the US-Mexico border to Palestine. Guest speakers Carolyn Karcher, editor of the book Reclaiming Judaism from Zionism and Abby Stein of Never Again Actions to Stop ICE. They discuss how blatantly Israel tries to blind the realities of what is truly happening in Palestine. Listen Here!

October 3, 2019 - Hosted by CODEPINK co-founder, Medea Benjamin. This week's episode will be about the anniversary of Khashoggi murder and CODEPINK's Saudi boycott campaign with Ariel Gold. Listen Here!

September 19, 2019 - CODEPINK's Paki Wieland will be discussing the situation in Kashmir with Pakistani Feminist & anti-war activist, Sameena Nazir, looking at both the roots of the current uprising and possible solutions to the situation. Pakistan's Prime Minister, Imran Khan, recently visited with President Trump. The purpose of this visit and the United States follow-up will be topics of discussion. Listen Here!

September 12, 2019- Hosted by CODEPINK's Paki Wieland, guest speakers include the anti-nuke nuns Ardeth Platte and Carol Gilbert, and our two DC Interns Clara Trippe and Raegan Davis are our guests. We will look at past activities upon which we, in the present, are continuing to work for a just, nuclear weapon free world. These intergenerational CODEPINK identified women will share their visions and aspirations. Listen Here!

August 22, 2019 - CODEPINK Co-Founder Jodie Evans discusses the history of the organization along with the cultivation of a Local Peace Economy. Jodie gives us a fresh insight on peace-building by taking small, local steps, and eventually divest from the destructive war economy. Our second guest for the show is CODEPINK's Nancy Mancias, who discusses our Divest From War Machine campaign.Listen Here!

August 15, 2019 - This CODEPINK radio show will be hosted by Rose Asaf, NYC Coordinator. Rose discusses the rising tensions between India and Pakistan and the movement for independence by the Kashmiri people. Listen Here!

August 1, 2019 - CODEPINK co-founder Medea Benjamin and CODEPINK national co-director Ariel Gold kick off our first show by breaking down the dismal attention given to foreign policy in the recent Democratic Presidential debates. They also talk about inspiring examples of grassroots movements from around the world that are working to bring peace to their communities. Listen Here!