CODEPINK condemns the coup in Bolivia 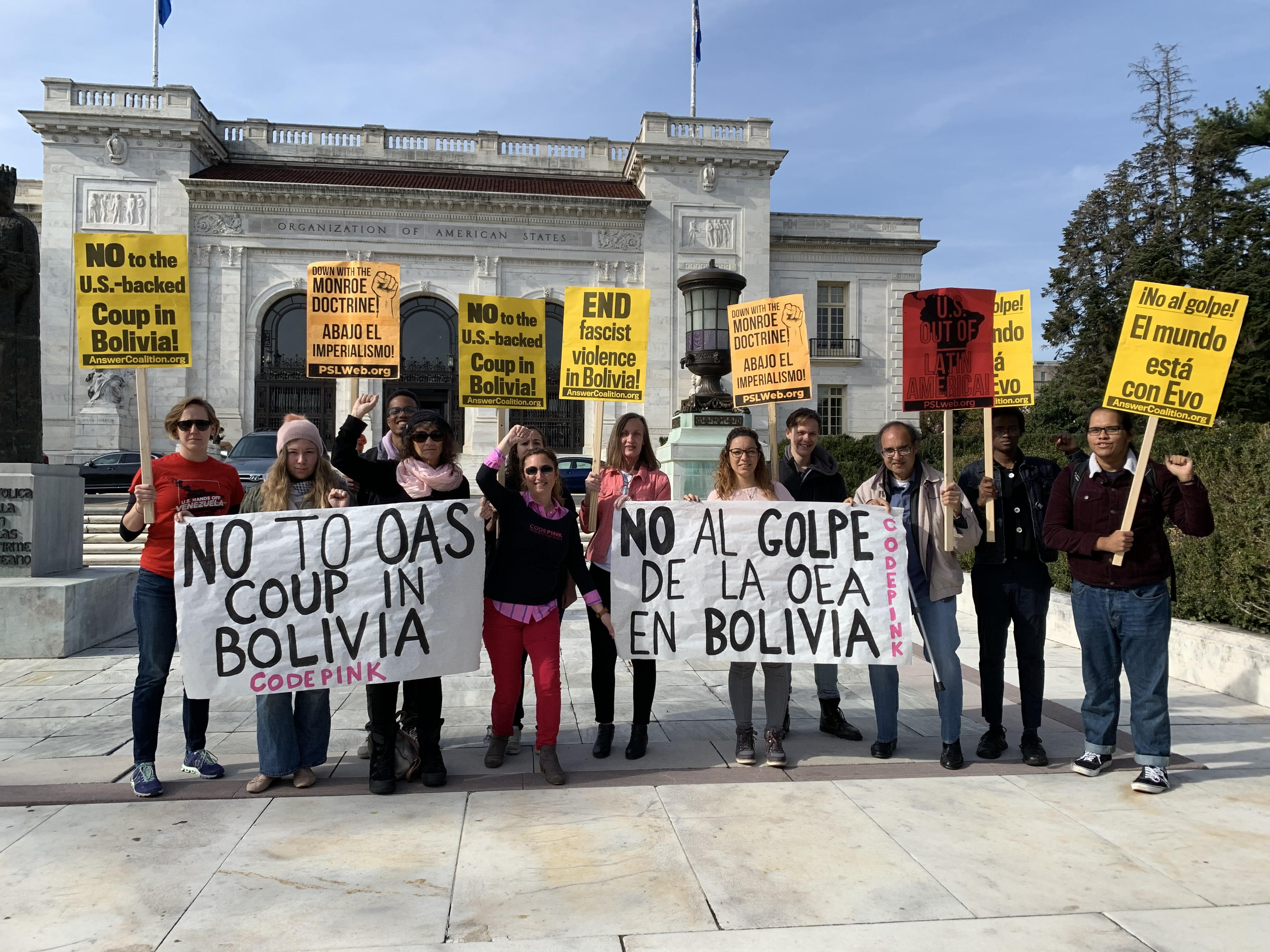 November 10, 2019 — CODEPINK denounces the coup d’état in Bolivia that resulted in the resignation under duress of President Evo Morales. Bolivia has been rocked by violence over the past three weeks, as opposition protests raged under the pretext of alleged election irregularities, but which in hindsight look like a planned overthrow of the Bolivian government. Early on Sunday, November 10, President Morales offered to replace the members of the electoral body and hold new elections in an effort to stem the violence and ensure peace in the country. This gesture was immediately rebuffed by opposition leaders, who are clearly more interested in imposing a government of their own rather than respecting the will of Bolivian voters.

Throughout the weekend, protestors burned houses of government ministers and elected officials. Victor Borda, the president of Bolivia’s lower house of parliament, resigned after his brother was taken hostage. Rather than stop the opposition violence, Bolivian police mutinied and the head of the armed forces suggested that President Morales resign. The threats and lack of security have led to the resignations of several members of President Morales’ MAS party, including his cabinet and the president and vice president of the senate. As a result of these resignations, opposition Senator Jeanine Añez will assume the presidency on an interim basis.

The Organization of American States bears direct responsibility for helping to foment this coup. On October 21, the day after the presidential election, the OAS issued a statement criticizing the process, even though final results had yet to come in. The OAS statement was thoroughly debunked by the Center for Economic and Policy Research, which later presented a statistical analysis of the results showing that the electoral results were well within the range of probability given all the information that had been released to date. After being invited by President Morales to conduct an audit, the OAS issued a preliminary audit that claims to have found electoral irregularities. In response, President Morales called for new election - a call that the opposition dismissed. It should be noted that the full report was to be delivered on November 12; the preliminary report was released during an extremely tense time in Bolivia, one day after President Morales denounced that a coup was taking place.

The role of the United States also cannot be ignored. The State Department has been actively opposing Evo Morales since 2001, when it sought to weaken his political base. This was five years before he was elected president. Since that time, the United States has funded President Morales’ political adversaries, including civic groups in eastern Bolivia that attempted a coup in 2008. According to the International Federation for Human Rights, the opposition in eastern Bolivia “promoted separatism and ethnically and socially based hatred [in 2008] through the Civic Committees (Comités Civicos), in particular the Pro-Santa Cruz Civic Committee.” The current president of the Pro-Santa Cruz Civic Committee is Luis Camacho, the leading coup figure.

As events continue to unfold in Bolivia, CODEPINK will be watching closely and we urge other organizations to do the same. The violence in Bolivia has a clear racial element to it, as the right-wing opposition is determined to push back the gains made by the country’s indigenous majority. There have already been shocking attacks against indigenous leaders, including against the mayor of Vinto, who was dragged out of her office, beaten up, had her hair cut off, was drenched with red paint and was then marched down the street by protestors who burned down the mayor’s office. The opposition also entered and trashed President Morales’ home, burned down the houses of several cabinet ministers and took family members of elected officials hostage.

As of the drafting of this statement, the status of President Morales remains unknown. According to several sources, including the President himself, there is a warrant out for his arrest. CODEPINK joins the international community in demanding that the health, safety and rights of Evo Morales be guaranteed.

We call on the United Nations to denounce this military coup. U.S. elected officials should not only denounce the coup, but also call for a congressional investigation to find out the extent to which the U.S. government was involved. 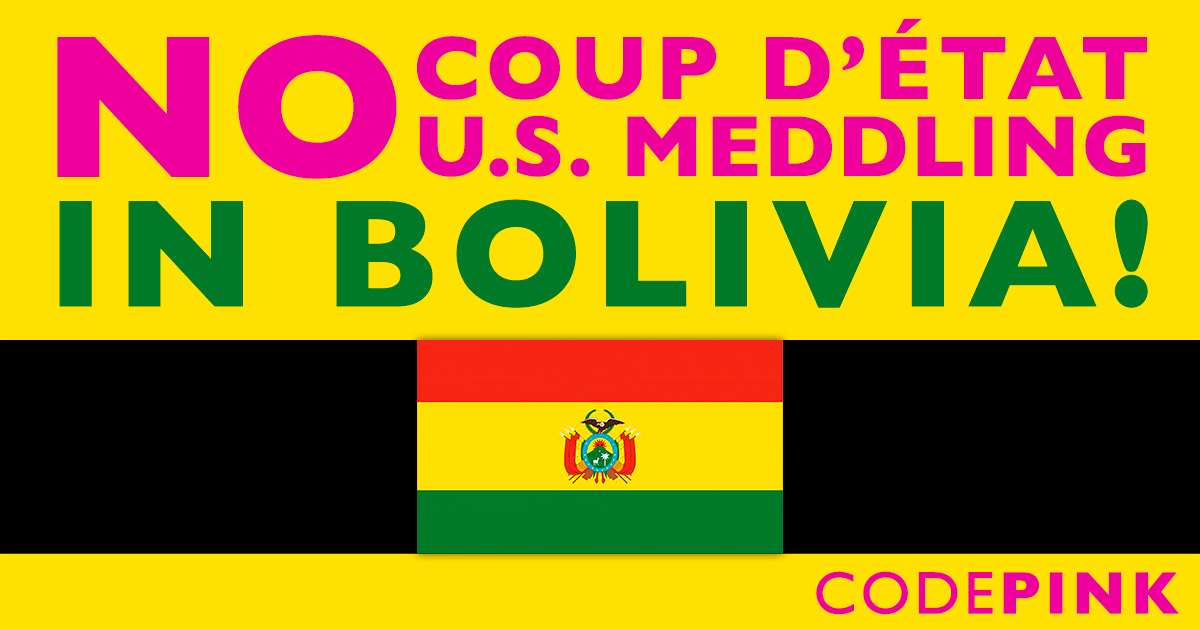 CODEPINK Applauds the Removal of $1 Billion...