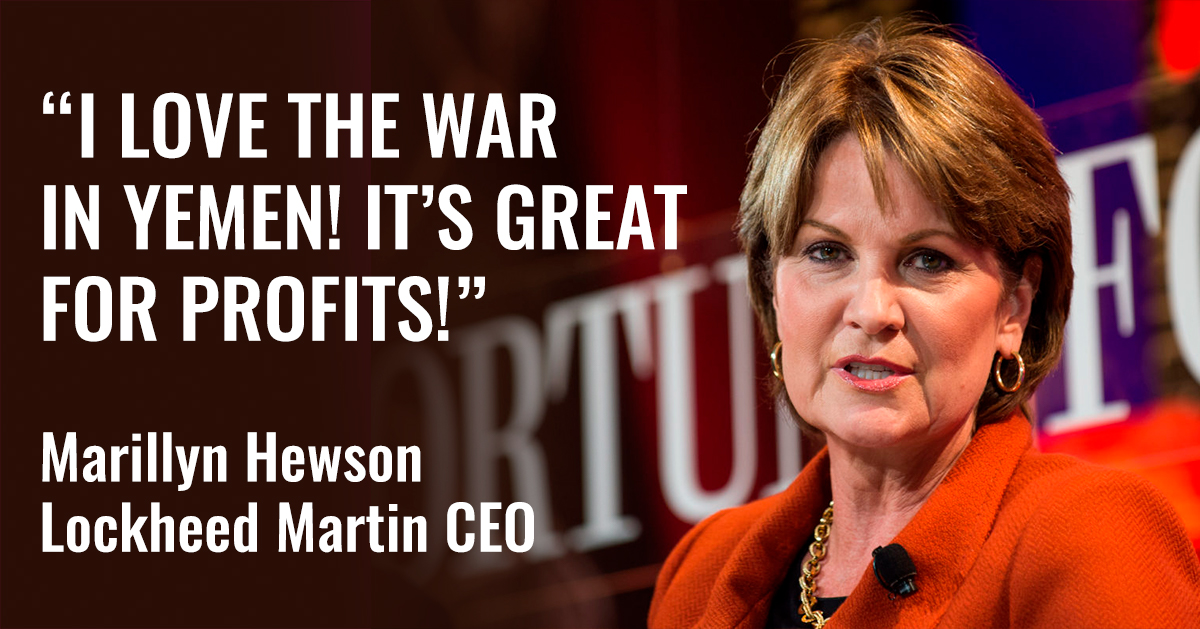 Disclaimer: Following press release is a spoof. The letter below it was not written by Marillyn Hewson, but by CODEPINK. It was written in accordance with what we imagine Marillyn Hewson's opinions to be regarding the war in Yemen. We hope you enjoy the humor.

Marillyn Hewson, the CEO of Lockheed Martin, has sent out a mass email toady attacking the peace organization CODEPINK and asking U.S. citizens not to let Congress curtail weapons sales to Saudi Arabia by voting for new legislation introduced today that would do that. In her email, sent to over 200,000 people, she calls CODEPINK “bad for business” and openly criticizes H. Con. Res. 138, the War Powers Resolution to End US Military Involvement in Yemen.

In her email, Hewson takes pride in the the billions of dollars in weapons sales that Lockheed Martin makes from sales of weapons to the Saudi Arabia for use in their war on Yemen. The U.S.-supported Saudi-led war on Yemen has created the greatest humanitarian crisis on earth.

“Marillyn Hewson puts profits before people” says CODEPINKer Brienne Kordis. “In her email she has the gall to say Congress should not support the Ro Khanna-Adams-Smith bill because it would reduce the billions she makes annually off of the war in Yemen. All Hewson cares about is being in the black, but to anyone with a heart, her billion dollar bottom line is red with blood.” A Lockheed Martin bomb was directly linked to the massacre that killed 44 Yemeni children on a school bus.

The War Powers Resolution, introduced on Wednesday, September 26th by House Representative Ro Khanna (CA-17), Adam Smith (WA-09), and Mark Pocan (WI-02), would end US complicity in war crimes being waged against Yemen by invoking the War Powers Act, which says that Congressional authorization is required for the U.S. To go to war. The U.S. involvement in Yemen was never authorized by Congress, and is therefore unconstitutional.

The text of Hewson’s letter is below.

Subject: CODEPINK is bad for business

Keeping our homeland (and my home) secure.