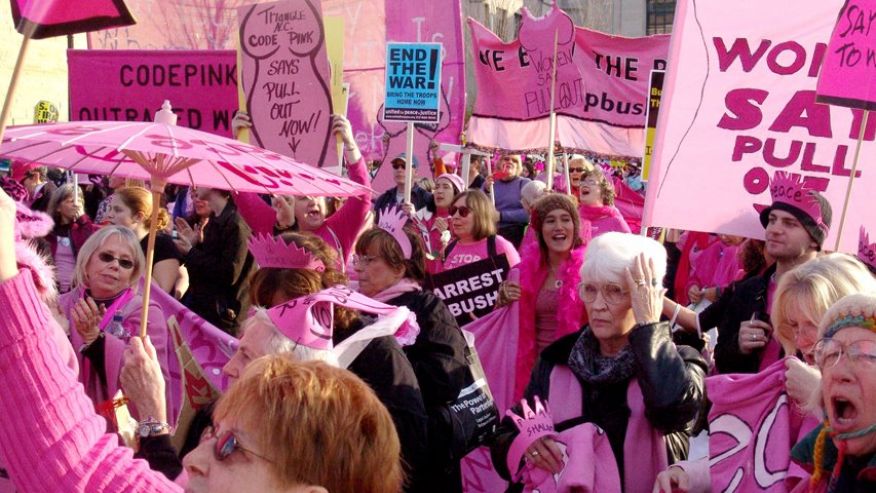 It’s great to be with you again, to speak to members of a group founded by a woman. When Maggie Kuhn was forced into retirement at age 65, she started Consultation of Older and Younger Adults for Social Change, which later got nicknamed, then officially named, the Gray Panthers. There is no age limit to political and social engagement, nor to our creativity and passion for justice!

I am going to start with breaking news from CODEPINK co-founder Jodie Evans: “CNN just referenced CODEPINK as the most effective group at disrupting and opposing political agendas … in the U.S.”

Well, thank you, CNN! Over the past 13 and ½ years, since CODEPINK’s beginnings, conceived by a small group of women meeting at the Bioneers conference, gestated during the winter 2003 lead-up to the Iraq War with a daily vigil during at the White House fence, and birthed by the courageous actions of many women all over the country, CODEPINK has become the most well-known and media-savvy peace group.

We have permanently changed how political protest, throughout the U.S., and extending to Japan and Germany, looks, sounds and feels.

For peace and justice: with joy and humor! Who knew pink could be so powerful?! Who expected that “everyday women” could challenge the military-industrial complex; become leaders in the international movements against killer drones and torture, and for BDS; advocate on Capitol Hill and elsewhere for a more peaceful U.S. foreign policy, and much more?

Women make change. Women lead to peace with justice. Women are and will be makers of a better world, or there will not BE a better world. We women know all too well the grim truth that Marge Piercy put into a poem: “We make history, or history makes us.”

I am going to talk about CODEPINK’s during this Women’s History Month. But first, I’m going to start by listing 6 elements of change. They are easy(ier) to remember, because they all start with “I”.

The first elements of change: imagination and inquiry.

What we can imagine, we can make happen. Imagination almost always flies in the face of the status quo: “You can’t do that!” “We don’t have the votes!” “No one will want to join you!” “Media won’t cover your action…” etc ad nauseum. Imagining the world we want nurtures our readiness to take action.

Inquiry is interwoven with imagination. Who else is working, or has worked in the past, for the changes we want? How can we learn from them and/or be in alliance with them? What strategy and tactics can we adapt for our current situation? And so on...

The next two elements are most directly concerned with action: innovation and improvisation.

Since women have been shut out of the institutions of power for so long, we have always had to innovate, to be creative and think out outside the patriarchal box. “It’s always been done this way…” does not work for women making change. Connected to innovation is the capacity for improvisation: being flexible, nimble, able to use slender means to achieve large results. We will increasingly need to improvise, and to both teach it to, and learn it from, younger folks, in an era of turbulent climate change.

Two more elements of making change: to inform, and to inspire.

The changes we women aspire to make, and the changes that we succeed in making, must reach a wider public, and the historical record. Many women are published authors; how many have their writing included in anthologies and studied in universities? Many women over the centuries have made change for the better; we only have to look at our own histories of social change here in the Bay Area -- gay rights, racial justice, feminism, environmental protection, disabled access, and elders as political advocates  -- to know that women’s contributions have been crucial to all these struggles. Every month is Women’s History Month!

Yet how often, still, are women as social change leaders not invited to speak on the panels, not quoted or cited in the articles, not speaking on the radio, not portrayed honestly and in-depth in film and on TV?! And we are almost completely uncounted among the few titans of media who own many platforms and have control over the political narrative!

Inspire comes from the Latin for the in-breath, and we all need that deep breath of energy that stories of women making change can give us. By our words but even more by our actions - investing our time, talents, energy and money - we can and do inspire others, especially other women, to make the changes they want to see in the world.

For elder women especially, now is the time to write, tell, show our own stories, to teach what we have learned, to young and younger people, in whatever ways we can. And also to listen deeply and learn from them. I am blessed to be able to do that as a part of my CODEPINK work. Find or make those opportunities yourselves. A longtime CODEPINK organizer in Tennessee, Elizabeth Barger, is organizing a series of trainings in nonviolent action and theory. She told me on her recent visit that “I’m all about the training - we’ve got to pass this on, to a new generation.” Elizabeth is almost 80, and she is one of the most future-oriented women I know!

Inspiration loops back to imagination - energy into envisioning, envisioning into action.

Let’s get down to cases. With some of my CODEPINK colleagues, I wrote our “10 Peace Positions Every Presidential Candidate Should Take” - our platform for the 2016 election year. This week I’m finishing the extended statements for each one, which you can find on our blog, Pink Tank.

We are far from a world where the United States’ policies are guided by these peace positions. We are far from having a Democrat or Republican candidate for president affirm these 10 positions, or even a few of them. We are living through a terrible time in American politics - neoliberalism vs neofascism. Insults and threats, both personal against other candidates and nationalistic against other peoples of the world, are openly spewed out to raucous applause. Violence is incited from the stage by one of the candidates, and he carries on with impunity, as his supporters assault and bully protesters, including my colleague Chelsea Byers.

We live in a damaged world, and much of that damage has been paid for with our tax dollars. To quote Marge Piercy again:

“Some things we make better and some

are destroyed by greed and bad

politics. We live in the wake

survivors of a vast lethal typhoon

And a few American women who have made it into elite circles of power have been and are part of that destruction “by greed and bad politics.” Women making change do not always make beneficial change, especially when they are driven by their own ego needs and greed, and their close affiliations with the patriarchal powers of Wall Street, Hollywood, and/or the Pentagon. I don’t believe in a “Great Women” theory of social change, nor do I believe that women as tokens or “firsts” can bring about beneficial structural changes. At most, they can serve as guides to our imagination and continuing activism; at worst, they betray the anti-war, pro-justice roots of second wave feminism, and use, for their own selfish purposes, rather than lead or better yet serve, the people.

CODEPINK is a collective noun, and we act for and with the great majority of women everywhere who desire peace, in the sense of wholeness and health, not the peace of the graveyard, or of the bombed-out town whose residents have become desperate refugees. Here’s what we have done just this month:

-- hosted the first-ever, well-attended Saudi Summit in DC to examine the toxic relationship of the US government to the Saudi monarchy;

-- entered into an arrangement with Alternet.org to publish a regular series on the local peace economy campaign;

-- helped to deliver a petition signed by over 140,000 people demanding that Airbnb stop accepting vacation rental listings in the occupied West Bank;

-- spoke at a huge rally for International Women’s Day in Japan;

-- wore orange jumpsuits and called for closing Gitmo in the halls of Congress;

-- started a new website, codepink-in-germany, featuring the work of CODEPINK organizer Elsa Rassbach in Berlin, prepared to send our “Away Team” to Bayreuth to accept a prestigious peace prize and meet with anti-drones activists in Germany;

-- knitted hundreds of caps and scarves, and sewed cloth menstrual pads, for CODEPINK national staffer Nancy Mancias to take to refugees in Greece in April;

-- protested at AIPAC’s annual conference (and got arrested);

Tomorrow we will protest the neoliberal candidate and former Secretary of State in Los Angeles with the message: “You’re here to milk the cash cow; we’re here to say, Peace Now!”

And next week, our own Toby Blome will be in action with over 100 activists at Creech Air Force Base in Nevada in our second annual “Shut Down Creech!”

So, what can YOU do? Well, join and support CODEPINK, for starters. Remember those six “I” words, and imagine “I can do..."

Thank you for your kind attention, and I look forward to your questions and comments.