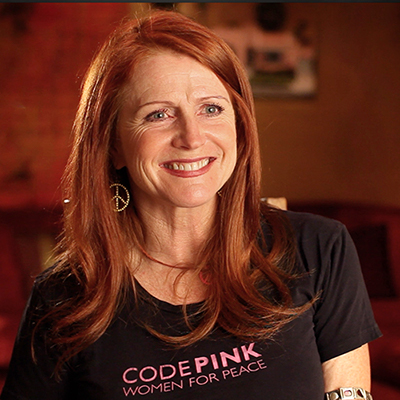 Jodie Evans is the co-founder of CODEPINK and the after-school writing program 826LA, and serves on the CODEPINK Board of Directors.  She has been a visionary advocate for peace for several decades. An inspired motivator, Jodie invigorates nascent activists and re-invigorates seasoned activists through her ever-evolving, always exciting methods to promote peace.  Whether in board rooms or war zones, legislative offices or neighborhood streets, Jodie’s enthusiasm for a world at peace infuses conciliation, optimism and activism wherever she goes.

Jodie is primarily focused on sharing a global vision for peace and social justice. In 1999, she co-created the Peace Conference in Dubrovnik centered on "Imagining Peace in the 21st Century." and she continues to produce the multi-event World Festival of Sacred Music that takes place in Los Angeles every 3 years.

Since the start of the 2003 Iraq War, Jodie has traveled to Iraq, Afghanistan, Iran and Jordan on several occasions.  On her most recent visit to Jordan, Jodie traveled with a peace coalition to meet with Delegates from the Iraqi Parliament to institute an action plan for peace and reconciliation. She has also traveled to Cuba to protest the prison facility at Guantanamo, and in 2015 she was one of 30 women activists from fifteen countries who crossed the demilitarized zone between North and South Korea, calling for peace and reconciliation between the two countries.

Jodie is a revolutionary whose commitment to social change is evidenced through several documentary films she has produced over the years, starting with the 1999 film Stripped and Teased: Tales from Las Vegas Women, a very personal look at the real women who work and live in Jodie’s hometown of Las Vegas, Nevada.  She has also produced The People Speak, based on Howard Zinn's "A People's History of the United States," and the Oscar-nominated documentary The Square, which vividly captured the profound 2011-2012 democratic uprisings in Egypt. In 2015 she executive produced the climate change documentary This Changes Everything and also The Brainwashing of my Dad, a film that turns the lens on the rise of the right-wing media apparatus.

Jodie spent her youth on her great-grandfather’s farm in the Missouri Ozarks, which instilled in her a deep love of farming and farmers. In partnership with Andrew Beath at Ocean Song, a farm and wilderness center in Northern California, she has witnessed how a community gifted with land can thrive, turning the land into rich soil for the growth of human beings.  Inspired by the success of Ocean Song, Jodie partnered with Paul Hawken and Lekha Singh to become a caretaker for Two Rivers and Mohawk Love Farms in Springfield, Oregon.  She is also on the board of directors of the Center for New Economics and she is a tireless advocate of the slow food and slow money movements, supporting local production and local consumption and encouraging economic development in the local regional economy.

Jodie is the co-editor of two books, "Twilight of Empire: Responses to Occupation" and "Stop the Next War Now: Effective Responses to Violence and Terrorism" and a contributor to “Beautiful Trouble: A Toolbox for Revolution.”  She is currently writing a book about divesting from the unjust, extractive war economy and building a just, sustainable peace economy.