Senator Harry Reid and Guns: Time to Take a Stand

When CODEPINK, MoveOn and representatives of other organizations marched into Senator Harry Reid’s DC office on Tuesday, December 18, they wanted a simple answer to a simple question: Does the Senator support a ban on assault weapons and high-capacity clips, such as the legislation proposed by Senator Dianne Feinstein and supported by President Obama and Vice President Biden? It would seem like a no-brainer for the Senate Majority Leader to fall in line with the leadership of his party in backing a modest bill that would ban the sale of weapons that are only good for mass murder. Unfortunately, Reid’s senior policy advisor Kasey Gillette was unable to give an answer.

While there is a lot of talk in Democratic circles about Republicans standing in the way of sensible gun laws, a hidden secret is that the Democratic Senator leader from Nevada, who is key to getting gun control legislation passed in this country, has been as pro-gun
as most Republicans.

In the past, Reid has touted the rights of gun owners and eagerly sought the NRA's endorsements, contributions and praise. In 2004, Reid was one of the rare Democrats to be endorsed by the NRA. In 2009 he sought to please the powerful lobby by supporting a controversial bill to allow gun owners with concealed weapon permits to cross state lines. The legislation, which was vehemently opposed by the Brady Campaign to Prevent Gun Violence, fell just two votes short of the 60 votes needed. The NRA, however, was delighted that Reid had supported the bill and allowed it to be brought to the floor for a vote.

In 2010, when Reid was engaged in a bitter re-election campaign against Republican Sharron Angle, the NRA refrained from endorsing, but contributed to Reid’s campaign and reminded voters of his pro-gun record. An NRA letter to its Nevada members touted that Reid “opposed the Obama administration’s interest in reinstating the assault weapons ban, halting momentum; helped pass a law that allows gun owners to carry firearms in national parks; voted against the District of Columbia’s gun ban; voted for legislation to allow pilots in commercial airline cockpits to be armed.” It also noted that Reid was instrumental in passing legislation halting lawsuits that were attempting to hold gun manufacturers and dealers responsible for weapons used in criminal acts.

NRA head Wayne LaPierre called Senator Reid “a true champion of the Second Amendment” and said “no one has been a stronger advocate for responsible gun ownership than him.”

After the Aurora, Colorado movie theater shootings in July 2012, Senator Reid blocked any debate about gun control, insisting that the Senate schedule was “too packed” to spend time on it.

After this latest tragedy at Sandy Hook that left 20 children dead, Reid took a timid step forward, saying it was time to “engage in a meaningful conversation and thoughtful debate about how to change laws and culture that allow violence to grow." Hinting at a softening of his position, he said that as we discuss how best to protect our nation’s children, “every idea should be on the table.” 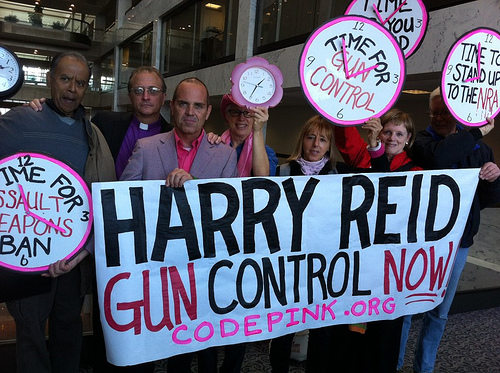 But for the gun control advocates in his office on Tuesday, Reid’s faint-hearted call for reform was not nearly enough. With alarm clocks in hand, they said the time for discussion was long past; they wanted action. They said it was time for Senator Reid to stand up to the NRA and to use his leadership to protect our children, not the gun manufacturers.

New York Mayor Michael Bloomberg has been making the same demand. “Calling for 'meaningful action' is not enough," he said. "We need immediate action. We have heard all the rhetoric before. What we have not seen is leadership -- not from the White House and not from Congress. That must end today. This is a national tragedy and it demands a national response."

In a move that seems to heed the call for action, President Obama just appointed Vice President Joe Biden to lead a task force on new gun laws. Senator Dianne Feinstein said she will introduce legislation early next year to ban the sale of new assault weapons, as well as big clips, drums and strips of more than 10 bullets. Even Virginia's Mark Warner, one of the few staunch pro-gun Senate Democrats, reversed course to back restrictions on assault weapons, declaring that "the status quo is not acceptable anymore.”

With 20 children dead, President Obama insisting that preventing gun violence will be a second-term policy priority, and Harry Reid not facing re-election until 2016, perhaps the Senator will now be willing to stand up to the NRA? The clock is ticking.

Medea Benjamin is cofounder of www.codepink.org and www.globalexchange.org. She is author of the recent book Drone Warfare: Killing by Remote Control.