Two young Jewish-American women, including CODEPINK organizer extraordinaire Rae Abileah, are currently on a two-week citizen diplomacy trip in Iran  working for political and religious peace. Abileah, 26, of California's Bay Area and Ariel Vegosen, 28, of New York City, are two of a handful of Americans visiting there in an interfaith group to meet with various Iranian women's groups, interfaith organizations and, if plans hold up, some government officials. Under the guidance of Fellowship for Reconciliation, the interfaith group that organized the trip, they hope to foster understanding and peace between Americans and Iranians on a grassroots level, more important now than ever. 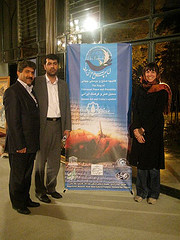 Rae's having trouble logging onto this site to post her experience, but she has posted some amazing photos of the trip so far on Flickr! (That's her above). Check them out here.