Learn about U.S. aggression against Cuba and what we're doing to be in solidarity with the Cuban people.

Many of us at CODEPINK have been spent years as activists in solidarity with the people of Cuba. The U.S. blockade against Cuba has been going on for over 60 years and the Trump administration imposed another 243 sanctions that have made life increasingly difficult for ordinary people on the island. We condemn the U.S. hybrid war on Cuba and are working on everything from ending the blockade, to removing the Trump sanctions and uplifting the incredibly international solidarity that Cuba shows. Cuba Si, Bloqueo No! 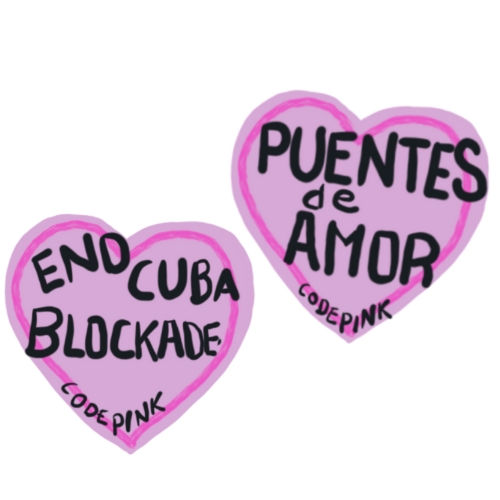 A message from Cuba, with love...

Art and Culture in Cuba

A Call for Immediate U.S. Assistance to Fire Disaster in Cuba

A Call for Immediate U.S. Assistance to Fire Disaster in Cuba

Let’s Send Milk to the Children of Cuba!

Let’s Send Milk to the Children of Cuba!

U.S. Sanctions in the time of Coronavirus

Bolsonaro on the Coronavirus: A tropical Trump, or worse?

The Struggle against Sanctions: The Case of Venezuela

October 29, 2021 - WTF is Going on in Latin America & the Caribbean: Vaccines, Protests and the Cuban Youth

This week we are joined by Lauren Rosenfeld from CODEPINKs Peace Collective and Rose and Michelle from the Party for Socialism and Liberation. Michelle, Rose, and Lauren just got back from a youth delegation to Cuba where they got to tour the international school of Medicine and witness Cuban elections.

Episode 170: Solidarity with Cuba, Opposition to NATO & Cheers for The Golden Rule Sailboat

Episode 170: Solidarity with Cuba, Opposition to NATO & Cheers for The Golden Rule Sailboat: In this episode Marcy Winograd, coordinator of CODEPINK Congress, interviews her co-host Medea Benjamin on Medea's recent solidarity trip to Cuba and post midterm election prospects for lifting sanctions on the island nation Next, Tamara Lorincz of the Women's International League for Peace and Freedom challenges NATO as an offensive alliance that threatens world peace, and finally we hear from Helen Jacard and Gerry Condon of Veterans for Peace on The Golden Rule, an anti-nuclear sailboat journey to promote the Treaty on the Prohibition of Nuclear Weapons.

Play this episode 55 minutes
Episode 145: Esper on Venezuela and the People's Summit