Boeing expects to rake in HOW MUCH from COVID-19??? 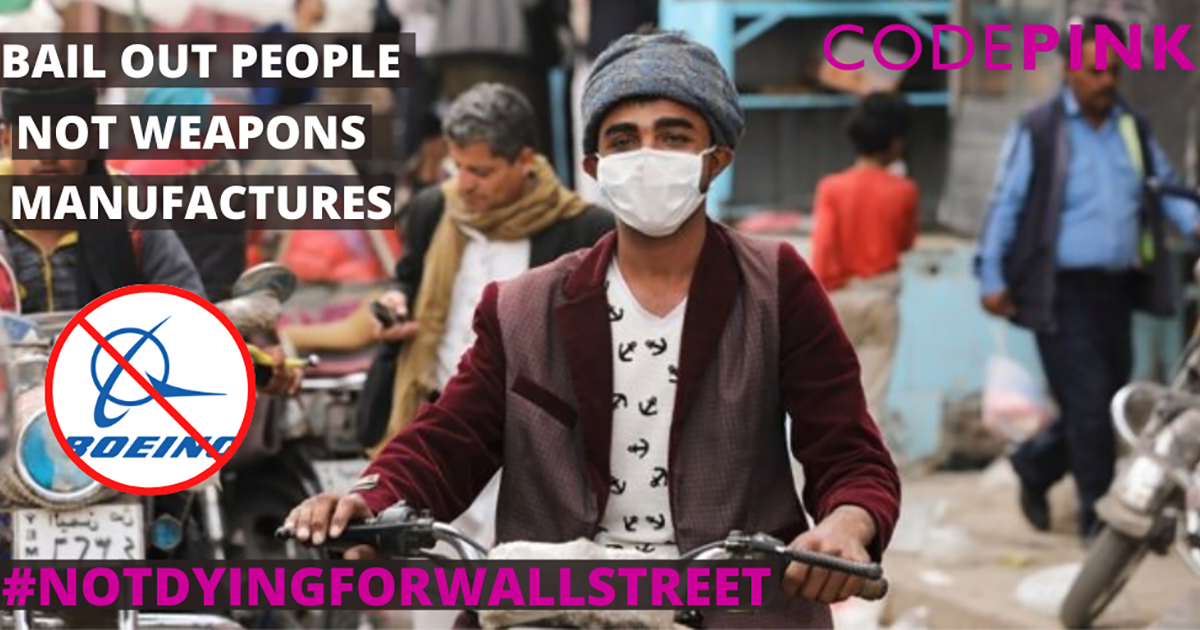 We are in the midst of a global pandemic the likes of which we have never seen before. While up to 30% of the American population might soon be out of work and everyday people are struggling to afford basic necessities like food and rent, Boeing has the audacity to demand a $60 billion taxpayer bailout for their shareholders and CEO. An economic package is being negotiated right now in Congress and will go for a vote in the Senate as early as today, but it is up to us to look at where that money is going. Tell your Senators that not a penny should go to bail out Boeing or other weapons manufacturers. Federal rescue packages must be for people’s needs, not corporate greed.

The rapid spread of COVID-19 is exposing the deep cracks in the foundation of American society which, over the past 50 years, has steadily siphoned more and more of our tax dollars into corporations like Boeing that manufacture warplanes as well as defective civilian planes that plummet from the sky in mid-flight. This week during a Senate GOP lunch, there were many Republicans drooling over the idea of giving taxpayer dollars to General Electric and Boeing. But even some in that party weren’t having it. Senator Cruz tweeted that he was opposed to "a special carve-out" for the two companies, stating that, "Millions are losing jobs; we don’t need bailouts or corporate welfare—those companies should participate in the same liquidity programs as everyone else."

What is happening right now is horrific and causing great suffering, but it is also providing us with a unique opportunity to reevaluate our values and the ways that we live. Out of necessity, people are being released from jails prisons. Satellite readings from the European Space Agency show that the levels of nitrogen dioxide (NO2) hanging over cities and industrial clusters in Asia and Europe have been markedly lower over the past six weeks. Since March 9, when Italy went under lockdown, the NO2 levels over Milan and other parts of northern Italy have fallen by a whopping forty percent.

Many of us are gripped by fear and isolation right now, but the last thing we want to get back to business as usual — the business of war, inequality, environmental destruction and corporate rule. Tell your Senators not to pass an economic rescue package that bails out the merchant of death: Boeing.

And while many of us have more time on our hands, let’s use it to learn more about the world. Check out the great webinars we have coming up, and the suggestions from our Pink Team (below) about our favorite foreign films to watch.

In the coming days/weeks, we will be hosting the following webinars:

The rescue package could go to a vote at any moment. Make sure your Senators know that you do not want it to include a bailout for Boeing!