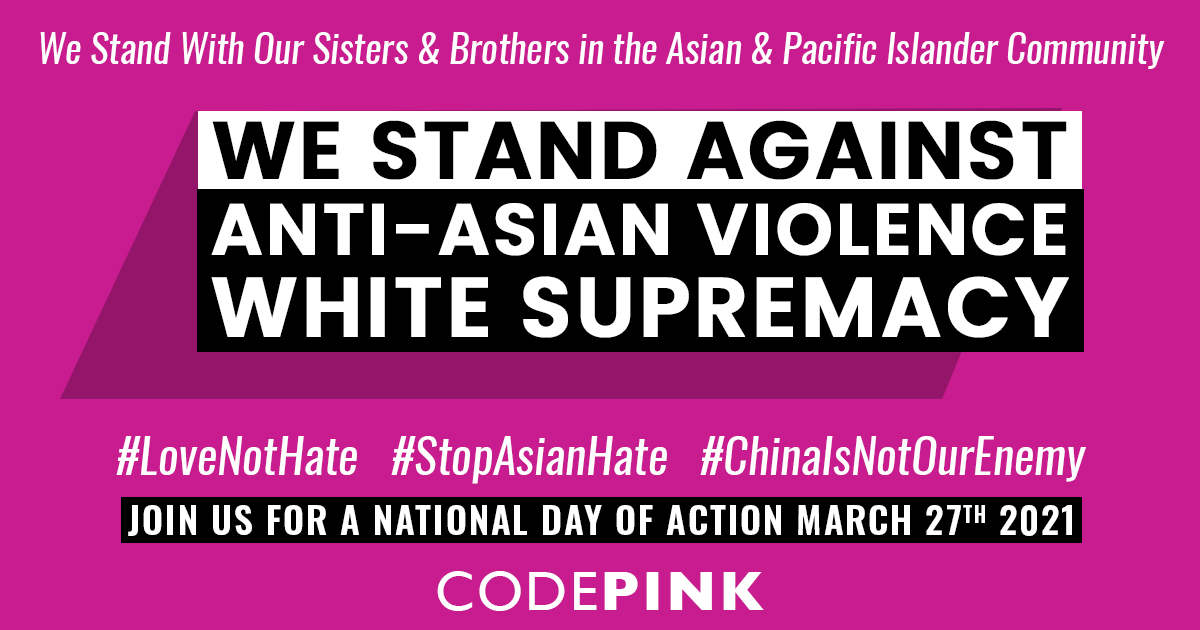 CODEPINK, the ANSWER Coalition, Pivot to Peace, the Chinese Consolidated Benevolent Association, the Asian Pacific Islander American Public Affairs (APAPA), Qiao Collective, Labor Against Racism and War and more (full list of endorsing organizations) stand in solidarity with the Asian & Asian American community in the midst of the horrific, racist and misogynist massacre that took place in Atlanta on March 16th. Six Asian women were among the eight shot to death at point-blank range.

The alarming rise in anti Asian-violence over the past year correlates to an increasingly hostile U.S. foreign policy towards China. The opportunistic scapegoating of China during the onset of the COVID-19 pandemic, coupled with the intensity by which China is deemed the enemy and adversary of the United States, has driven a widespread Sinophobic sentiment nationally. The Asian American community suffers the brunt of the hatred fomented as a weapon of war. To date, there have been 3,800 self-reported hate crimes against Asian Americans.

The mainstream media’s failure to label the Atlanta shooting as racially-motivated crime demonstrates the gross disregard and injustice that our communities are facing. Racism is a sick symptom of a system that profits from war and violence. And to put insult to injury, the cop handling the case was found to be promoting anti-China paraphernalia.

Join us on March 27th for a national day of action demanding an end to anti-Asian racist violence, an end to violence against women and end to white supremacy now!

CITIES YOU CAN JOIN BELOW:

& MORE TO COME! Contact [email protected] to start an event in your city!