Why Peace People Should Care About Money in Politics 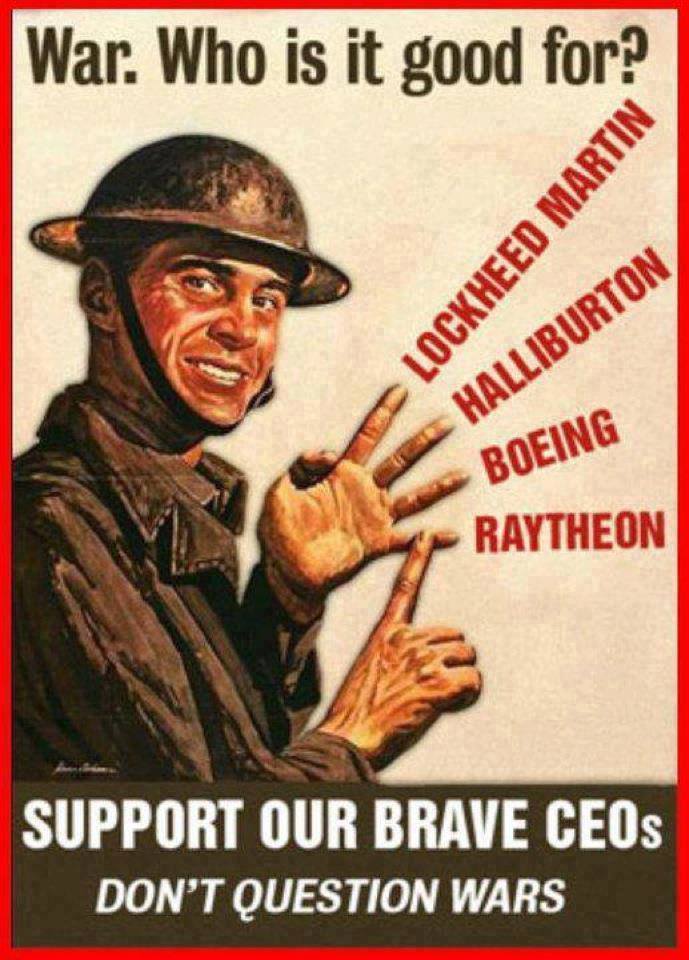 The 2016 presidential elections are proving pivotal in U.S. history, although not just for the self-proclaimed socialist-democrat Bernie Sanders, the feminist squabble unfolding around Hillary Clinton, the larger-than-life wild card Donald Trump, or the robot Marco Rubio.

The elections are revealing more dramatically than ever the corrosive effect of big money on the U.S. government's decayed democracy, elections that are predicted to be the most expensive in U.S. history.

In a country founded on the principle that every white male - and then eventually every citizen - has an equal voice and an equal vote, how is money stealing center stage in the upcoming elections?

The damning 2010 Supreme Court case Citizens United v. Federal Election Commission by a 5-4 ruling determined that corporations can spend unlimited amounts of money to support specific candidates, as long as they don’t contribute directly to campaigns. The subsequent Supreme Court case SpeechNow.org vs. FEC eliminated fundraising limits for corporations. Thus emerged Super PACs and political nonprofit groups - 501(c)s that aren’t required to disclose their donors - that raise and spend unchecked amounts of money to buy “free” elections in the interests of the rich.

In the wake of these cases, the 2012 presidential election was the most expensive election in U.S. history. More than $3 million was spent by 501(c) groups, and $6 billion was spent overall.

But the greedy paws of big money still hadn’t taken enough. In 2014, in another Supreme Court case, McCutcheon vs. FEC, the cap on the total amount of money an individual can contribute to all candidates, PACs, and parties combined in a two-year election period, which at the time was $123,000, was eradicated. The ramifications are clear. The U.S. is approaching the most money-drenched election yet. $438 million has already been raised by presidential candidates, and $346 million by Super PACS, all before we've even made it out of primary season!

The integrity of the United States democracy is being undermined by money in our political system. The U.S. is plummeting down a slippery slope, at the bottom of which is a small group of the most privileged in society, pockets stuffed with Jacksons and Franklins, drowning out the 99% who are not so slowly disappearing from the political system. But what does all of this money have to do with U.S. militarism? Why do peace people care?

Peace people care because war is about money too. While millions of individuals all over the world are being obliterated by U.S. waged wars and violence, a small few are making billions.

The military-industrial sector of the U.S. economy is “one of the most powerful in politics” according to Open Secrets, having contributed just under $29 million to political candidates and committees in the 2012 campaign cycle alone. Since 1990, the sector has contributed $200 million to political candidates. The main contributors? The notorious weapons manufacturers Lockheed Martin, Northrop Grumman, Boeing, Raytheon, and General Dynamics. Their goals? To secure government military contracts and influence the nation's budget to make those contracts more likely. The more contracts they make, the more wars the U.S. government wages, and the more money they take. And they’re doing a pretty great job.

Lobbyists working on behalf of weapons manufacturers and other military-industrial interest groups target House and Senate members who sit on the Armed Forces and Appropriations Committees, the people who are deciding the U.S.'s military spending. The total money spent by these lobbyists in 2014 was $126 million. Mac Thornberry, Chairman of the House of Armed Services Committee, received the largest sum in 2015 totaling $256,050. John McCain, Chairman of the Senate Committee on Armed Services, received the second largest sum at $186,250. Secretary of State Hilary Clinton received the third largest sum at $155,340. When receiving hundreds of thousands from military-industrial lobbyists, it is no surprise that Thornberry, McCain, and Clinton have repeatedly chosen expensive war over diplomacy and peace, quite literally paying back their buddies from the military-industrial sector.

Also unsurprisingly, the 5 largest contracts made by the federal government every year from 2009-2014 were with weapons manufacturers Lockheed Martin, Boeing Company, General Dynamics, Raytheon, and Northrop Grumman. In 2014, the U.S. gave a total of over $90 billion to just these 5 corporations. Within various iterations of the defense budget for 2016 are stipulations for 12 new F/A-18E/F Super Hornets, attack aircrafts manufactured by Boeing, 6 new F-35B Joint Strike Fighters, and 57 F-35 Joint Strike Fighters, both manufactured by Lockheed Martin. And this is despite the fact that the U.S. government has sunk $1.45 trillion into Lockheed Martin's F-35s, which can’t fire their own guns until 2019 due to software issues, when they will be able to fire can only carry a small amount of ammunition, and are notorious for engine malfunctions that have caused jets to catch fire before taking off. In a scathing article in U.S. Uncut, Tom Cahill points out that the same $1.45 trillion that has gone towards this failure of a fighter could provide tuition-free public higher education for every student in the U.S. for the next 23 years. 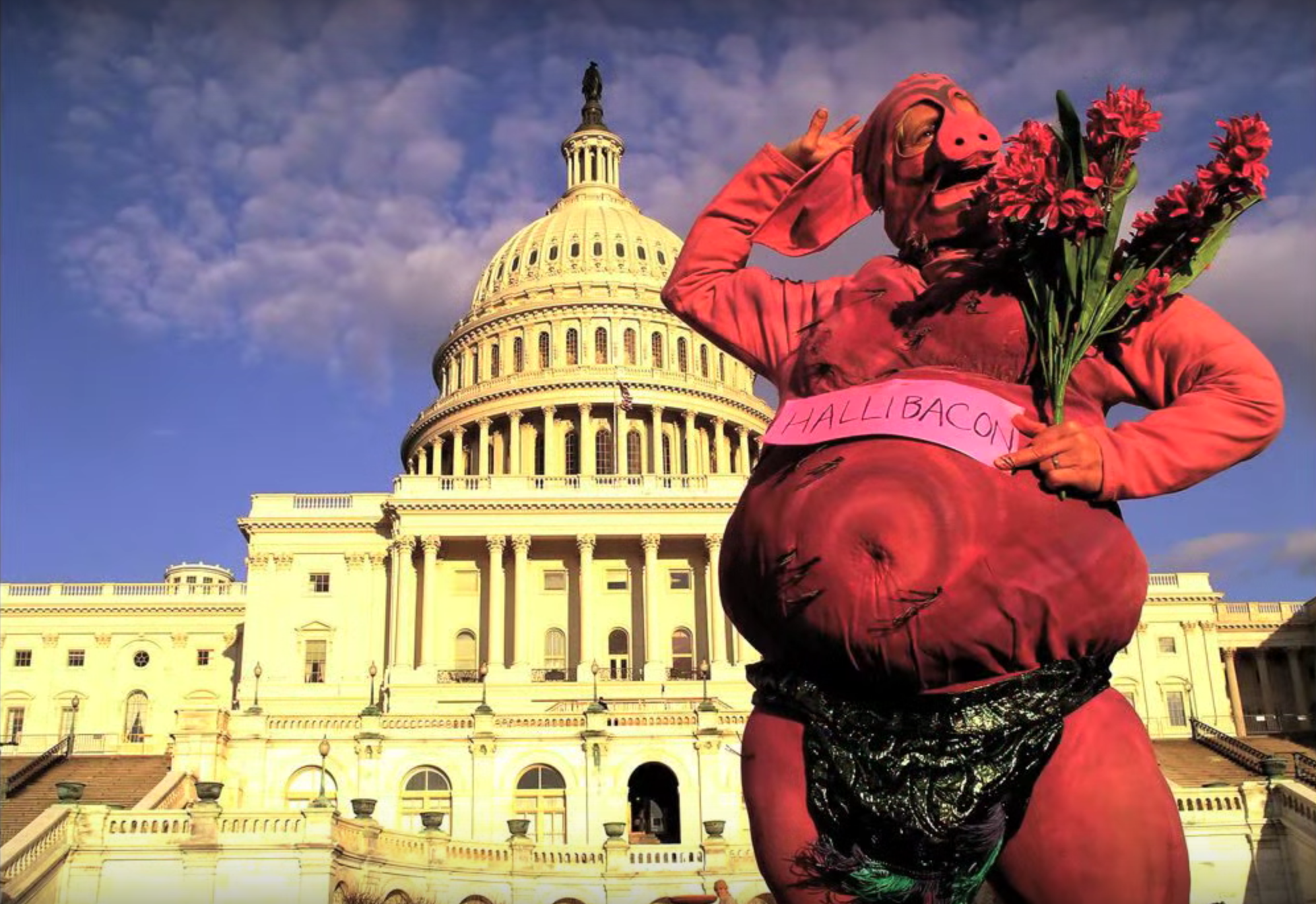 There are also private contractors who made massive profits off of the Iraq war: just the mention of Halliburton conjures an image of something like the one above. The U.S. gave $138 billion to private contractors during the war in exchange for security, power plants, food, and more. Of that amount, 52% went to just 10 companies. The top money maker? KBR, the former subsidiary of Halliburton that has for years conducted illegal business in government-sanctioned countries. Halliburton’s former CEO? Dick Cheney, Bush’s vice-president during the Iraq invasion, who, although he lied about it, continued to receive compensation from the company during his vice-presidency following his alleged severance. Is it a mystery then why he would push for war and ignore the voices of the masses screaming for the war to stop?

"Hallibacon" and other military-industrial corporations make their enormous profits from U.S. citizens' taxes, as federal appropriations funnel huge sums towards military expenses. Since 2000, Defense has been one of the top three biggest federal programs. Obama’s most recent budget proposal for 2017 allocates $632 billion, or 15% of our total $4.2 trillion budget to military, which accounts for a whopping 54% of his proposed discretionary spending.

The U.S. defense budget can also be misleading, as it often doesn't account for Overseas Contingency Operations (OCO) funding. OCO funding first entered the federal budget process as a way for Bush to continue to fund the ever-extending, more expensive U.S. wars in Afghanistan and Iraq. It has received severe criticism, earning the label of "slush fund," including in mainstream media. It allows the President and Congress to funnel unchecked amounts of money towards the military-industrial sector, bypassing the Budget Control Act of 2011, under the guise of urgent war needs. At its peak in 2008, $187 billion was allocated to OCO. Obama’s most recent budget for 2017 allocates $59 billion for OCO, as part of his total $632 for all defense spending. This includes a $524 billion base budget for the Department of Defense - a $2 billion increase from 2016 - with just $7.5 billion specifically for fighting ISIS. In addition, Obama has allocated $40 billion for nuclear weapons, foreign military assistance, and “defense-related activities."

The amount spent on military is even worse when contextualized within the total federal budget. Obama's proposed 2017 budget, as well as the budget for the fiscal year of 2015, allocated 54% of discretionary spending – funds that are assigned by Congress annually – to the Pentagon. That was compared to 6% for education, and 3% for energy and environment in 2015. In the 2017 budget proposal, the Pentagon included a meager $52.7 billion for diplomacy. Why, in the eyes of the President and Congress, is war 9x more important than education, 18x more important than environment, and 11x more important than peace and diplomacy?

As depressing as the facts and figures of the U.S. war spendings are, they too are gross underestimates. While many have stuck the price tag of billions on the Iraq war in particular, estimates often fail to account for the cost of diagnosing, treating, and compensating disabled veterans; increased prices of oil that resulted from war in the region; and interest money accruing on huge financial deficits due to war spending. Esteemed scholars Joseph E. Stiglitz and Linda J. Bilmes in 2008 estimated that the war cost $3 trillion when taking these issues into account, and two years later they revealed that even that $3 trillion might have been a conservative estimate. Given all of this, how can anyone justify war?

Some will say because of the jobs that the military creates, although a $1 billion investment in military spending creates only 11,600 jobs compared to 29,100 for the same investment in education. Some will say it's to make us safer, although aggressive U.S. military response following 9/11 – invasions of Iraq and Afghanistan, NATO bombing of Libya, drone strikes in Pakistan and Yemen – have only further destabilized the region, opening the doors to Islamic terrorist groups like ISIS to harness control with the collapse of legitimate governments. U.S. citizens are not safer with threats being hurtled across oceans by countries and extremist groups, and the soldiers and civilians that have lost their lives are definitely not safer.

And yet the war wages, and so peace people care about money in politics. War is and always has been a money game played by a few but paid for by the rest. Now our Supreme Court has sold the freedom of U.S. citizens to the greedy and the wealthy. Private interests devour dollars derived from death and violence. Weapons manufacturers and other military-dependent corporations wine and dine our elected officials and lobby to prioritize war above all else. And the citizens pick up the trillion dollar bill.

There will be no tip, but we've reached our tipping point. CODEPINK is joining hundreds of other endorsing organizations from the peace, labor, environment, black lives matter, and other social justice movements along with thousands of individuals in a series of direct actions this April. In Democracy Spring / Democracy Awakening we are reclaiming our democracy and calling for big money out of politics with a 9-day march from Philadelphia to D.C., 6 days of sit-ins at the Capitol, educational teach-ins, a rally, and a day of lobbying. Join us to release the chokehold the military industrial complex has on our political system, and to re-prioritize humanity & diplomacy over profit & death.