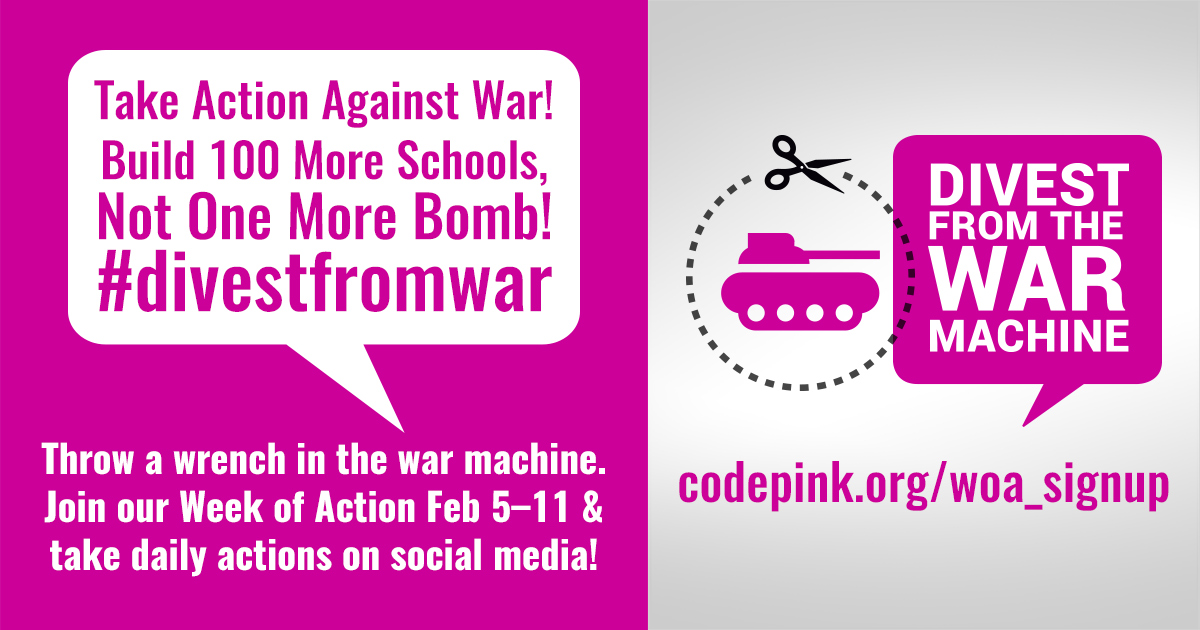 What are we doing?

Join us for a fun and creative Week of Action the first full week of February to bring the Divest from the War Machine campaign to your community!

The Divest from the War Machine Week of Action will be a collage: a variety of actions around the country to shine a light on the many different ways the War Machine interacts with our institutions and daily lives, and how we can take action to throw a wrench in the war machine! Groups will host their own creative actions to highlight the pervasiveness of war and militarism in every aspect of our society, and show that we ALL have the power to divest from the war machine.

What kind of actions are we talking about?

Do something to educate people. Do something to expose how deeply embedded war and militarism is in our culture and in our institutions. Do something to call out those who are making a killing from killing. The options are endless! See an expanded list of suggested actions below.

Organize a street stall to inform people that a local organization is investing in the arms trade. Host a “die-in” at your City Hall and circulate a petition urging your City Council to stop making a killing on killing (collect signatures outside of your local grocery store!). Publish ads in your local newspaper opposing military recruitment in your city’s schools. If you’re a student, head into your school’s quad with pictures of suffering Yemeni children to show your peers what your university is supporting by investing in war pro teers. If you live near a Lockheed Martin facility, grab some friends, make some signs, and gather to expose the role that these merchants of death play in violence here at home and abroad.

How to get involved