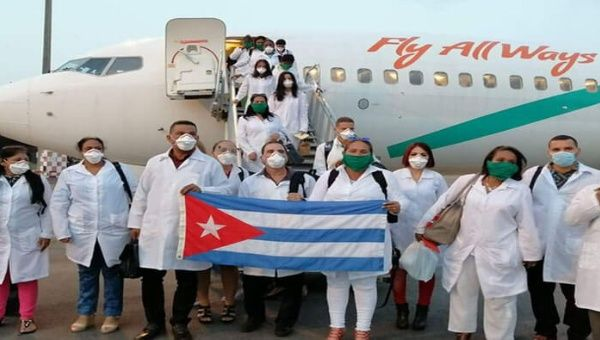 A team of 85 Cuban doctors and nurses arrived in Peru on June 3 to help the Andean nation tackle the coronavirus pandemic. That same day, Secretary of State Mike Pompeo announced another tightening of the sanctions screws. This time he targeted seven Cuban entities, including Fincimex, one of the principal financial institutions handling remittances to the country. Also targeted was Marriott International, which was ordered to cease operations in Cuba, and other companies in the tourism sector, an industry that constitutes 10 percent of Cuba’s GDP and has been devastated globally by the pandemic.

It seems that the more Cuba helps the world, the more it gets hammered by the Trump administration. While Cuba has endured a U.S. embargo for nearly 60 years, Trump has revved up the stakes with a “maximum pressure” strategy that includes more than 90 economic measures placed against the nation since January 2019. Josefina Vidal, Cuba’s ambassador to Canada, called the measures “unprecedented in their level of aggression and scope” and designed to “deprive the country of income for the development of the economy.” Since its inception, the embargo has cost Cuba well over $130 billion dollars, according to a 2018 estimate. In 2018-2019 alone, the economic impact was $4 billion, a figure that does not include the impact of a June 2019 Trump administration travel ban aimed at harming the tourist industry.

While the embargo is supposed to have humanitarian exemptions, the health sector has not been spared. Cuba is known worldwide for its universal public healthcare system, but the embargo has led to shortages of medicines and medical supplies, particularly for patients with AIDS and cancer. Doctors at Cuba’s National Institute of Oncology have had to amputate the lower limbs of children with cancer because the American companies that have a monopoly on the technology can't sell it to Cuba. In the midst of the pandemic, the U.S. blocked a donation of facemasks and COVID-19 diagnostic kits from Chinese billionaire Jack Ma.

Not content to sabotage Cuba’s domestic health sector, the Trump administration has been attacking Cuba’s international medical assistance, from the teams fighting coronavirus today to those who have travelled all over the world since the 1960’s providing services to underserved communities in 164 countries. The U.S. goal is to cut the island’s income now that the provision of these services has surpassed tourism as Cuba’s number one source of revenue. Labeling these volunteer medical teams “victims of human trafficking” because part of their salaries goes to pay for Cuba’s healthcare system, the Trump administration convinced Ecuador, Bolivia and Brazil to end their cooperation agreements with Cuban doctors. Pompeo then applauded the leaders of these countries for refusing “to turn a blind eye” to Cuba’s alleged abuses. The triumphalism was short-lived: a month after that quote, the Bolsonaro government in Brazil begged Cuba to resend its doctors amid the pandemic. U.S. allies all over the world, including in Qatar, Kuwait, South Africa, Italy, Honduras and Peru have gratefully accepted this Cuban aid. So great is the admiration for Cuban doctors that a global campaign has sprung up to award them the Nobel Peace Prize.

The Trump administration is not just libelling doctors, but the whole country.  In May, the State Department named Cuba as one of five countries “not cooperating fully” in U.S. counterterrorism efforts. The main pretext was the nation’s hosting of members of Colombia’s National Liberation Army (ELN). Yet even the State Department’s own press release notes that ELN members are in Cuba as a result of “peace negotiation protocols.” Cuban Foreign Minister Bruno Rodríguez called the charges dishonest and “facilitated by the ungrateful attitude of the Colombian government” that broke off talks with the ELN in 2019. It should also be noted that Ecuador was the original host of the ELN-Colombia talks, but Cuba was asked to step in after the Moreno government abdicated its responsibilities in 2018.

The classification of Cuba as “not cooperating” with counterterrorism could lead to Cuba being placed on the U.S. State Sponsors of Terrorism list, which carries tougher penalties. This idea was floated by a senior Trump administration official to Reuters last month. Cuba had been on this list from 1982 to 2015, despite that fact that, according to former State Department official Jason Blazakis, “it was legally determined that Cuba was not actively engaged in violence that could be defined as terrorism under any credible definition of the word.”

Of course, the United States is in no position to claim that other countries do not cooperate in counterterrorism. For years, the U.S. harbored Luis Posada Carriles, mastermind of the bombing of a Cuban civilian airplane in 1976 that killed 73 people. More recently, the U.S. has yet to even comment on the April 30 attack on the Cuban Embassy in Washington D.C., when a man fired on the building with an automatic rifle.

While there are certainly right-wing ideologues like Secretary Pompeo and Senator Rubio orchestrating Trump’s maximum pressure campaign, for Trump himself, Cuba is all about the U.S. elections. His hard line against the tiny island nation may have helped swing the Florida gubernatorial campaign during the midterm elections, yet it’s not clear that this will serve him well in a presidential year. According to conventional wisdom and polls, younger Cuban-Americans - who like most young people, don’t tend to vote in midterms - are increasingly skeptical of the U.S. embargo, and overall, Cuba isn’t the overriding issue for Cuban-Americans. Trump won the Cuban-American vote in 2016, but Hillary Clinton took between 41 and 47% percent of that electorate, significantly higher than any Democrat in decades.

As an electoral strategy, these are signs that Trump’s aggression towards Cuba may not pay off. Of course, the strategy might not be just about votes but also about financing and ensuring that the Cuban-American political machinery is firmly behind Trump.

The strategy has certainly not paid off when it comes to achieving the goal of regime change. The Trump administration is arguably farther from achieving regime change in Cuba now than the U.S. has ever been in over 60 years of intervention. During Trump’s tenure, Cuba calmly transitioned from the presidency of Raul Castro to that of Miguel Díaz-Canel. In 2019, Cuban voters overwhelmingly ratified a new constitution. These aren’t signs of a country on the brink of collapse.

All Trump has achieved is making life more difficult for the island’s 11 million inhabitants, who, like people all over the world, have been battered by the economic impact from coronavirus. Tourism has collapsed. Income from remittances has tanked (both because of new U.S. restrictions and less income in the hands of the Cuban diaspora). Venezuela, once a major benefactor, is mired in its own crisis. But Cuba’s economy, which was forecast to contract by 3.7% before the pandemic hit, has been through worse, particularly during the 1991 to 2000 economic crisis known as the “special period” after the collapse of the Soviet Union.

A change in the White House would bring some relief, although Joe Biden has staked a rather ambivalent position, saying he would restore relations as President Obama did, but adding that he was open to using sanctions as punishment for Cuba’s support to the Venezuelan government.

It’s clear that from now until November, and perhaps for four more years, the Trump administration will pummel its island neighbor. Cuba will continue to seek global condemnation on the blockade (the 2019 UN vote was 187 against vs 3 in favor—the U.S., Brazil and Israel) and continue to show what a good neighbor looks like. It responded to these latest provocations in the way that only Cuba does: with more global solidarity, sending Covid-19 healing brigades to Guinea and Kuwait a day after the June 3 round of sanctions. A total of 26 countries now have Cuban medical personnel caring for their sick.

That is the kind of goodwill that money just can’t buy and it greatly presents a stark contrast to the Trump administration’s shameful behavior during the pandemic. Back in March, as Cuban doctors arrived in Italy, former Ecuadorian President Rafael Correa tweeted: “One day we will tell our children that, after decades of movies and propaganda, at the moment of truth, when humanity needed help at a time when the great powers were in hiding, Cuban doctors began to arrive, without asking anything in return.”

Medea Benjamin is an author/activist, and cofounder of the peace group CODEPINK. Leonardo Flores is a Latin American policy expert and a campaign coordinator with CODEPINK. For more on the Nobel Prize for Cuban Doctors campaign, see www.cubanobel.org.