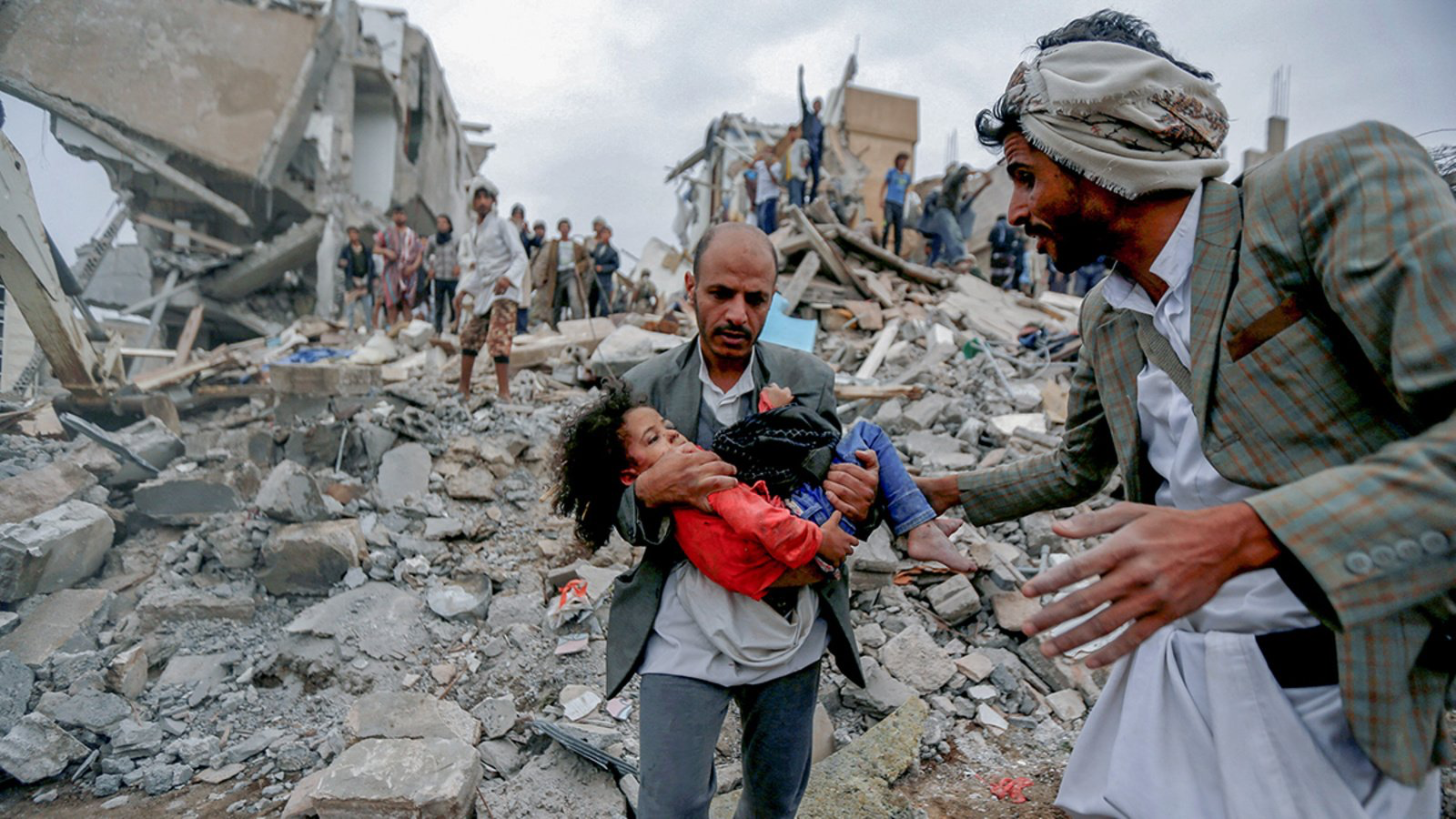 Donald Trump loves executive orders as a tool of dictatorial power, avoiding the need to work through Congress. But that works both ways, making it relatively easy for President Biden to reverse many of Trump’s most disastrous decisions. Here are ten things Biden can do as soon as he takes office. Each one can set the stage for broader progressive foreign policy initiatives, which we have also outlined.

1) End the U.S. role in the Saudi-led war on Yemen and restore U.S. humanitarian aid to Yemen.

The U.S. should also accept its share of responsibility for what many have called the greatest humanitarian crisis in the world today, and provide Yemen with funding to feed its people, restore its healthcare system and eventually rebuild this devastated country. Biden should restore and expand USAID funding and recommit U.S. financial support to the UN, the WHO, and to World Food Program relief programs in Yemen.

2) Suspend all U.S. arms sales and transfers to Saudi Arabia and the United Arab Emirates (UAE).

Both countries are responsible for massacring civilians in Yemen, and the UAE is reportedly the largest arms supplier to General Haftar’s rebel forces in Libya. Congress passed bills to suspend arms sales to both of them, but Trump vetoed them too. Then he struck arms deals worth $24 billion with the UAE as part of an obscene military and commercial ménage à trois between the U.S., the UAE and Israel, which he absurdly tried to pass off as a peace agreement.

While mostly ignored at the behest of the weapons companies, there are actually U.S. laws that require the suspension of arms transfers to countries that use them to violate U.S. and international law. They include the Leahy Law that prohibits the U.S. from providing military assistance to foreign security forces that commit gross violations of human rights; and the Arms Export Control Act, which states that countries must use imported U.S. weapons only for legitimate self defense.

Once these suspensions are in place, the Biden administration should seriously review the legality of Trump’s arms sales to both countries, with a view to canceling them and banning future sales. Biden should commit to applying these laws consistently and uniformly to all U.S. military aid and arms sales, without making exceptions for Israel, Egypt or other U.S. allies.

After reneging on the JCPOA, Trump slapped draconian sanctions on Iran, brought us to the brink of war by killing its top general, and is even trying to order up illegal, aggressive war plans in his last days as president. The Biden administration will face an uphill battle undoing this web of hostile actions and the deep mistrust they have caused, so Biden must act decisively to restore mutual trust: immediately rejoin the JCPOA, lift the sanctions, and stop blocking the $5 billion IMF loan that Iran desperately needs to deal with the COVID crisis.

In the longer term, the U.S. should give up the idea of regime change in Iran--this is for the people of Iran to decide--and instead restore diplomatic relations and start working with Iran to deescalate other Middle East conflicts, from Lebanon to Syria to Afghanistan, where cooperation with Iran is essential.

4) End U.S. threats and sanctions against officials of the International Criminal Court (ICC).

Nothing so brazenly embodies the U.S. government’s enduring, bipartisan disdain for international law as its failure to ratify the Rome Statute of the International Criminal Court (ICC). If President Biden is serious about recommitting the U.S. to the rule of law, he should submit the Rome Statute to the U.S. Senate for ratification to join 120 other countries as members of the ICC. The Biden administration should also accept the jurisdiction of the International Court of Justice (ICJ), which the U.S. rejected after the Court convicted the U.S. of aggression and ordered it to pay reparations to Nicaragua in 1986.

5) Back President Moon’s diplomacy for a “permanent peace regime” in Korea.

President-elect Biden has reportedly agreed to meet South Korea’s President Moon Jae-in soon after he is sworn in. Trump’s failure to provide sanctions relief and explicit security guarantees to North Korea doomed his diplomacy and became an obstacle to the diplomatic process under way between Korean presidents Moon and Kim.

The Biden administration must start negotiating a peace agreement to formally end the Korean war, and initiate confidence-building measures such as opening liaison offices, easing sanctions, facilitating reunions between Korean-American and North Korean families and halting U.S.-South Korea military exercises. Negotiations must involve concrete commitments to non-aggression from the U.S. side to pave the way for a denuclearized Korean Peninsula and the reconciliation that so many Koreans desire--and deserve.

Biden can end Trump’s dangerous game of brinksmanship on Day One and commit to renewing Obama’s New START Treaty with Russia, which freezes both countries’ nuclear arsenals at 1,550 deployed warheads each. He can also freeze Obama and Trump’s plan to spend more than a trillion dollars on a new generation of U.S. nuclear weapons.

Biden should also adopt a long overdue "no first use" nuclear weapons policy, but most of the world is ready to go much further. In 2017, 122 countries voted for the Treaty on the Prohibition of Nuclear Weapons (TPNW) at the UN General Assembly. None of the current nuclear weapons states voted for or against the treaty, essentially pretending to ignore it. On October 24, 2020, Honduras became the 50th country to ratify the treaty, which will now go into effect on January 22, 2021.

U.S. sanctions on countries like Iran, Venezuela, Cuba, Nicaragua, North Korea and Syria are a form of economic warfare. UN special rapporteurs have condemned them as crimes against humanity and compared them to medieval sieges. Since most of these sanctions were imposed by executive order, President Biden can lift them the same way on Day One.

In the longer term, unilateral sanctions that affect an entire population are a form of coercion, like military intervention, coups and covert operations, that have no place in a legitimate foreign policy based on diplomacy, the rule of law and the peaceful resolution of disputes.

Over the past four years, the Trump administration overturned the progress towards normal relations made by President Obama, sanctioning Cuba’s tourism and energy industries, blocking coronavirus aid shipments, restricting remittances to family members and sabotaging Cuba’s international medical missions, which are a major source of income for its health system.

President Biden should start working with the Cuban government to allow the return of diplomats to their respective embassies, lift all restrictions on remittances, remove Cuba from the list of countries that are not U.S. partners against terrorism, cancel the portion of the Helms Burton Act (Title III) that allows Americans to sue companies that use property seized by the Cuban government 60 years ago, and collaborate with Cuban health professionals in the fight against COVID-19.

These measures would mark a down payment on a new era of diplomacy and cooperation, as long as they don’t fall victim to crass attempts to gain conservative Cuban-American votes in the next election, which Biden and politicians of both parties should commit to resisting.

In the fall of 2015, as U.S. forces escalated their bombing of ISIS targets in Iraq and Syria to over 100 bomb and missile strikes per day, the Obama administration loosened military rules of engagement to let U.S. commanders in the Middle East order airstrikes that were expected to kill up to 10 civilians without prior approval from Washington. Trump reportedly loosened the rules even further, but details were not made public. Iraqi Kurdish intelligence reports counted 40,000 civilians killed in the assault on Mosul alone. Biden can reset these rules and start killing fewer civilians on Day One.

But we can avoid these tragic civilian deaths altogether by ending these wars. Democrats have been critical of Trump’s often ad hoc pronouncements about withdrawing U.S. forces from Afghanistan, Syria, Iraq and Somalia. President Biden now has the chance to truly end these wars. He should set a date, no later than the end of December 2021, by when all U.S. troops will come home from all these combat zones. This policy may not be popular among war profiteers, but it would certainly be popular among Americans across the ideological spectrum.

10) Freeze U.S. military spending, and launch a major initiative to reduce it.

At the end of the Cold War, former senior Pentagon officials told the Senate Budget Committee that U.S. military spending could safely be cut by half over the next ten years. That goal was never achieved, and the promised peace dividend gave way to a triumphalist “power dividend.”

The military-industrial complex exploited the crimes of September 11th to justify an extraordinary one-sided arms race in which the U.S. accounted for 45% of global military spending from 2003 to 2011, far outstripping its peak Cold War military spending. The military-industrial complex is counting on Biden to escalate a renewed Cold War with Russia and China as the only plausible pretext for continuing these record military budgets.

Biden must dial back the conflicts with China and Russia, and instead begin the critical task of moving money from the Pentagon to urgent domestic needs. He should start with the 10 percent cut supported this year by 93 representatives and 23 senators.

In the longer term, Biden should look for deeper cuts in Pentagon spending, as in Representative Barbara Lee's bill to cut $350 billion per year from the U.S. military budget, approximating the 50% peace dividend we were promised after the Cold War and freeing up resources we sorely need to invest in healthcare, education, clean energy and modern infrastructure.

Medea Benjamin is the cofounder of CODEPINK for Peace, and the author of several books, including Kingdom of the Unjust: Behind the US-Saudi Connection and Inside Iran: the Real History and Politics of the Islamic Republic of Iran.

Nicolas J. S. Davies is an independent journalist, a researcher with CODEPINK, and the author of Blood On Our Hands: the American Invasion and Destruction of Iraq.