U.S. Sanctions: Economic Sabotage that is Deadly, Illegal and Ineffective 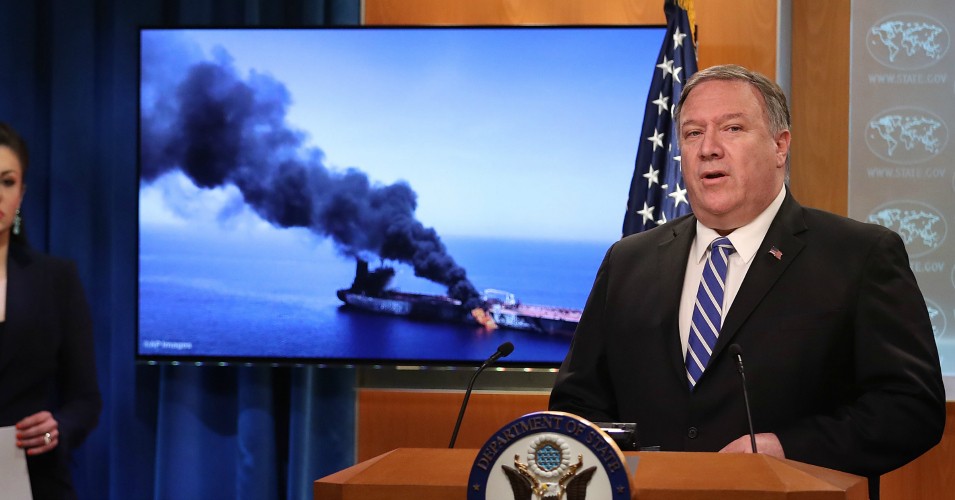 While the mystery of who is responsible for sabotaging the two tankers in the Gulf of Oman remains unsolved, it is clear that the Trump administration has been sabotaging Iranian oil shipments since May 2, when it announced its intention to “bring Iran’s oil exports to zero, denying the regime its principal source of revenue.” The move was aimed at China, India, Japan, South Korea and Turkey, all nations that purchase Iranian oil and now face U.S. threats if they continue to do so. The U.S. military might not have physically blown up tankers carrying Iranian crude, but its actions have the same effect and should be considered acts of economic terrorism.

The Trump administration is also committing a massive oil heist by seizing $7 billion in Venezuela’s oil assets--keeping the Maduro government from getting access to its own money. According to John Bolton, the sanctions on Venezuela will affect $11 billion worth of oil exports in 2019. The Trump administration also threatens shipping companies that carry Venezuelan oil. Two companies--one based in Liberia and the other in Greece--have already been slapped with penalties for shipping Venezuelan oil to Cuba. No gaping holes in their ships, but economic sabotage nonetheless.

Whether in Iran, Venezuela, Cuba, North Korea or one of the 20 countries under the boot of U.S. sanctions, the Trump administration is using its economic weight to try to exact regime change or major policy changes in countries around the globe.

The U.S. sanctions against Iran are particularly brutal. While they have utterly failed to advance U.S. regime change goals, they have provoked growing tensions with U.S. trading partners across the world and inflicted terrible pain on the ordinary people of Iran.  Although food and medicines are technically exempt from sanctions, U.S. sanctions against Iranian banks like Parsian Bank, Iran’s largest non-state-owned bank, make it nearly impossible to process payments for imported goods, and that includes food and medicine. The resulting shortage of medicines is sure to cause thousands of preventable deaths in Iran, and the victims will be ordinary working people, not Ayatollahs or government ministers.

U.S. corporate media have been complicit in the pretense that U.S. sanctions are a non-violent tool to inflict pressure on targeted governments in order to force some kind of democratic regime change. U.S. reports rarely mention their deadly impact on ordinary people, instead blaming the resulting economic crises solely on the governments being targeted.

The deadly impact of sanctions is all too clear in Venezuela, where crippling economic sanctions have decimated an economy already reeling from the drop in oil prices, opposition sabotage, corruption and bad government policies. A joint annual report on mortality in Venezuela in 2018 by three Venezuelan universities found that U.S. sanctions were largely responsible for at least 40,000 additional deaths that year.  The Venezuela Pharmaceutical Association reported an 85% shortage of essential medicines in 2018.

Absent U.S. sanctions, the rebound in global oil prices in 2018 should have led to at least a small rebound in Venezuela’s economy and more adequate imports of food and medicine. Instead, U.S. financial sanctions prevented Venezuela from rolling over its debts and deprived the oil industry of cash for parts, repairs and new investment, leading to an even more dramatic fall in oil production than in the previous years of low oil prices and economic depression. The oil industry provides 95% of Venezuela’s foreign earnings, so by strangling its oil industry and cutting Venezuela off from international borrowing, the sanctions have predictably - and intentionally - trapped the people of Venezuela in a deadly economic downward spiral.

A study by Jeffrey Sachs and Mark Weisbrot for the Center for Economic and Policy Research, titled “Sanctions as Collective Punishment: the Case of Venezuela,” reported that the combined effect of the 2017 and 2019 U.S. sanctions are projected to lead to an astounding 37.4% decline in Venezuela’s real GDP in 2019, on the heels of a 16.7% decline in 2018 and the over 60% drop in oil prices between 2012 and 2016.

In North Korea, many decades of sanctions, coupled with extended periods of drought, have left millions of the nation’s 25 million people malnourished and impoverished. Rural areas in particular lack medicine and clean water. Even more stringent sanctions imposed in 2018 banned most of the country’s exports, reducing the government’s ability to pay for imported food to alleviate the shortages.

One of the most egregious elements of U.S. sanctions is their extraterritorial reach. The U.S. slaps third-country businesses with penalties for “violating” U.S. sanctions. When the U.S. unilaterally left the nuclear deal and imposed sanctions, the U.S. Treasury Department bragged that in just one day, November 5, 2018, it sanctioned more than 700 individuals, entities, aircraft, and vessels doing business with Iran. Regarding Venezuela, Reuters reported that in March 2019 the State Department had “instructed oil trading houses and refiners around the world to further cut dealings with Venezuela or face sanctions themselves, even if the trades made are not prohibited by published U.S. sanctions.”

An oil industry source complained to Reuters, “This is how the United States operates these days. They have written rules, and then they call you to explain that there are also unwritten rules that they want you to follow.”

U.S. officials say that sanctions will benefit the people of Venezuela and Iran by pushing them to rise up and overthrow their governments. Since the use of military force, coups and covert operations to overthrow foreign governments have proven catastrophic in Afghanistan, Iraq, Haiti, Somalia, Honduras, Libya, Syria, Ukraine and Yemen, the idea of using the dominant position of the U.S. and the dollar in international financial markets as a form of “soft power” to achieve “regime change” may strike U.S. policymakers as an easier form of coercion to sell to a war-weary U.S. public and uneasy allies.

But shifting from the “shock and awe” of aerial bombardment and military occupation to the silent killers of preventable diseases, malnutrition and extreme poverty is far from a humanitarian option, and no more legitimate than the use of military force under international humanitarian law.

Denis Halliday was a UN Assistant Secretary-General who served as Humanitarian Coordinator in Iraq and resigned from the UN in protest at the brutal sanctions on Iraq in 1998.

"Comprehensive sanctions, when imposed by the UN Security Council or by a State on a sovereign country, are a form of warfare, a blunt weapon that inevitably punishes innocent citizens,” Denis Halliday told us. “If they are deliberately extended when their deadly consequences are known, sanctions can be deemed genocide. When U.S. Ambassador Madeleine Albright said on CBS ‘Sixty Minutes’ in 1996 that killing 500,000 Iraqi children to try to bring down Saddam Hussein was ‘worth it,’ the continuation of UN sanctions against Iraq met the definition of genocide.”

Today, two UN Special Rapporteurs appointed by the UN Human Rights Council are serious independent authorities on the impact and illegality of U.S. sanctions on Venezuela, and their general conclusions apply equally to Iran. Alfred De Zayas visited Venezuela soon after the imposition of U.S. financial sanctions in 2017 and wrote an extensive report on what he found there.  He found significant impacts due to Venezuela’s long-term dependence on oil, poor governance and corruption, but he also strongly condemned U.S. sanctions and “economic warfare.”

"Modern-day economic sanctions and blockades are comparable with medieval sieges of towns," De Zayas wrote. "Twenty-first century sanctions attempt to bring not just a town, but sovereign countries to their knees."  De Zayas’s report recommended that the International Criminal Court should investigate U.S. sanctions against Venezuela as a crime against humanity.

A second UN Special Rapporteur, Idriss Jazairy, issued a forceful statement in response to the failed U.S-backed coup in Venezuela in January.  He condemned “coercion” by outside powers as a “violation of all norms of international law.”  “Sanctions which can lead to starvation and medical shortages are not the answer to the crisis in Venezuela,” Jazairy said, “...precipitating an economic and humanitarian crisis…is not a foundation for the peaceful settlement of disputes.”

Sanctions also violate Article 19 of the Charter of the Organization of American States, which explicitly prohibits intervention “for any reason whatever, in the internal or external affairs of any other State.”  It adds that it “prohibits not only armed force but also any other form of interference or attempted threat against the personality of the State or against its political, economic, and cultural elements.”

Article 20 of the OAS Charter is equally pertinent: “No State may use or encourage the use of coercive measures of an economic or political character in order to force the sovereign will of another State and obtain from it advantages of any kind.”

In terms of U.S. law, both the 2017 and 2019 sanctions on Venezuela are based on unsubstantiated presidential declarations that the situation in Venezuela has created a so-called "national emergency" in the United States. If U.S. federal courts were not so afraid to hold the executive branch accountable on matters of foreign policy, this could be challenged and very likely dismissed by a federal court even more quickly and easily than the similar case of a "national emergency" on the Mexican border, which is at least geographically connected to the United States.

There is one more critical reason for sparing the people of Iran, Venezuela and other targeted countries from the deadly and illegal impacts of U.S. economic sanctions: they don’t work.

Twenty years ago, as economic sanctions slashed Iraq’s GDP by 48% over 5 years and serious studies documented their genocidal human cost, they still failed to remove the government of Saddam Hussein from power. Two UN Assistant Secretaries General, Denis Halliday and Hans Von Sponeck, resigned in protest from senior positions at the UN rather than enforce these murderous sanctions.

In 1997, Robert Pape, then a professor at Dartmouth College, tried to resolve the most basic questions about the use of economic sanctions to achieve political change in other countries by collecting and analyzing the historical data on 115 cases where this was tried between 1914 and 1990.  In his study, titled “Why Economic Sanctions Do Not Work,” he concluded that sanctions had only been successful in 5 out of 115 cases.

Pape also posed an important and provocative question: “If economic sanctions are rarely effective, why do states keep using them?”

We think that the answer is probably a combination of “all of the above.”  But we firmly believe that no combination of these or any other rationale can ever justify the genocidal human cost of economic sanctions in Iraq, North Korea, Iran, Venezuela or anywhere else.

While the world condemns the recent attacks on the oil tankers and tries to identify the culprit, global condemnation should also focus on the country responsible for the deadly, illegal and ineffective economic warfare at the heart of this crisis: the United States.

Nicolas J. S. Davies is a writer for Consortium News and a researcher with CODEPINK, and the author of Blood On Our Hands: the American Invasion and Destruction of Iraq.