CODEPINK, Veterans for Peace and Ban Killer Drones activists occupied Beale AFB in Marysville, CA via a nonviolent blockade during the morning commute on October 26th. Beale Air Force Base is home to the Global Hawk Drone which surveils, targets and assists with U.S. Killer Drone Program.

We had a very successful day. The evening before, Susan, Sharat and I prepared, painted and cut the life-sized cardboard figures representing the victims of the Ahmadi Family U.S. drone massacre that took place in Kabul on August 29, 2021. To all of us, it felt like a ritualistic activity, honoring their sacred lives. A quiet and mournful tone carried into the next day’s action at Beale Drone Base.  Just holding one of those little cardboard “children”, with their name and age labeled, brought an inner sadness. Lives lost at such young ages due to the unnecessary and completely reckless practices of the covert U.S. drone program. INEXCUSABLE! 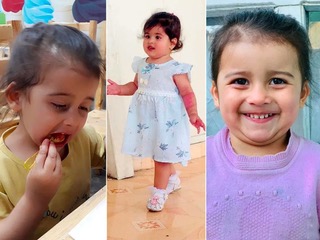 Arriving in the dark of the morning to “greet” the early base commuters, we brought out the most visible banners first.  When daylight broke, we began to display the cardboard Ahmadi figures.  Though we only had 5 people to display 10 figures and a couple of banners, VFP friend, Michael Kerr, solved the problem by bringing “A-frame” stands to help. THANKS MICHAEL! 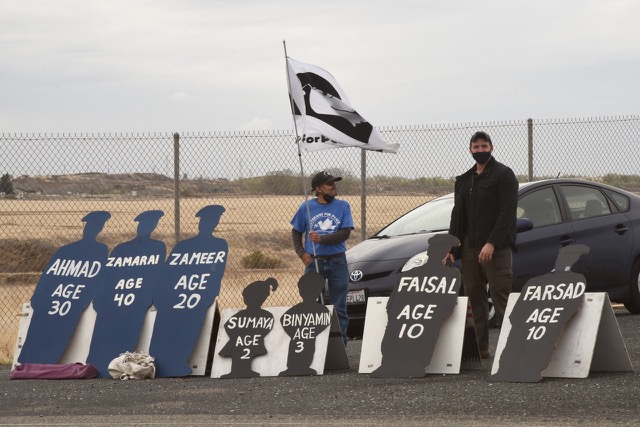 Soon after daybreak we walked down the road that leads to the gate to have a peaceful blockade! (2 min video). Fred Bialy walked along the line of cars, handing out the Open Letter to Col. Heather Cox, the base commander. A few accepted; Fred then carried one of the small Ahmadi figures representing a young child victim in his arms along the line of blocked cars, hoping to awaken some hearts.

Traffic was stalled for about 30 min., and then we agreed to let some of the traffic thru, so they could read our banners, and “witness” the memorial for the Ahmadi victims lined up in silhouette along the roadway. We then returned to blocking the road (20 sec. video) for about another 15 min. or so.  By that time the military police assisted our blockade by closing the barbed wire topped gates for us! Significant Shut Down: A Victory! We then crossed the white boundary line onto the base, and walked with a banner and some of the Ahmadi child figures to the now closed gate. By that time the editor/reporter from Marysville Appeal Democrat arrived to cover the event. We read our press statement to the military security and the media simultaneously, which included a list of our Ban Killer Drones demands seeking reparations (minimal $3 million per victim) for the Ahmadi family. Thanks to Eleanor Levine for composing the statement: Press Conference Statement

Ultimately, through the closed gate, the military read the “riot act,” threatening arrest if we didn’t leave base property. Toby completed reading the statement through the megaphone, while slowly walking backwards, to join the others already across the base property line.Before leaving our am vigil/blockade, Toby remembered that the open letter to Col. Heather Cox hadn’t been delivered to Beale personnel to give to the Beale Commander. Toby went back on base property, walked up to the closed gate and handed the letter to a uniformed man who claimed to be “in charge”.  There were no arrests and, more importantly, we were told the letter would be delivered to the commander. Before leaving, Toby asked the other 6-7 military personnel present on the other side of the fenced gate if they would like to have a copy of the letter to read. Surprisingly, a young black woman in uniform had the courage, in front of her peers to accept the letter. And that does take courage, especially being young, black and female, in such an oppressive, undemocratic and authoritative environment!

The location/gate of our pm action wasn’t made public. Last month, when our vigil WAS advertised at the Doolittle gate, exiting traffic was already being diverted to another gate before we arrived, and we had to drive to the Schneider gate, which itself had very low traffic. I don’t think they like us there. This time, curiously, at about 1:00PM we got a long string of crazy and very suspicious phone calls that we figured were most likely Beale security personnel trying to “prepare” for us. When we asked questions to assess the “validity” of each call, the answers were so bizarre, we decided not to reveal our afternoon plans and location. 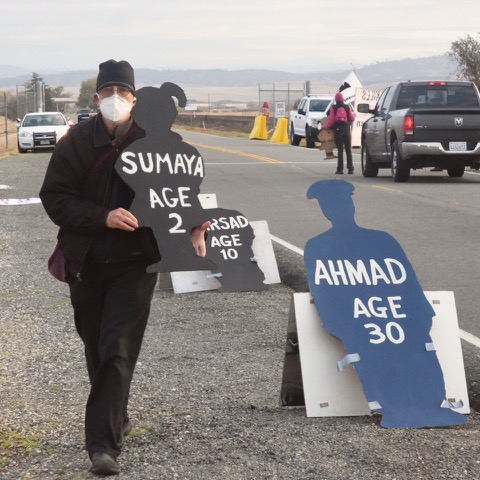 This time, when we arrived at the Doolittle gate we were pleased to find a steady flow of traffic that continued throughout our vigil. Michael and Fred did a great job setting up the impactful visuals (see photo above), and Sharat & Susan stood closer to the traffic coming out of the base with a banner and 2 Ahmadi child figures. 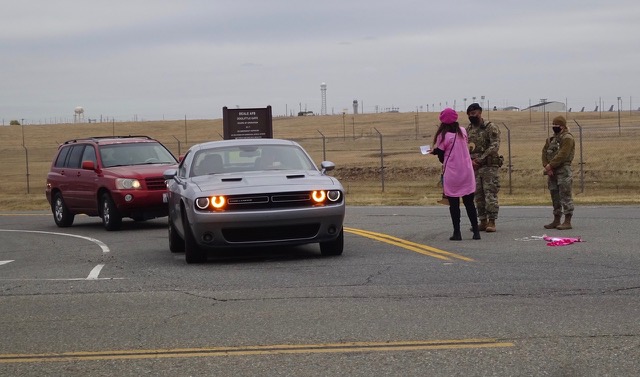 Toby stood in the un-raised “divider” or “gore,” near the stop sign, close to where military folks pull out onto the highway to return home. While holding “Malika, Age 3,”  Toby spent most of the vigil offering the leaflets (pictured above) to drivers waiting to merge onto the highway. Two military security personnel hovered near Toby much of the time, making attempts to dissuade her from standing at the prime advantageous spot for leafletting. Surprisingly, many of the uniformed personnel seemed, nonetheless, eager to get a flyer. There appeared to be a “sea change” from past vigils, possibly showing signs of a small but hopeful change in group mentality. With persistence, Toby was able to get about 15 leaflets passed out. Eventually a CHP officer arrived, made repeated attempts to order Toby away from her prime spot, and eventually threatening to write a citation. There continues to be great inconsistency by CHP officers in terms of responses to “free speech” rights in the gore.

Military drones should NEVER have been developed, they make the world less safe for everyone, and since our government won’t listen to its citizens with a conscience, the only meaningful tool of resistance left for us is to seek justice via BLOCKADING!

Lots of effort was made to engage with military and law enforcement in many different ways, including through informal conversation when able, and we do feel like it is paying off… moving toward the change we want to see in the world.

Let Us Not Forget the Ahmadi Family!

WE WILL BE BACK!