Hillary Clinton, the Podesta Group and the Saudi Regime: A Fatal Menage a Trois 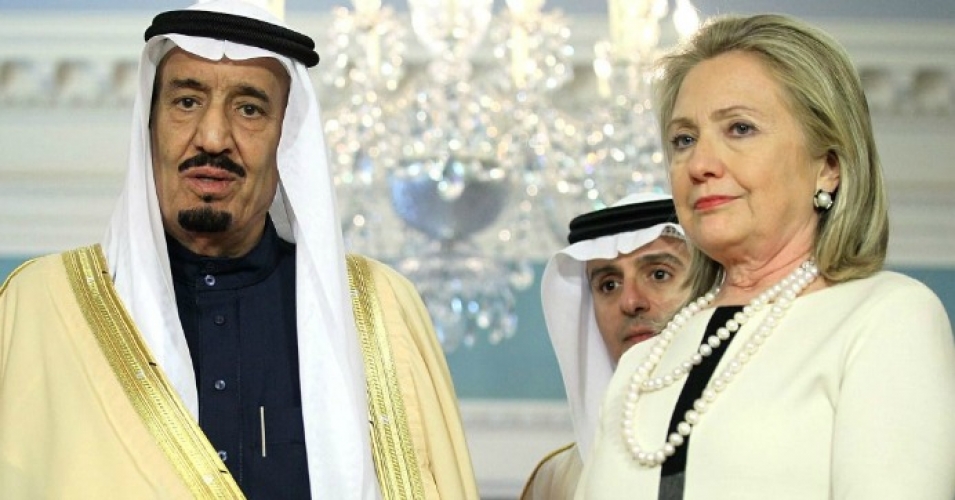 If I told you that Democratic Party lobbyist Tony Podesta, whose brother John Podesta chairs Hillary Clinton’s presidential campaign, is a registered foreign agent on the  Saudi government’s payroll, you’d probably think I was a Trump-thumping, conspiratorial nutcase. But it’s true.

The lobby firm created by both Tony and John Podesta in 1988 receives $140,000 a month from the Saudi government, a government that beheads nonviolent dissidents, uses torture to extract forced confessions, doesn’t allow women to drive, and bombs schools, hospitals and residential neighborhoods in neighboring Yemen.

The Podesta Group’s March 2016 filing, required under the Foreign Agents Registration Act of 1938, shows that Tony Podesta himself oversees the Saudi account. At the same time, Tony Podesta is also a top campaign contributor and bundler for Hillary Clinton. So while one brother runs the campaign, the other brother funds it with earnings that come, in part, from the Saudis.

John and Tony Podesta have been heavyweights in DC insider politics for decades. John Podesta served as President Bill Clinton’s chief of staff, founded the influential DC think tank Center for American Progress (which regularly touts Saudi “reforms”), and was counselor to President Obama. Tony Podesta was dubbed by The New York Times as “one of Washington’s biggest players” whose clients “are going to get a blueprint for how to succeed in official Washington.”

The brothers seem to have no problem mixing their roles into the same pot. Tony Podesta held a Clinton campaign fundraiser at his home featuring gourmet Italian food cooked by himself and his brother, the campaign chairman. The fundraiser, by the way, came just days after Tony Podesta filed his Saudi contract with the Justice Department, a contract that included an initial “project fee” payment of $200,000.

The Saudis hired the Podesta Group in 2015 because it was getting hammered in the press over civilian casualties from its airstrikes in Yemen and its crackdown on political dissidents at home, including sentencing blogger Raif Badawi to ten years in prison and 1,000 lashes for “insulting Islam.” Since then, Tony Podesta’s fingerprints have been all over Saudi Arabia’s advocacy efforts in Washington DC. When Saudi Arabia executed the prominent nonviolent Shia dissident Sheikh Nimr al-Nimr, causing protests throughout the Shia world and inflaming sectarian divisions, The New York Times noted that the Podesta Group provided the newspaper with a Saudi commentator who defended the execution.

The Podesta-Clinton-Saudi connection should be seen in light of the recent media exposes revealing the taudry pay-to-play nature of the Clinton Foundation. Top on the list of foreign donors to the foundation is Saudi Arabia, which contributed between $10 million and $25 million.

What did the Saudis get for their largesse and access? Wikileaks revealed a 2009 cable by then Secretary of State Hillary Clinton saying: "More needs to be done since Saudi Arabia remains a critical financial support base for Al Qaeda, the Taliban, Lashkar e-Tayyiba and other terrorist groups." Instead of sanctioning the Saudis, Clinton did the opposite: She authorized enormous quantities of weapons to be sold to them. On Christmas Eve in 2011, Hillary Clinton and her closest aides celebrated a massive $29.4 billion sale to the Saudis of over 80 F-15 fighter jets, manufactured by Boeing, a company which coincidentally contributed $900,000 to the Clinton Foundation. In a chain of enthusiastic emails, an aide exclaimed that it was “not a bad Christmas present.” I’m sure the Yemenis at the receiving end of the Saudi bombings would not be so enthusiastic.

The Clintons have said that if Hillary Clinton gets elected, the foundation will stop taking foreign donations. But what about no longer taking campaign contributions from people who are paid by the Saudi government to whitewash its image? The Podesta Group should be blacklisted from contributing to Clinton’s campaign until they drop the monarchy as a client and return their ill-gotten gains. If Hillary Clinton wants to be a meaningful symbol for human rights and women’s empowerment, her campaign must live up to the values she claims to represent, and this would be one step in the right direction.

Medea Benjamin is the co-founder of the women-led peace group CODEPINK.