As the forces of oppression are ramping up their attacks, we are increasing our resistance and bringing it to the streets. Throughout March, April, and May we are working day and night to create the world we want. From challenging Trump’s war budget, to supporting Palestinian human rights, to demanding an end to U.S. backed Saudi bombing’s of Yemen, we won’t stop until justice and freedom is achieved. Here’s what we will be involved in and how you can join us:

It was a sad week for human rights as David Friedman was confirmed yesterday to be US ambassador to Israel. However, all our hard work to oppose Friedman paid off as the confirmation came down along party lines with only 2 democrats voting for him. Now we have a chance to double our efforts this weekend.

The first day of AIPAC is also the next court date for Palestinian human rights defender Issa Amro, who is facing 18 charges in Israeli military court for his nonviolent activism to end Israeli apartheid and occupation.

Sign the petition that Issa Amro should be free! 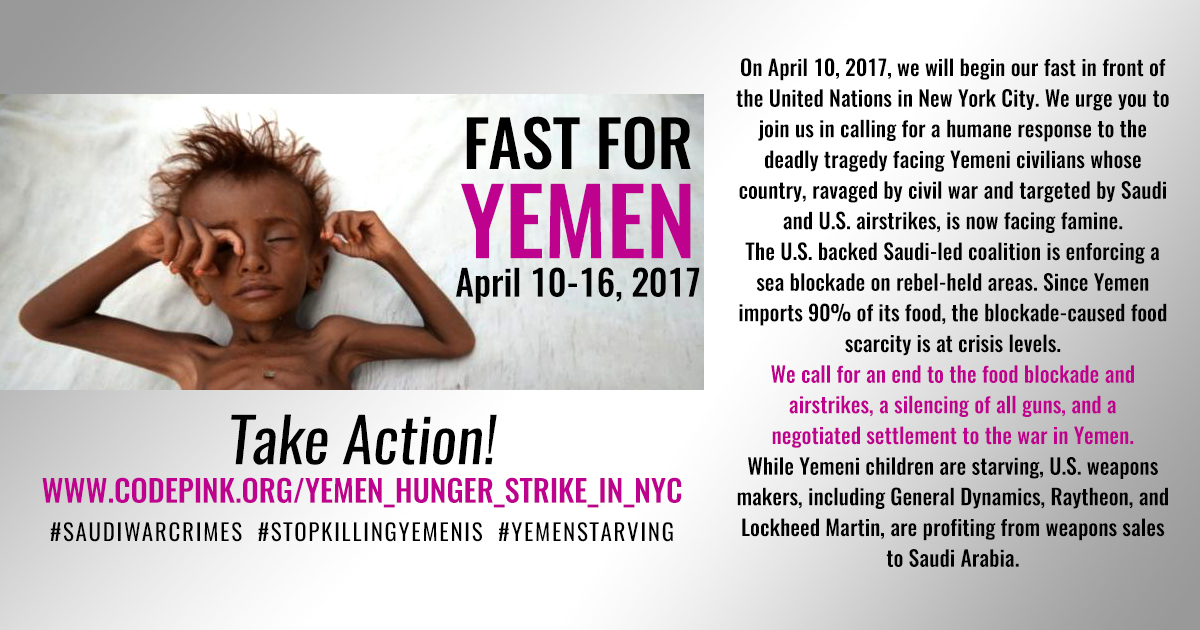 U.S.- backed Saudi strikes on Yemen have caused tens of thousands of deaths and a humanitarian crisis. Two-thirds of the population require food assistance and every ten minutes a Yemeni child dies from hunger and lack of medical facilities.

Tell President Trump not to approve another $390 million in arms sales to Saudi Arabia!

On April 10 a group of dedicated activists will begin a week-long fast in solidarity with the people of Yemen and hold a vigil at the Isaiah Wall across from the United Nations. On April 13, we will join their fast for the day.

Sign up to fast on April 13 in solidarity with the people of Yemen! 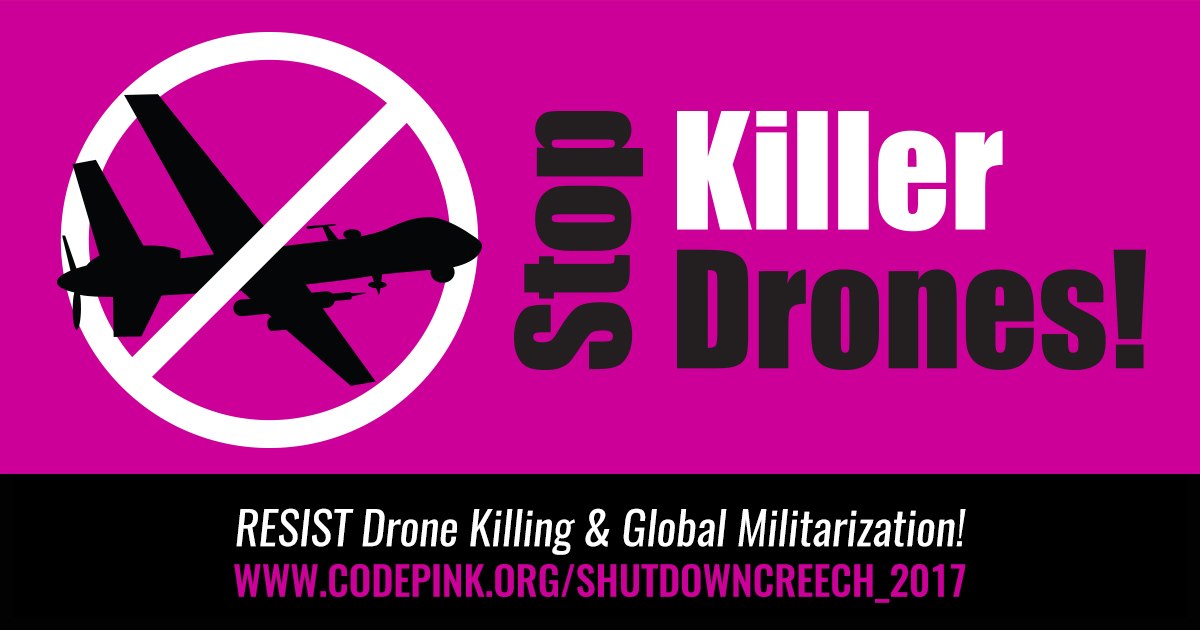 Sign up to join us in to shut down Creech!

To pay for his $54 billion for war, Trump wants to slash the EPA by 30%! Our children need clean air to breathe and safe water to drink not more tanks and warships.

Say No to Trump’s $54 billion for war and join us in Washington D.C. April 29 for the People's Climate March! 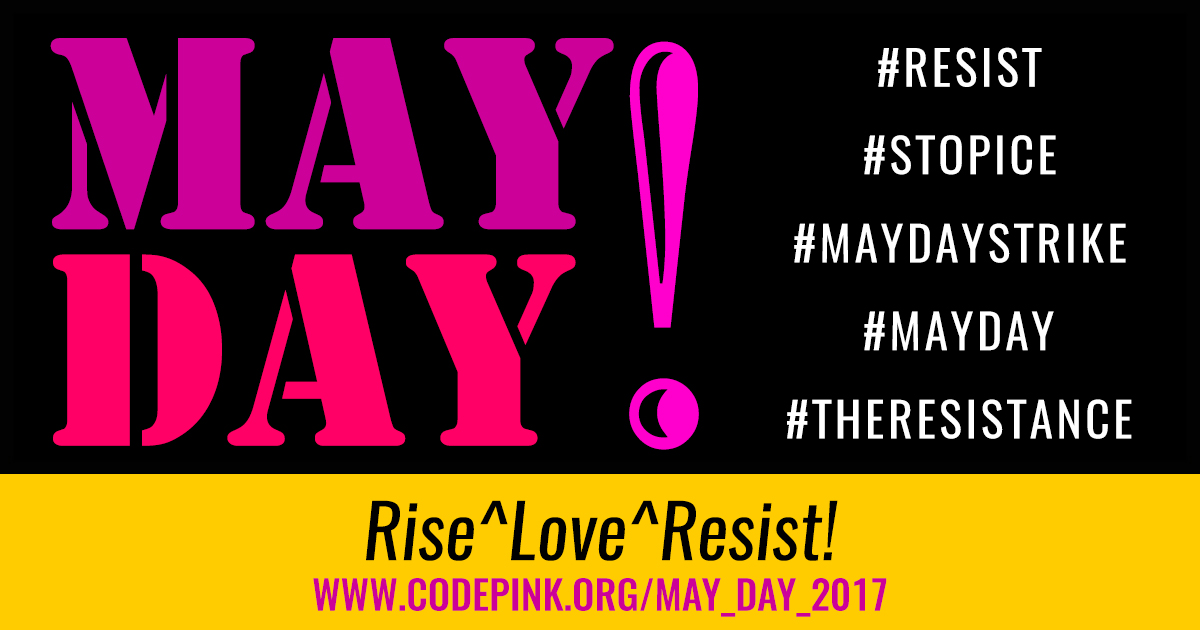 May Day Strike for Peace, May 1

Trump said he would be putting America to work. But he is only working for the same old corporate interests that beat the drums of war and line the pockets of the 1%!

This May Day take a stand by staying home from work and taking to the streets! We will supply you with details about what is going on in your area and materials for your use. 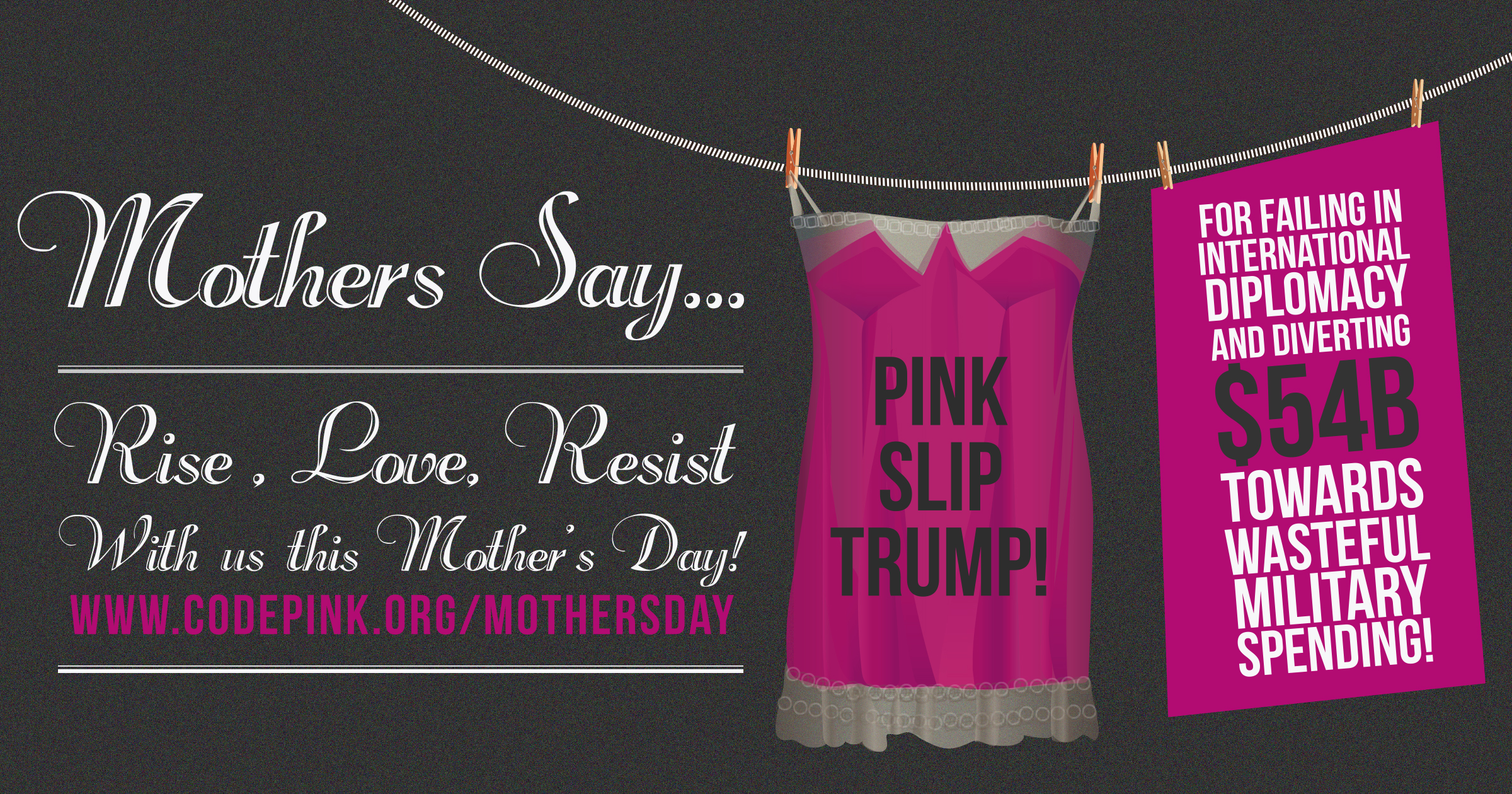 In 1872 Julia Ward Howe sounded the call to DISARM, DISARM and declared the first "Mother's Day for Peace.” This year, we will heed Julia’s call and bring together our mothers, daughters, aunts, children, and all who want to work for an end to racism, Islamophobia, transphobia, misogyny, militarism, violence, war, and other forms of hate.

Join us in Washington D.C. for a direct action on Friday, May 12 and then a Mother’s Day Peace Vigil in front of the White House on Saturday, May 13!

As Trump took office, we pledged to rise, love, and resist with all of our strength. Over the last couple months, we have seen the hate and racism go into overdrive. But we have also seen a massive rise in the resistance movement. Together we can stand against walls and bans to bring about a world filled with peace and justice.

P.S. We are all in this together. Check out our toolkit of resistance. Our work for a peaceful world is needed now more than ever. Listen to a description of recent US airstrikes on Iraq, Syria, and Yemen.