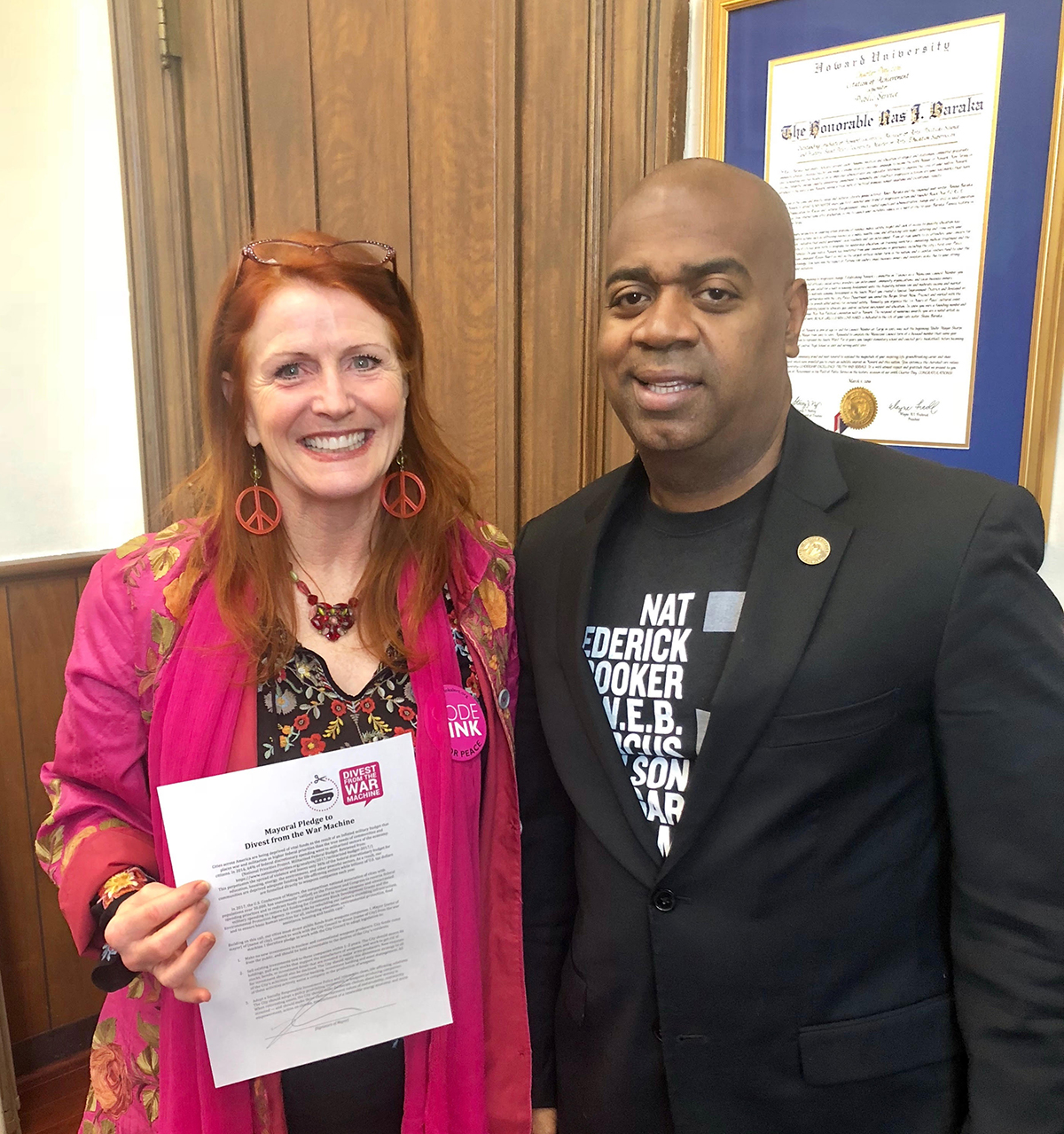 Your Divest from the War Machine coalition is working hard and picking up steam. The pressure is growing on Congresspersons to divest from war! Now we’re asking our mayors to divest from war. We created a pledge specifically for mayors to show us their willingness to work on divesting their cities and towns from the war machine. But first, we need to get the word out... Ras J. Baraka, the mayor of Newark, New Jersey, signed the pledge and agreed to lead other U.S. mayors!

Fill out this form if you want to help get your mayor working for peace. 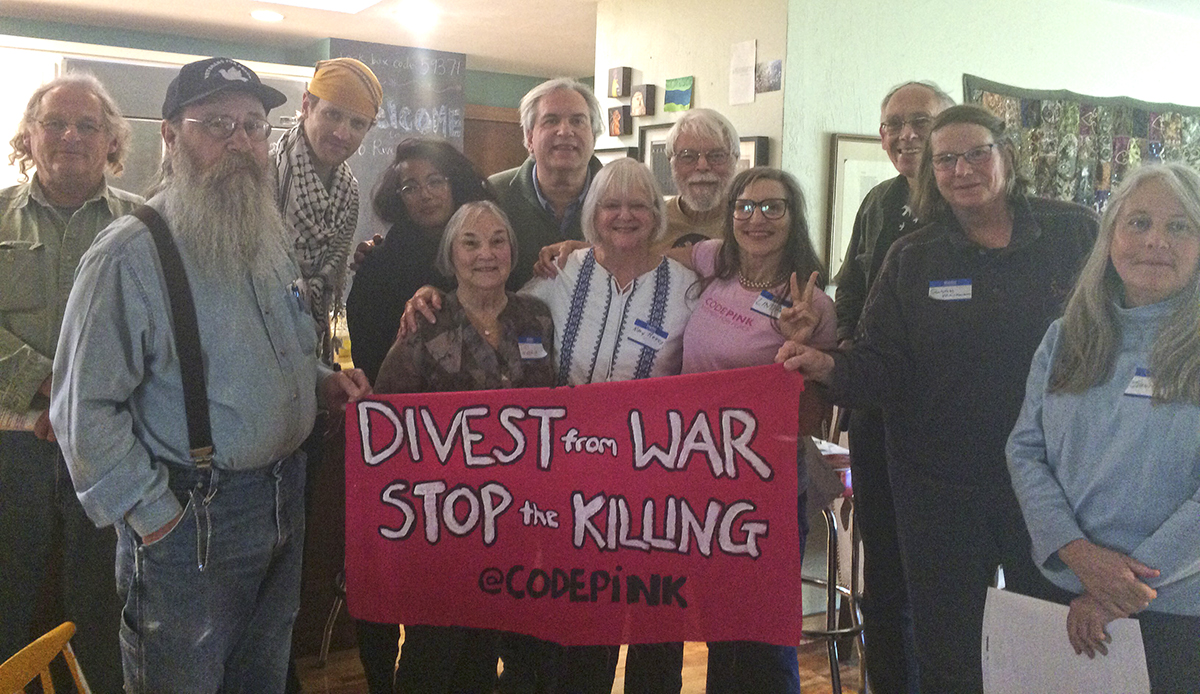 Berkeley you make us proud: Last Tuesday, the Berkeley divest from war coalition convinced their city council to divest from war! The resolution barring the city from investing in weapons makers passed the council, making Berkeley the third city to divest from war, following Santa Monica and West Hollywood. Who’s next? Learn more about how to divest your city here,  then let us know you’re ready to help by emailing us at divest@codepink.org.

Now other cities around the country are gearing up to divest from war. The Seattle divest from war coalition is organizing their kickoff meeting shortly — I’ll send a save the date with details soon. Meanwhile, in Philadelphia, the coalition recently met for the first time and developed a work plan to get started. The Oregon coalition to divest the Public Employee Retirement System (PERS) from war held its first meeting last week. Smaller teams are forming across the state and are getting to work on PERS and other exciting divest projects. Let me know if you live in Seattle, Philadelphia, or Oregon and I’ll get you plugged into a project! You can reach me at maya@codepink.org.

We’ve heard from many that you want to help us divest your Congressperson from war! If you haven’t signed up yet fill out this form to join the project. Our Northampton, MA, crew just convinced Rep. Jim McGovern to sign the pledge he’ll take no money from weapons, fossil fuels, or corporate PACs! 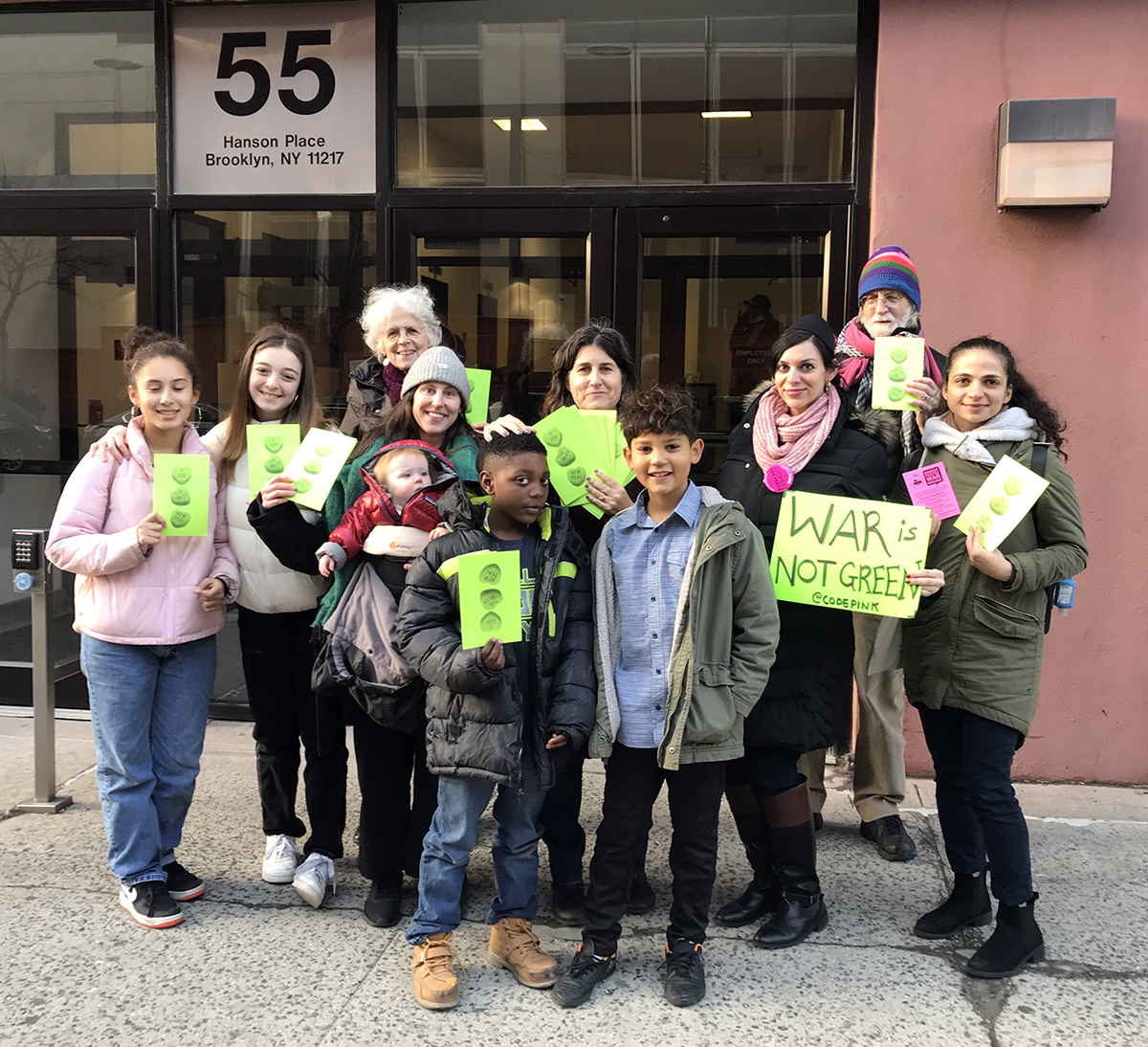 On the East Coast we’ve been busy divesting the largest city in the U.S. from war! We held a powerful Wall Street Die-In at the Museum of American Finance gala where war profiteer — BlackRock CEO Larry Fink — was shamefully honored. We delivered a petition to VICE headquarters demanding that they cut their contract with Saudi Media Research group. On Valentine’s Day, we joined the #BackersofHate protest against JP Morgan Chase’s practice of funding of private prisons. Four generations of constituents delivered Green New Deal V-Day cards to Rep. Hakeem Jeffries’ office, because War is Not Green! The City University of New York “Divest from Death” campaign is moving forward, with the International Committee of the Professional Staff Congress supporting the campaign and advancing it to their executive committee. Our local “Move the Money” campaign will launch on February 28th to introduce a City Council resolution calling on the federal government and its legislators to move funds out of the military budget into funding human needs and services. Learn more about how you can get involved by emailing our local organizer Sarah at sarah.manasrah@codepink.org!

Students at Cal Poly San Luis Obispo took their Raytheon protests to the next level at the school’s most recent career fair. This was their third protest of the insidious relationship between Cal Poly and weapons makers like Raytheon and the first they held outside the fair where all community members were welcome to gather. Their protests have even inspired actions on campuses in Massachusetts! The Cal Poly group organizes under the name SLO (San Luis Obispo) Peace Coalition and they’ve begun open meetings to build their divest from war campaign. Contact Carley for more information at: carley@codepink.org. 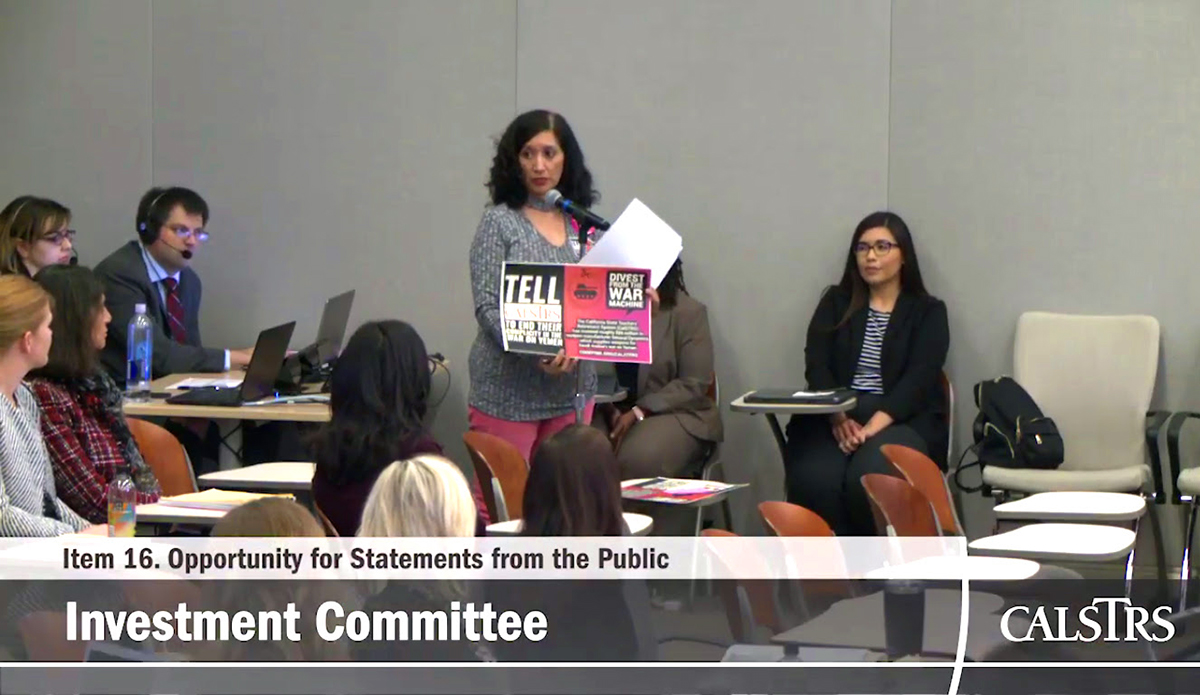 On January 30th, retired public school teacher Jef Schultz and CODEPINK organizer Nancy Mancias addressed the California State Teachers' Retirement System (CalSTRS) investment committee and staff in West Sacramento, California. Schultz expressed concern that the pension fund is making millions by investing in General Dynamics, a company responsible for killing innocent civilians around the world- including children. After the meeting, the chair of the investment committee, Harry Keiley, identified four CalSTRS staff members for us to engage with on divestment. This is an important next step in our campaign! In order to engage with CalSTRS members directly, we launched a newsletter to keep them up to date on all of the latest developments. Watch Nancy and Jef speak at the CalSTRS Board Meeting. 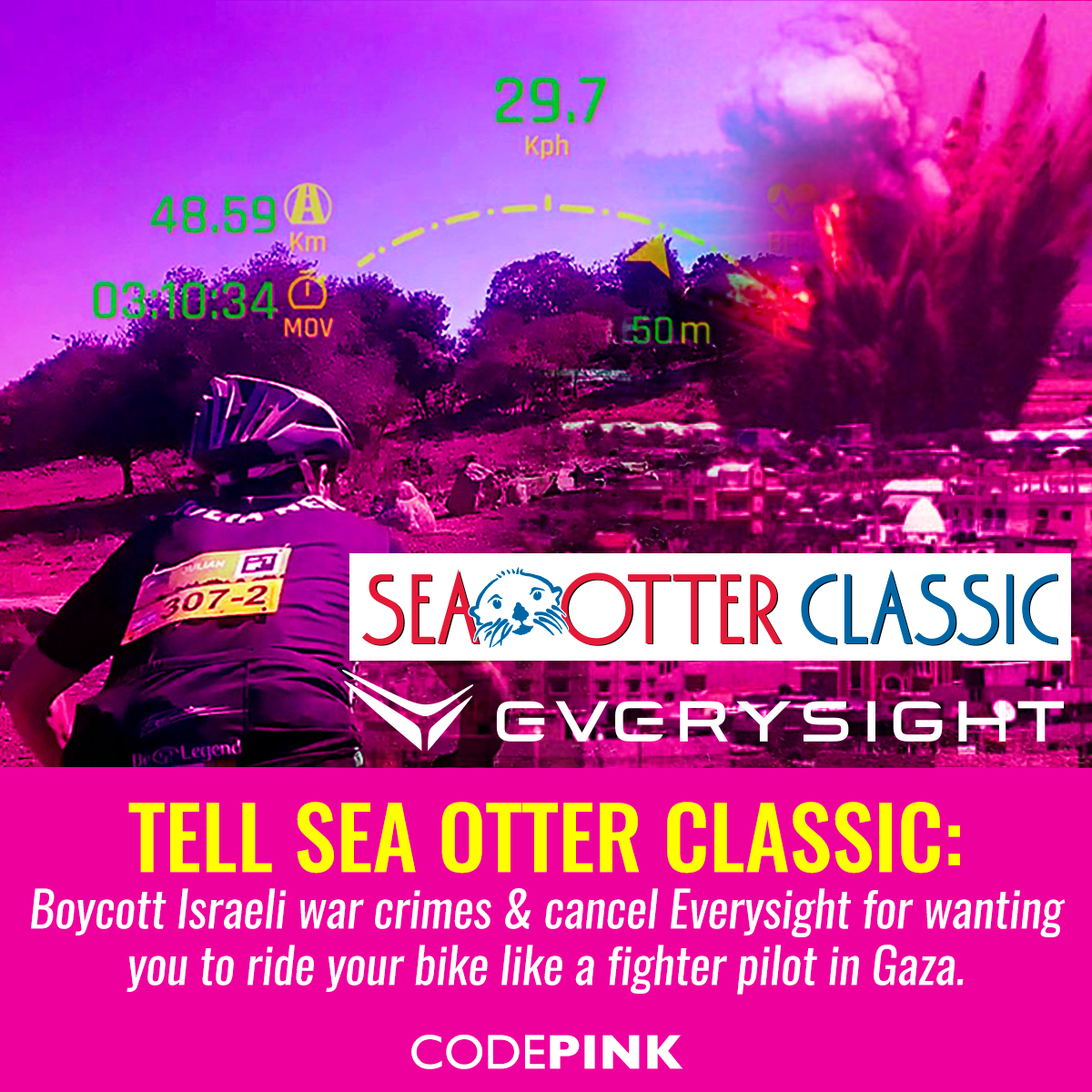 As Congress and Trump fight over how many millions to dedicate to border militarization, Elbit Systems, Israel’s largest weapons company, is first in line to secure lucrative border surveillance contracts. In February, we continued to ask Congress members to reject campaign contributions from Elbit Systems and to vote against funding for any border militarization. CODEPINK is putting extra pressure on Democrats to do the right thing and calling on Senator Jeanne Shaheen and Rep. Annie Kuster in New Hampshire, Rep. Sharice Davids in Kansas, and Rep. Ann Kirkpatrick in Arizona to reject campaign contributions from Elbit. To learn more about who has received campaign donations from Elbit, visit www.codepink.org/stopelbit.

The Everysight Raptor is Elbit Systems’ first consumer product — “augmented reality” glasses that allow cyclists to “ride like a fighter pilot.” Raptor’s technology has been brutally tested on Palestinians under siege by Israel in Gaza. In February, CODEPINK learned that one of the highest profile cycling events in the US, the Hincapie Gran Fondo canceled Everysight’s sponsorship. Thank you to the CODEPINK activists around the country that took action by protesting at Hincapie events and contacting Hincapie Sports to cancel the Raptor! With Spring around the corner, the Boycott Everysight campaign is ramping up and we are calling on the Sea Otter Classic, the United States’ largest cycling expo to cancel Everysight’s participation. To learn more and to get involved, contact ursula@codepink.org and please circulate the petition.

Toward a weapons free world,
Maya and the CODEPINK Divest from War team

P.S. Fill out our volunteer sign up form to get started with us!

💰Millions in US military aid are used...

We are writing to you today with...