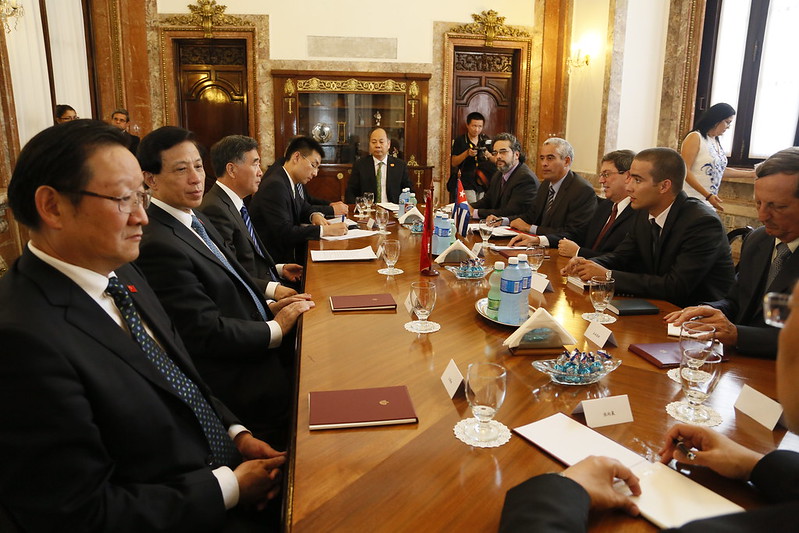 (republished with permission from The London Globalist)

Cuba officially entered the Energy Partnership of China’s Belt and Road Initiative (BREP) at the second Ministerial Conference of the BREP on October 18. At the event, Cuban Energy Minister Liván Arronte Cruz called for “solidarity” and “international cooperation in favour of developing countries” in order to achieve the United Nations’ (UN) Sustainable Development Goals. Such appeals risk becoming a banal formality in Washington and the Western media, but China is likely to be listening attentively, as it considers such statements to be potential opportunities to expand its footprint in Latin America. By investing in the development of Latin American countries like Cuba, China is challenging the United States’ (US) historical dominance in Latin America.

Countries that once depended on the good will of the US to finance their development are now presented with an alternative path. From Cuba’s experience, others in the region can now pursue another form of development, one not wholly reliant on the US. The question now is whether the US will realise that its current policy of sanctions and coercion in Latin America is failing to compete against China’s growing influence.

It is unsurprising that Cuba would actively pursue investment beyond the US. The island has been under an American-imposed economic embargo since Fidel Castro’s revolution defeated the US-backed Batista dictatorship in 1958. In spite of this, Cuba has found an ally willing to invest – the People’s Republic of China.

China made it clear to Cuba from early on that their relationship transcends basic trade relations. This was expressed clearly in 2011 when China cancelled six billion USD of Cuba’s debt and again in 2019 through Cuba joining the Belt and Road Initiative (BRI). The nature of the BRI and other projects has allowed Cuba to become further self-sufficient – something which a country under strict embargo desperately needs. Since 2006, China has used the BRI to finance renewable energy initiatives in Cuba, aiding the country’s goal to reach 24% renewable energy by 2030. This in combination with Cuba’s strict local regulation has bolstered significant progress in the development of Cuba’s renewable energy sector. For example, the construction of solar parks like those in Pinar del Rio provides electricity to local communities susceptible to blackouts due to energy insecurity, contributing to Cuba’s pursuit of self-sufficiency.

China’s support in Cuba’s fight against Covid-19 cannot be neglected when considering the strengthened relationship between the two nations. In August, China donated medical supplies such as ventilators, testing kits, and surgical gloves to Cuba, one of many donations of desperately needed supplies which China made to countries facing shortages during their battle with the pandemic. Such actions are likely to attract the attention of countries in the region, as China has proven to be a reliable partner to Cuba in addressing the pandemic.

While China has empowered Cuba by bolstering its economy and its fight against Covid-19, the US has pursued a path that undermines Cuba’s economy and subsequently Cuba’s response to the pandemic which has, in turn, weakened the image of the US both regionally and globally. The US has attempted to further isolate Cuba’s economy by heavily sanctioning Venezuela, a country with which Cuba has strong economic ties. These attempts to undermine Cuba’s economic capabilities, especially strengthening the embargo, have been heavily criticised by the international community. In June, the UN General Assembly voted in favour of lifting the blockade by 184 to 2, a motion that has passed for the 29th consecutive year.

During the Covid-19 pandemic, the US maintained its efforts to limit Cuba’s development, severely damaging its ability to combat the virus. As a result, America’s reputation has been compromised in the region and further US policy has failed to improve that image. Examples like the US-led statement criticising Cuba’s response to protests in July of this year, alongside other political figures like US Senator Marco Rubio, was seen as hypocritical given that one of the signatories was Colombia, a country in which 63 people died in nation-wide protests during May of this year, which has seen no response from the US on par with its criticism of Cuba.

The situation in Cuba is one of many examples of the battle for influence between China and the US currently playing out in the Latin American theatre, as well as the rest of the world. Like in Cuba, China’s policy work in the rest of Latin America has focused on investment and medical support, and China increasingly fills the void of infrastructure development that the US fails to address. However, as China’s regional influence grows, the question to be asked is whether this influence is sustainable. Historically, the US has not sat idle in Latin America, and it is unlikely to tolerate a major geopolitical competitor like China intruding into its ‘backyard’. We can see these policies already taking shape. The US has increased sanctions on target countries like Cuba and discouraged nations in the region like Panama from working with China. It is clear that the US looks to maintain its geopolitical dominance in Latin America by punishing countries that seek support from others that may threaten US interests.

Due to the emergence of Chinese influence in Latin America, the United States’ standard policy approach of economic coercion is likely to be less effective. Perhaps a decade or so ago Latin America had no choice but to rely on the US for development aid, but the US is no longer the only major power in the region. The US must realise that using a stick to keep the region in line is becoming less effective and, if it truly wants to challenge Chinese “debt-trap diplomacy”, it must provide a better option. Latin America wants to economically develop, and it is unlikely to continue to tolerate the US working against that objective.

Aidan Cross is an Americas correspondent for The London Globalist and a member of the CODEPINK Peace Collective. He is an undergraduate studying International Relations and Chinese. His main fields of interest include China’s engagement with the developing world, the Belt and Road Initiative, changes in the global order, and America's image and influence in the world.