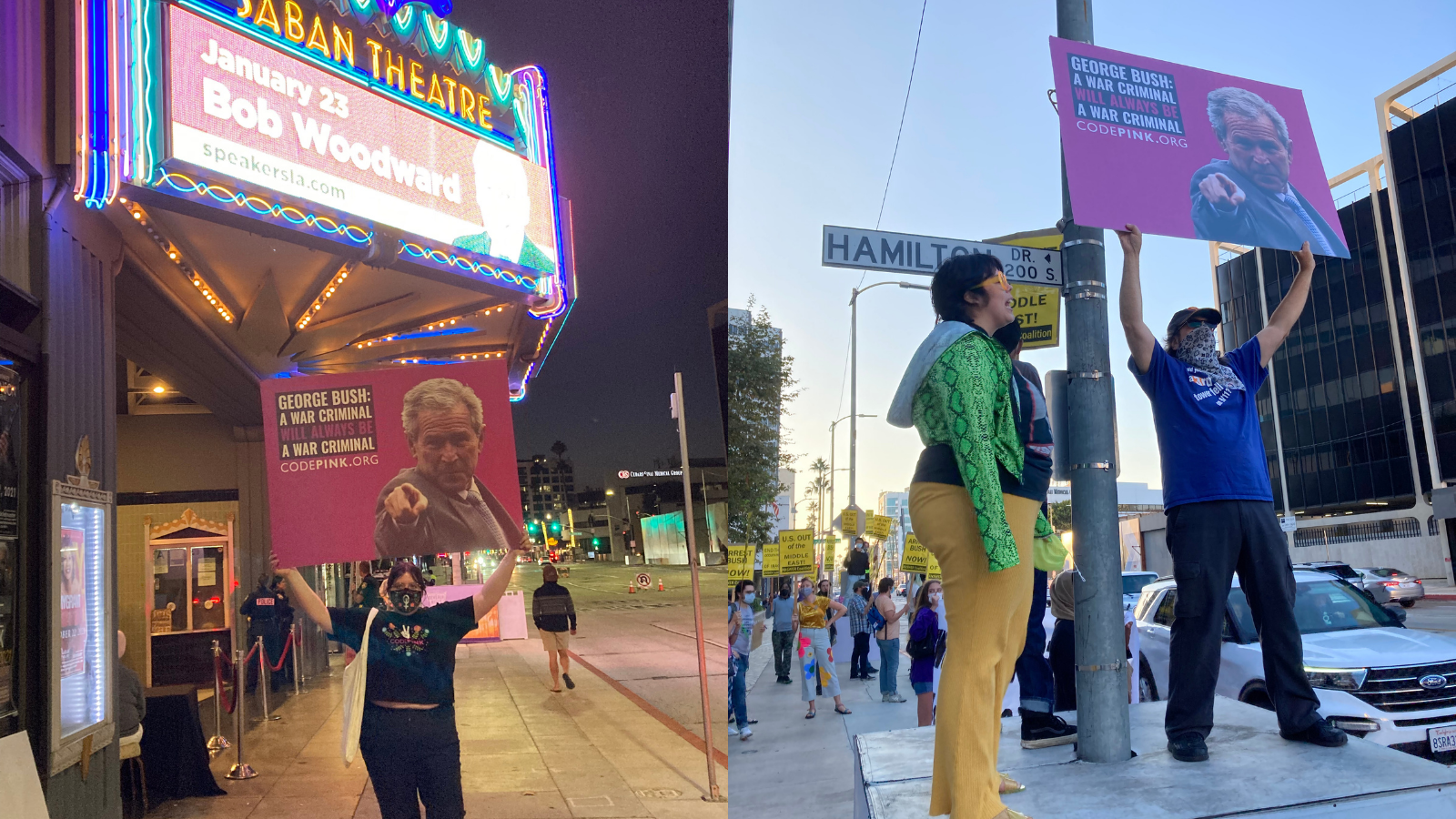 As attendees, who paid upwards of $600 a ticket, streamed into the event spaces in Los Angeles and Long Beach, they were met with protests educating them about the true legacy of George W. Bush. 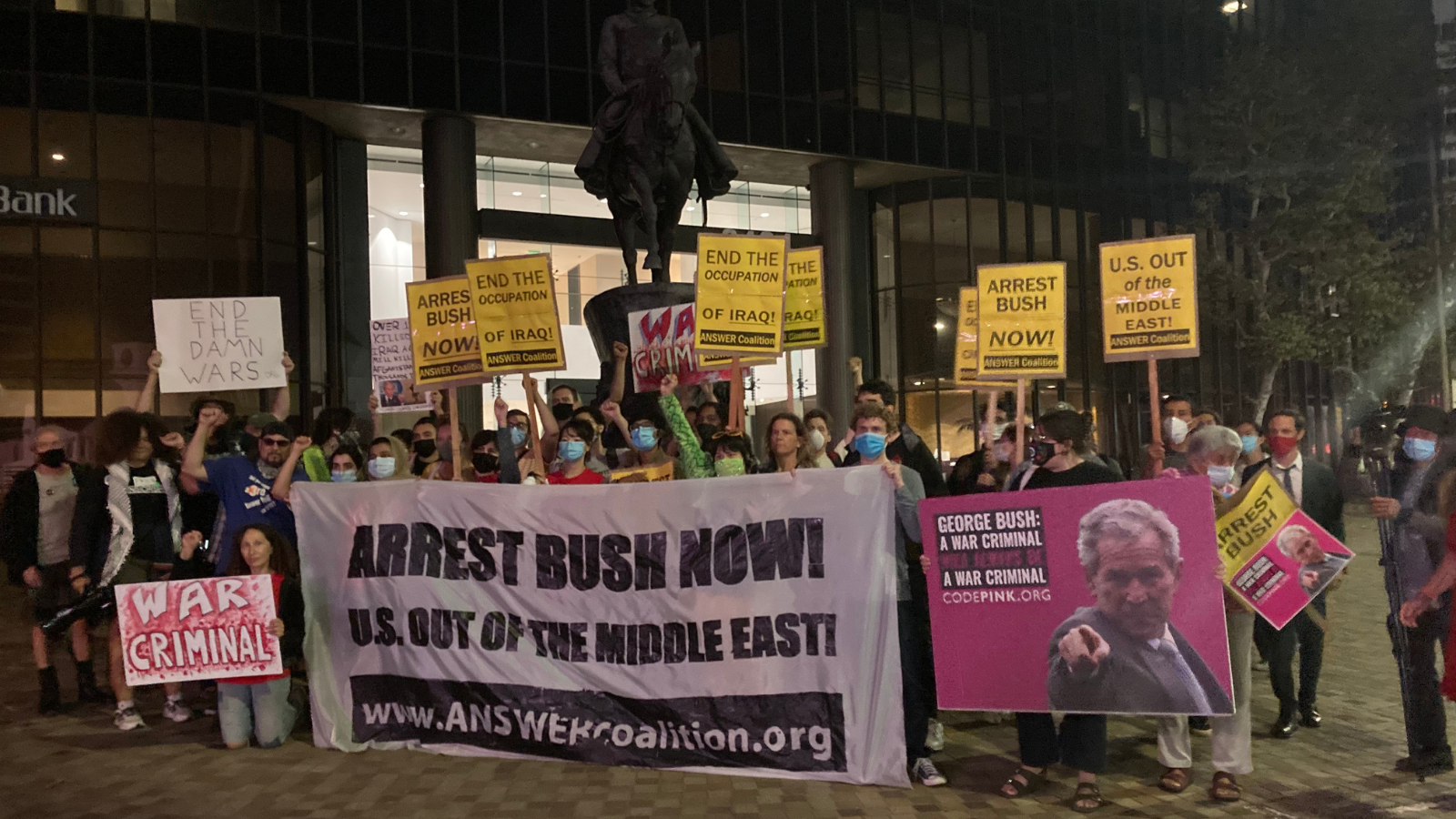 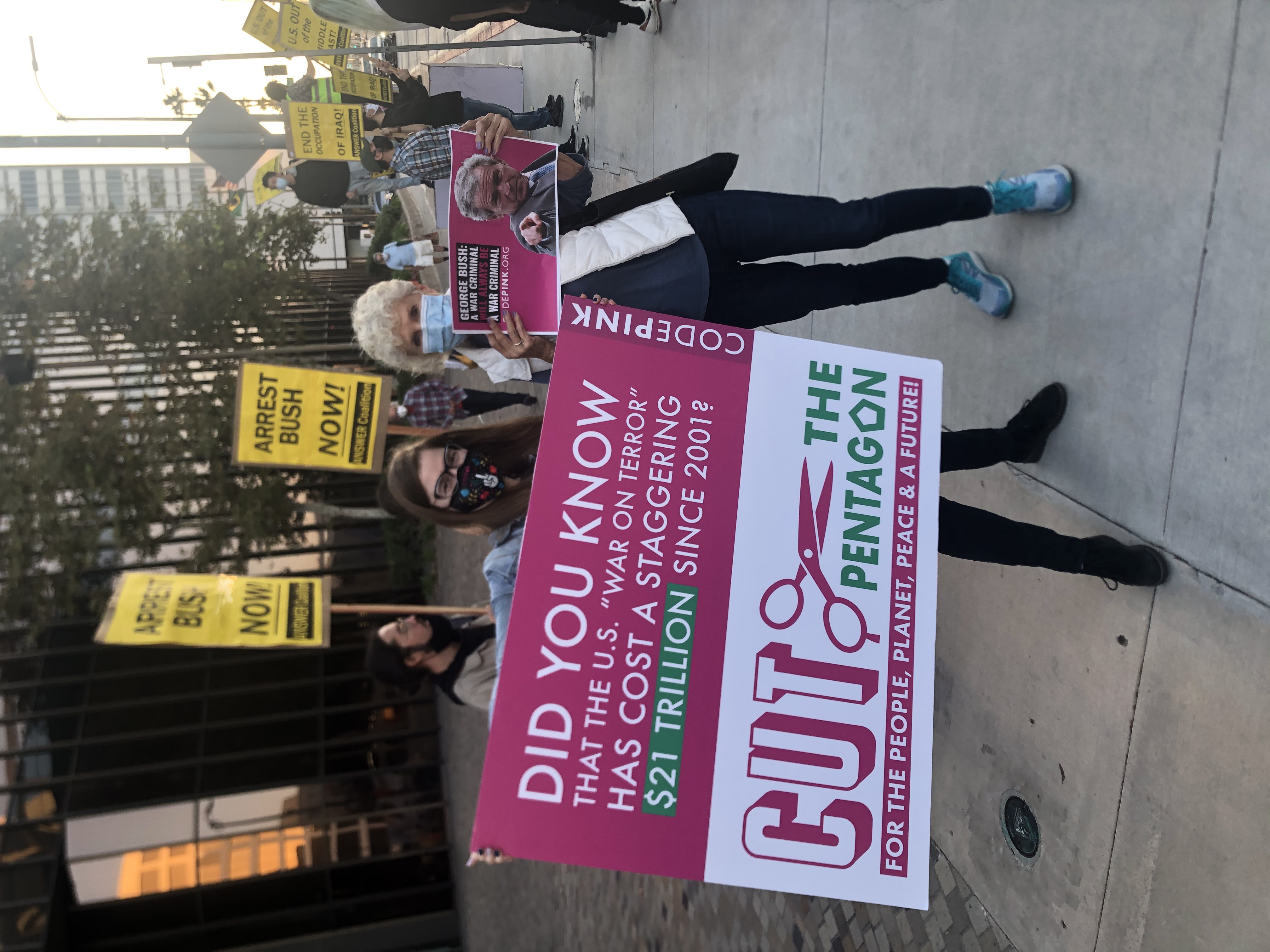 ANSWER coalition activist and veteran Mike Prysner also went inside the venue to disrupt the event and confront George W. Bush directly. You can watch the whole video here.

CODEPINK National Co-Director Carley Towne also spoke at the Los Angeles rally about the costs of the War on Terror, her speech is below:

Hi everyone, my name is Carley Towne, the National Co-Director at CODEPINK which is a women-led anti-war organization working to support peace initiatives and redirect our tax dollars away from war and into socially-necessary programs

CODEPINK began in 2002, leading up to the United States’ war on Iraq.

During that time, politicians and the media used every trick in the book to lie us into war with a country that had nothing to do with September 11.

We’re here today because the President of the United States at the time, George W. Bush, lied our country into two decades of deadly, destructive and costly wars.

We’re here today because we cannot allow our collective and historical memory to remember George Bush as anything other than an unrepentant war criminal who has the blood of hundreds of thousands of innocent people on his hands.

We stand here today, nearly 20 years later, after spending two decades and $21 trillion to prop up the deadly, destructive, and immoral U.S. war machine in the so-called ‘War on Terror’,

We are at a real crossroads.

We are already facing the deadly effects of climate change. In California alone, this has meant accelerated, larger, and more deadly fires.

We remain in the midst of a deadly global pandemic with over half a million dead. Make no mistake-- this was not an inevitable outcome. It was the outcome of a country that puts profit over people, refusing to fund a universal healthcare system that would cost a tiny fraction of the price that we spent over the past two decades on the war on terror.

And that is another important historical lesson we can’t allow to be lost over time.

George W. Bush lied us into deadly wars that have since cost not only countless lives but trillions of dollars.

Many people point to this as a hypocrisy-- George Bush, fiscal conservative, was willing to spend trillions on war while slashing funding at home.

But we have to understand that this is not a hypocrisy in the slightest.

Both of these things-- spending trillions on war and refusing to fund public goods like healthcare, good jobs, and education-- exist compatibly in the minds of someone like George W. Bush.

Because of those $21 trillion dollars we spent on the War on Terror, $16 trillion went to the military — including at least $7.2 trillion for private military contractors.

What war mongers like George Bush want is to declare war so we can continue to funnel more and more money into the pockets of private military contractors-- whose wealth has skyrocketed since the beginning of the war on terror.

And war mongers like George W. Bush are perfectly comfortable doing this at the expense of everyone else. At the expense of funding the public goods that we need to survive.

So, as we stand here today, two decades after the beginning of the so-called war on terror we must seize this moment and do what the peacemakers have been calling for:

Since the beginning of CODEPINK, we’ve been in the streets and the halls of Congress using our  creativity to disrupt war for profit and destruction.

That’s why we are building a big tent to mobilize vigils, marches, sit-ins, teach-ins, demonstrations, and other types of daily direct actions in Washington DC and across the country, wherever we can find war profiteers and weapons manufacturers.

These actions are aimed at exposing the cost of war to all of us. Instead of losing hope and continuing to fund U.S. imperialism, we will use these grim milestones to expose the lies and drive home the senselessness of obscene war spending with one clear demand: CUT THE PENTAGON for People, Planet, Peace and a Future.

You can go to www.cutthepentagon.com to sign up and join this growing movement.