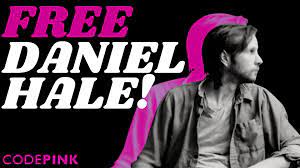 Hale, who leaked documents to The Intercept, is serving his 45 month sentence at the federal prison in Marion, Illinois and is held in the Communications Management Unit (CMU). These units are referred to as “Little Guantanamo” because of their draconian restrictions on communications to the outside world. Inside, Hale is not able to get proper treatment for Post Traumatic Stress Disorder.

The petition addresses President Biden, who is the only person who can release Hale from prison. The signatories say that they “believe that rather than harm our country, Hale’s revelations actually enhanced our democracy by providing critical information about what our government has been doing in our name.”

“Daniel Hale should be free. Not only did he admit wrongdoing, the prosecutors never demonstrated that his revelations caused any harm to our national security. He is not a threat to society, and he deserves to be with his family again and seek the treatment he needs” said Danaka Katovich, National Co-Director of CODEPINK.

Natasha Erskine, Organizing Director of About Face Veterans Against the War spoke at a press conference in support of Daniel Hale and said the support team was demanding President Biden “Commute [Hale’s] sentence to time served– so that he can begin to the difficult path of continuing to heal from what he experienced and to be rejoined with his community that is looking forward to supporting him and the needs that we know he is going to have.”