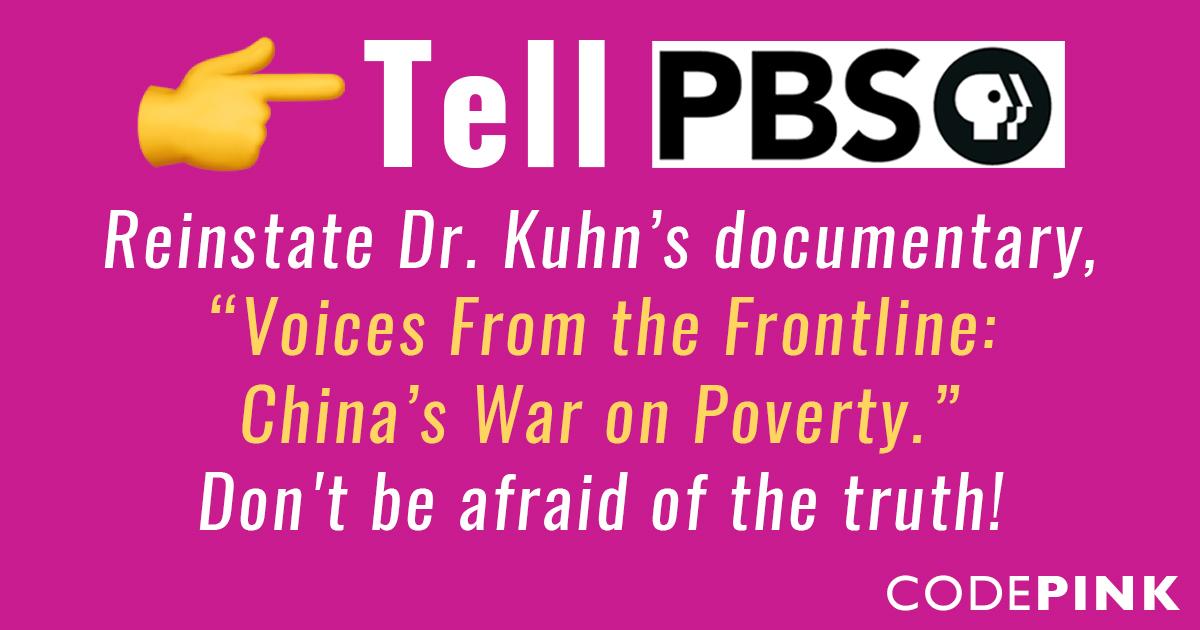 The letter, with over 3,600 signatures, calls on PBS to stop censoring Peter Getzels’ and Dr. Robert Lawrence Kuhn’s documentary film Voices from the Frontlines: China’s War on Poverty.

The documentary examines the techniques and the 5 levels of government that coordinated to bring 800 million people out of poverty and eliminate extreme poverty in China entirely. The film utilizes the same style and methods as previous documentary work on China by Getzels and Kuhn that aired on PBS to critical acclaim and won an Emmy.

Peter Getzels, director of Voices from the Frontlines: China’s War on Poverty, maintains that what changed wasn’t the authenticity of his content but the political environment that has increasingly less tolerance for positive stories and perspectives on China. “We didn't change the way we work, we didn’t change our perspective, and yet the world changed, the zeitgeist changed, and we find ourselves in the vicissitudes of being subject to current political trends and habits,” says Peter Getzels.

PBS’s “Mission & Values” claim to use “media to educate, inspire, entertain and express a diversity of perspectives,” including with “documentaries that open up new worlds,” but instead they are foreclosing perspectives into China by censoring this documentary.

“PBS is a publicly-funded entity that owes the taxpayers who support its programing educational and unbiased information.” says Madison Tang, coordinator of the CODEPINK China Is Not Our Enemy campaign. “Yet PBS is censoring a documentary that offers neutral, rational insight into poverty alleviation policies the Chinese government has implemented for its citizens during a critical time of heightened anti-China rhetoric and Congress’s ramp-up of hybrid war on China. By censoring this film, PBS is essentially forcing U.S. citizens to pay for propaganda and anti-China bias on PBS programming. PBS must reinstate this documentary to provide the fair and balanced perspective that its viewers need and deserve.”

Media from this action will be available here.