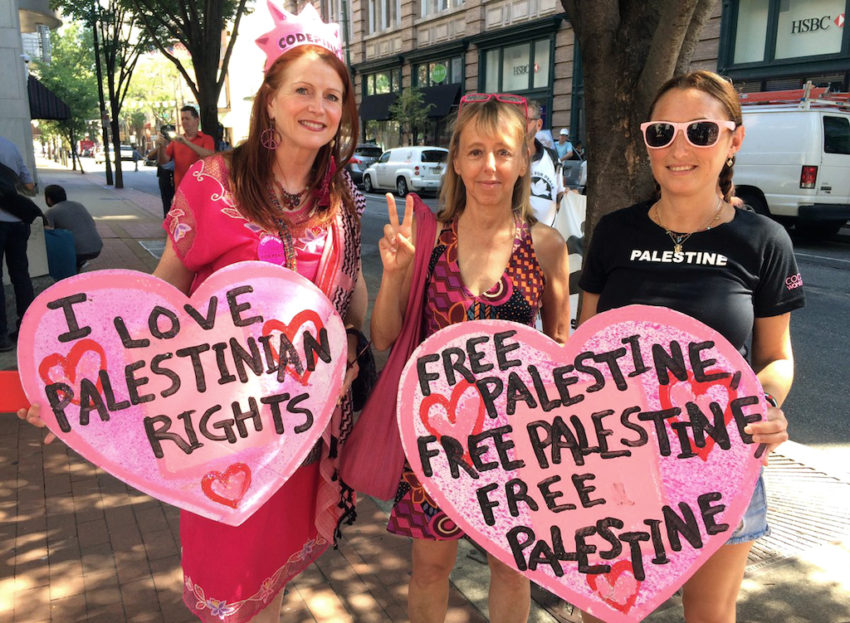 November 19, 2020 — Outgoing Secretary of State Mike Pompeo, following a visit to an illegal Israeli settlement today, falsely declared the nonviolent Boycott, Divestment, and Sanctions (BDS) movement to be antisemitic. The misleading declaration follows a series of harmful actions taken by the Trump administration — moving the U.S. embassy to Jerusalem, declaring the Golan Heights to be Israeli territory, falsely claiming that Israeli settlements are legal — to violate international law and trample on Palestinian rights.

“Mike Pompeo’s designation of the BDS movement as antisemitic and illegal shouldn’t surprise anyone, given the Trump administration’s efforts at every turn to prop up the apartheid state of Israel and shield it from international criticism,” said CODEPINK national co-director Ariel Gold. “While the false designation of BDS as antisemitic won’t change the fact that BDS is a legitimate nonviolent tactic, it risks hindering efforts to recognize real antisemitism. As an American Jew, I have watched in horror as antisemitism has risen dramatically under Trump’s presidency, thanks to his administration’s and the Republican party’s willingness to trade in and tolerate antisemitic tropes. This new shameful act by them to try to shut down the movement for Palestinian rights will not be successful. Our joint struggles against all forms of racism, including antisemitism and Israeli apartheid, will continue by the vast numbers of us committed to freedom, justice, equality, and safety for all.”

The Trump administration’s claim follows a January 2018 move by the state of Israel to declare 20 organizations worldwide that support BDS, including CODEPINK, to be banned from entering the county (Israel did, in fact, deport CODEPINK’s Ariel Gold when she tried to enter the country later that year to work on the ground with nonviolent Palestinian activists). Last month, in October 2020, it was reported that Pompeo was considering labeling human rights and aid groups, such including Amnesty International, Human Rights Watch, and Oxfam, as antisemitic. It seems that the attack on the BDS movement was the beginning of that.

Thankfully, President-elect Joe Biden affirmed during his campaign that, though he does not himself support the BDS movement, he does recognize that it is a protected form of free speech under the First Amendment.

CODEPINK is proud to support the BDS movement and to be a staunch defender of Palestinian human rights. CODEPINK has led solidarity tours to Palestine, including bringing 800 people to the besieged Gaza Strip. We have organized successful BDS campaigns against the cosmetics company AHAVA and SodaStream, and we advocate for members of Congress to support conditioning U.S. military assistance to Israel until the country ends its human rights abuses against the Palestinian people. CODEPINK is currently campaigning for Congress to block the Trump administration’s agreement — part of the normalization deal between Israel and the UAE — to sell billions in weapons to the United Arab Emirates.

CODEPINK co-founder Medea Benjamin spoke out in response to the new designation by the State Department that the BDS movement is antisemitic: “It’s outrageous that the U.S. government would label a Gandhi-like boycott movement that has historically been the bedrock of nonviolent social change movements as antisemitic. Our response to the false designation will be to increase all efforts to challenge Israeli policies of occupation and apartheid and galvanize public opinion for freedom and justice in Palestine. We remain committed to using nonviolent BDS tactics to reveal corporate complicity in Palestinian human rights violations.”

As a student activist that has organized alongside of Palestinian student groups, I have seen the false conflation of BDS with antisemitism be used in attempts to destroy future careers and impede the work for human rights and dignity for all,” said CODEPINK Middle East campaigner Danaka Katovich. “This new false designation that BDS is antisemitic will serve to trample on our rights to organize peacefully and widen the targeting of students who speak out for Palestine, especially Muslim and Arab students. It is a shameful act that I hope will be reversed in the early days of the Biden administration.”