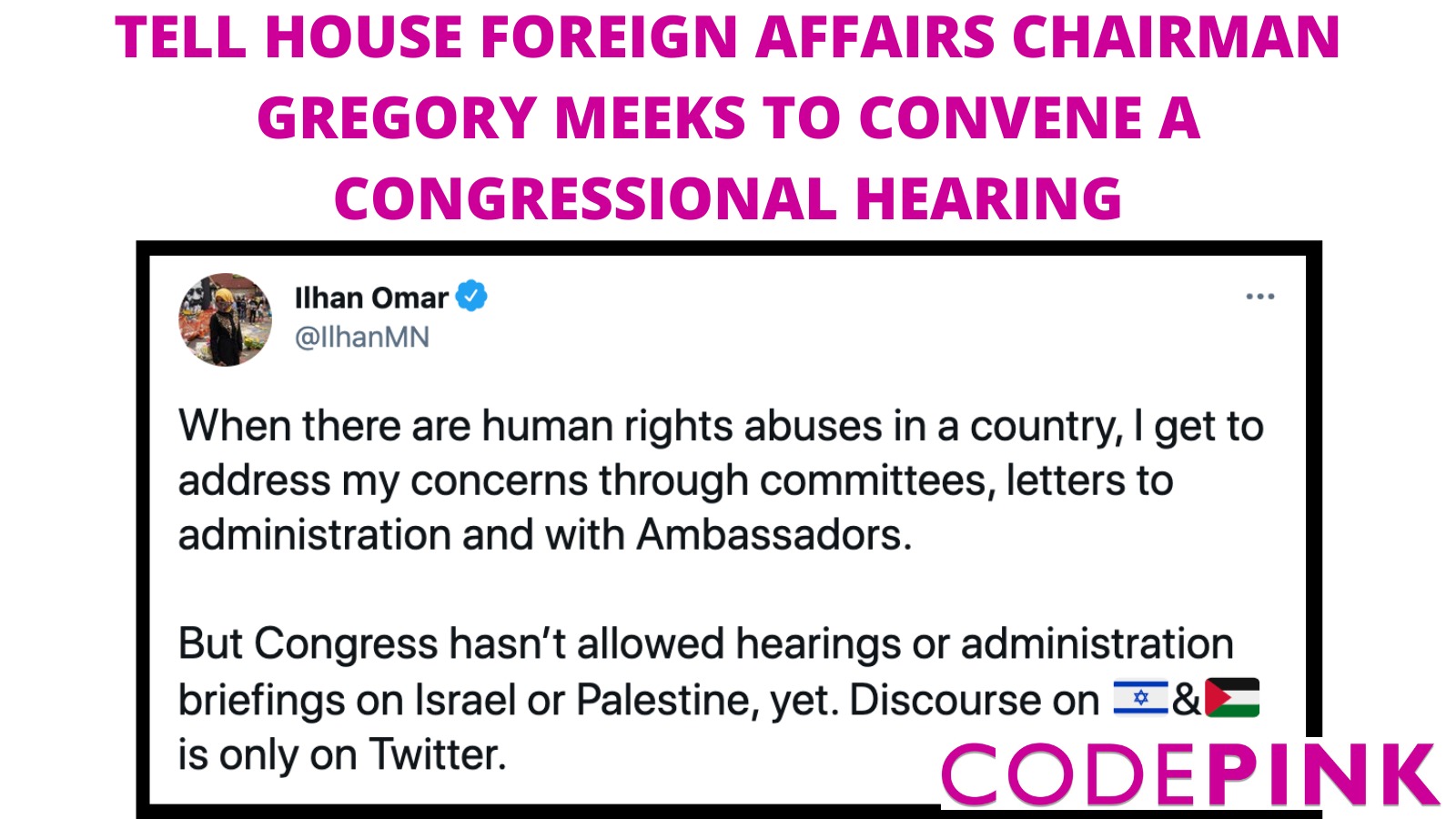 Since we last reached out to you, things have gotten worse in Palestine. Israel is continuing its aerial bombardments of Gaza. As of this morning, over 125 people have been killed, 40% of which have been women and children. And now the Israeli military has moved tanks to the Gaza border and is considering a ground invasion. On top of all of this, gangs of violent Jewish extremists are marauding through the streets of central Israel beating Palestinians and smashing their businesses. In one case, a Palestinian Israeli citizen was pulled out of his car and viciously beaten. Even after he was unconscious, the thugs continued to kick and punch him.

The US is complicit in all this to the tune of $3.8 billion a year.

On Wednesday, Representative Ilhan Omar tweeted: “When there are human rights abuses in a country, I get to address my concerns through committees, letters to the administration and with Ambassadors. But Congress hasn’t allowed hearings or administration briefings on Israel or Palestine, yet.” That’s wrong and we need your help in calling on House Foreign Affairs Chair Gregory Meeks to schedule a hearing on Israeli apartheid and US military assistance to Israel. Will you sign our petition to him?

Last week, as Palestinians tried to travel from within Israel to the Al Aqsa Mosque in Jerusalem for the holiest night of Ramadan, Israel blocked their busses. But now the racist state is doing nothing about the busloads of Israeli settlers coming in from the West Bank to attack Palestinians. It’s not that the Israeli government doesn’t know what they’re up to. These settlers are organizing their violent “field trips” openly on Facebook. This is what Israeli apartheid looks like and it’s what US tax dollars are funding.

Please add your name to our petition to House Foreign Affairs Chair Gregory Meeks calling on him to convene a hearing on ending, or at least suspending, US military assistance to Israel.

If a hearing is called, such experts as Noura Erakat, Zaha Hassan, James Zogby, Omar Shakir, Omar Baddar, Lara Freidman, and Peter Beinart should be called to testify.

This morning, May 14, at 8:30 AM PT/11:30 AM ET, in a joint event with the Gaza group We Are Not Numbers, we will be speaking live from Gaza with Aziz Abuzayed and Asmaa Tayeh. They will talk about what it is like to worry every moment about being hit by an Israeli airstrike and how even before Israel’s latest massacre, life in Gaza was always under siege. RSVP here to join us. Also, check out all the protests for Palestine taking place around the US and get out in the streets.