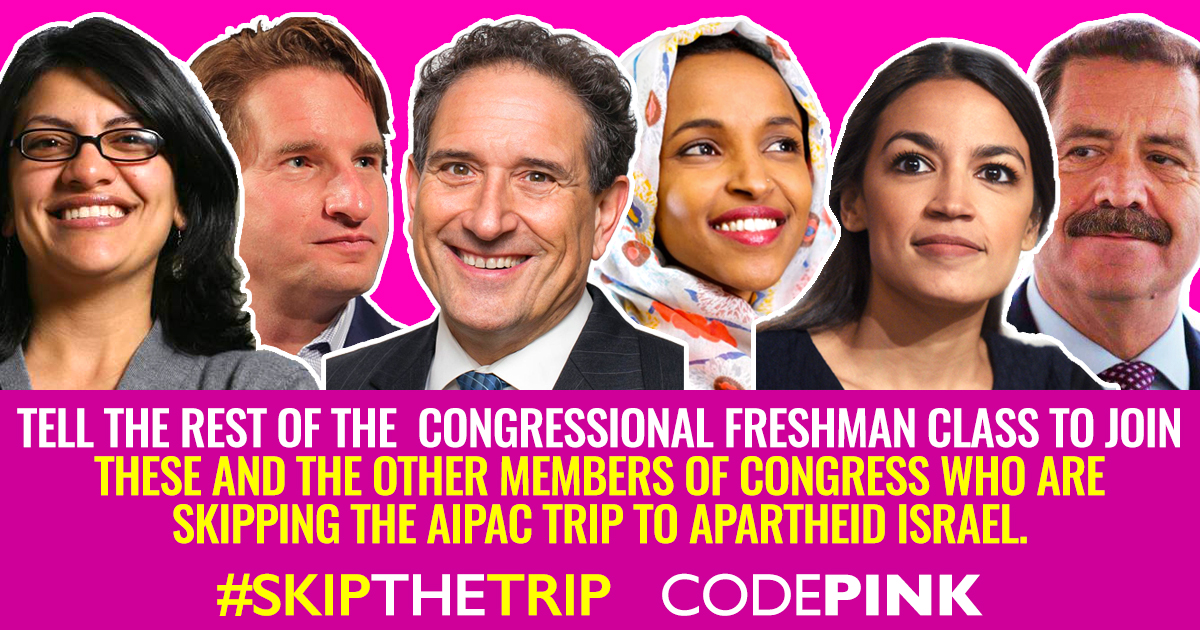 Summer is here, AIPAC is busy planning their freshmen junket trip to Israel, and we know some of who will be attending and who won’t.

Here’s what we know so far about who will and who won’t be traveling with AIPAC:

Take action now: Send a thank you message to those members of Congress who have confirmed they won’t be traveling with AIPAC and appeal to those either members either intending to go or undecided. Tell them to reject AIPAC’s pro-occupation agenda.

The purpose of the AIPAC trip is to whitewash Israel’s human rights violations and continue unchecked U.S. financial and diplomatic support for Israel at the expense of Palestinian rights. That’s why it's so important that members like Tlaib, Omar, and AOC, are skipping the trip out of opposition to AIPAC’s agenda and their efforts to undermine our democracy. It’s even good that members — Reps. Levin, Van Drew, Brindisi, and Kilpatrick, and others — have citing scheduling conflicts for why they won’t be attending. Whatever the reason, the fewer Congress members that travel with AIPAC, the better odds for peace in Israel/Palestine and with Iran.

This year, instead of soaking in propaganda to maintain the status quo, Congress members have a historic opportunity to see Palestine with their colleague Rashida Tlaib, including visiting her grandmother in the West Bank. Since the moment she was elected, Rep. Tlaib has faced vicious attacks for her unapologetic celebration of her Palestinian heritage and her vocal support for justice. Now she is offering her colleagues a chance to see the real situation of occupation, a perspective missing from the AIPAC junket.

Take action now: Email the members either intending to go or undecided asking them to reject AIPAC’s pro-occupation agenda and thank the members skipping the trip. Remind them it isn’t too late to sign up for Tlaib’s trip to see the occupation.

AIPAC makes no effort to hide its agenda — ever larger amounts of military aid to Israel, shielding Israel from accountability for its expansion of illegal Jewish-only settlements, aggression towards Iran, furthering Islamophobia — and going on the AIPAC trip sways members of Congress to vote the way AIPAC demands. AIPAC undermines democracy and prevents us from developing a foreign policy based on respect for peace and justice. The only way to get there is for Congress members is to show political courage and challenge the status quo that maintains unconditional U.S. support for the Israeli occupation. Send a message now to Congress should reject AIPAC and skip the trip.

P.S. Join us this Thursday, June 20, at 9:30am ET for a webinar live from Gaza. We will talk with Salsabeel Hamdan of We Are Not Numbers who just completed a short documentary about Israeli military attacks on Gaza fisherman. RSVP here.