Welcome to Israel, check your free speech & dignity at the door 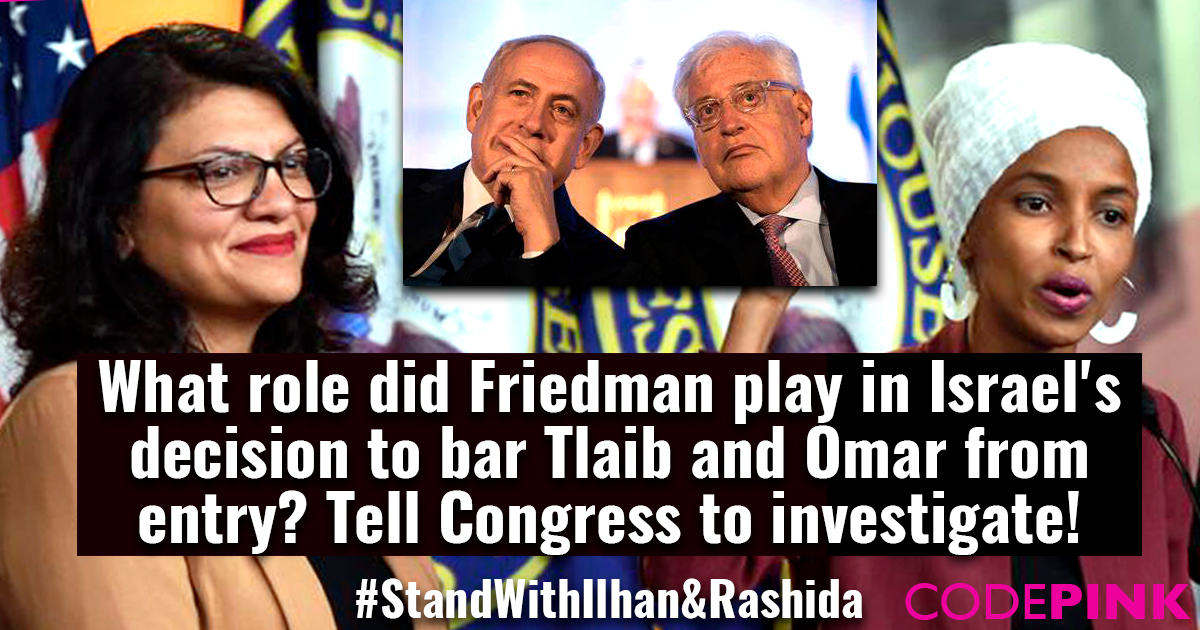 Last week was political whiplash. After Israel’s Ambassador to the US has announced formally that Representatives Tlaib and Omar would not have trouble entering Israel, and as Rashida Tlaib's family in the West Bank village was busy preparing celebrations and a feast to welcome them, on Thursday morning Netanyahu — responding to a request from his comrade in racism Donald Trump — announced the decision had been reversed and the two would be denied entry. Rashida, distraught that she would not be able to see her 90-year-old grandmother, appealed, promising that if they let her in she would not promote any boycotts of Israel while there. 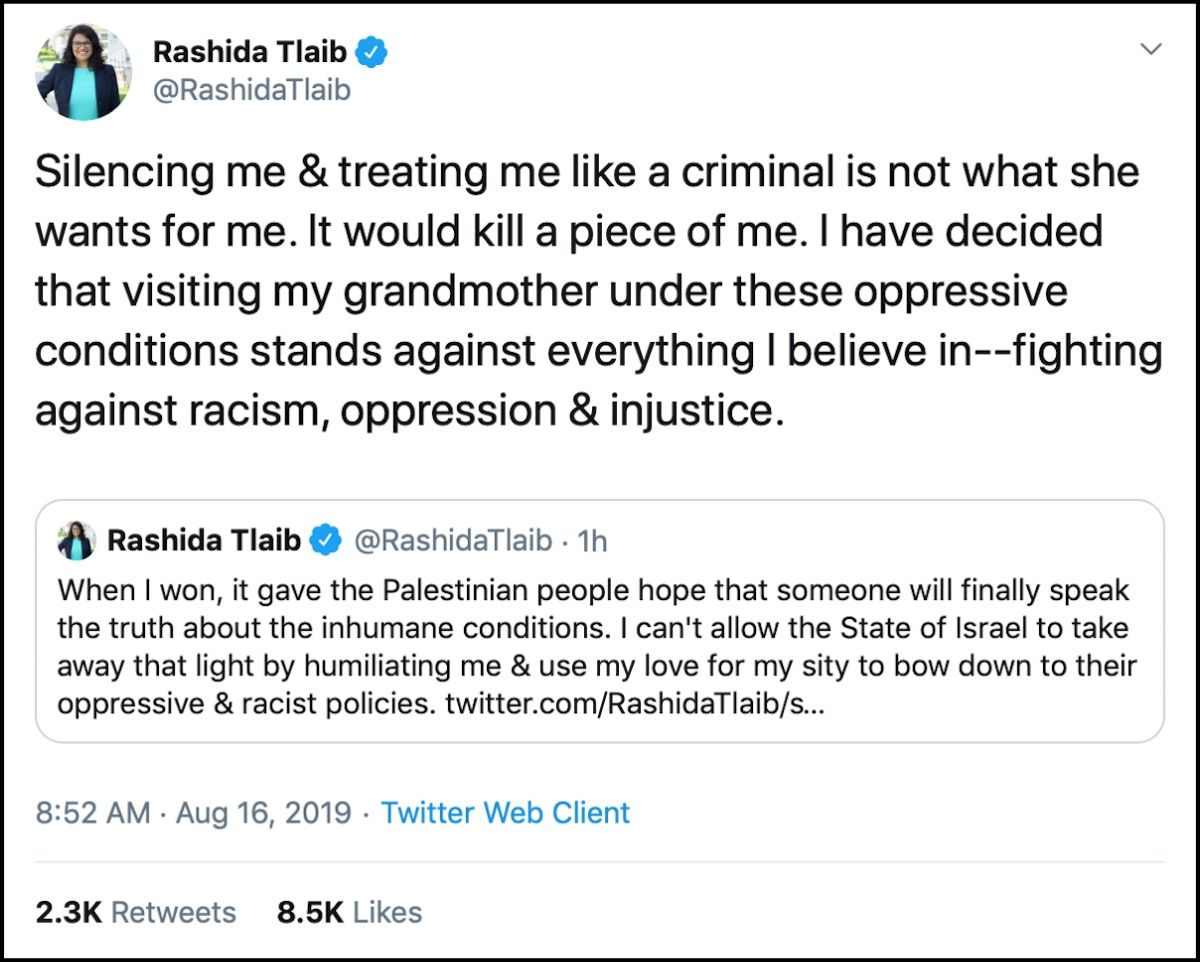 Israel replied that yes, if she agreed to check her free-speech, politics and dignity at the door, she could come in. For a moment it seemed Rep. Tlaib would indeed travel, but after realizing that Israel was presenting her with the cruellest dilemma possible — your principles or your family — she announced that she would not travel. "Silencing me & treating me like a criminal is not what she [my grandmother] wants for me," she stated.

Upon hearing that Tlaib and Omar had been denied entry, Democrats, and even a number of Republicans, responded with outrage. Even AIPAC condemned Israel’s decision! But Trump and Netanyahu aren’t the only villains in the story. David Friedman, the US Ambassador to Israel, put out a statement saying that the US government was in agreement with Israel’s decision to block the congresswomen. Send a message to your representatives in Congress asking them to take action against Friedman.

The Democrats are already weighing action against Amb. Friedman. Yesterday the media reported that Senior Democrats are considering a formal inspector general investigation into the role Friedman played in Israel barring entry to Tlaib and Omar.

In 1975, when Saudi Arabia denied a visa to then Congress member Henry Waxman because he was Jewish, the State Department intervened and Waxman was allowed in. Friedman’s actions against Tlaib and Omar break with that precedent, are not reflective of the position of the US Congress and are horridly Islamophobic. He must be held accountable.
Send a message now to your congressional representatives telling them you wholeheartedly support opening an inspector general investigation into the conduct of the US Ambassador to Israel David Friedman.

Representative Omar shared on Twitter the itinerary she and Tlaib would have participated in had they been able to travel to Palestine. Along with visiting Rashida Tlaib’s family and meeting with many of the Palestinian and Israeli peace organizations CODEPINK has worked with, they would have gone to the very places — such as the heavily occupied West Bank city of Hebron — that AIPAC hides when they take members of Congress on one-sided junket trips to Israel. It is reprehensible that Israel just prevented US Congress members from seeing the full situation, so let’s make sure to take this moment of congressional outrage to get some accountability.

In solidarity with Rashida Tlaib and Ilhan Omar, 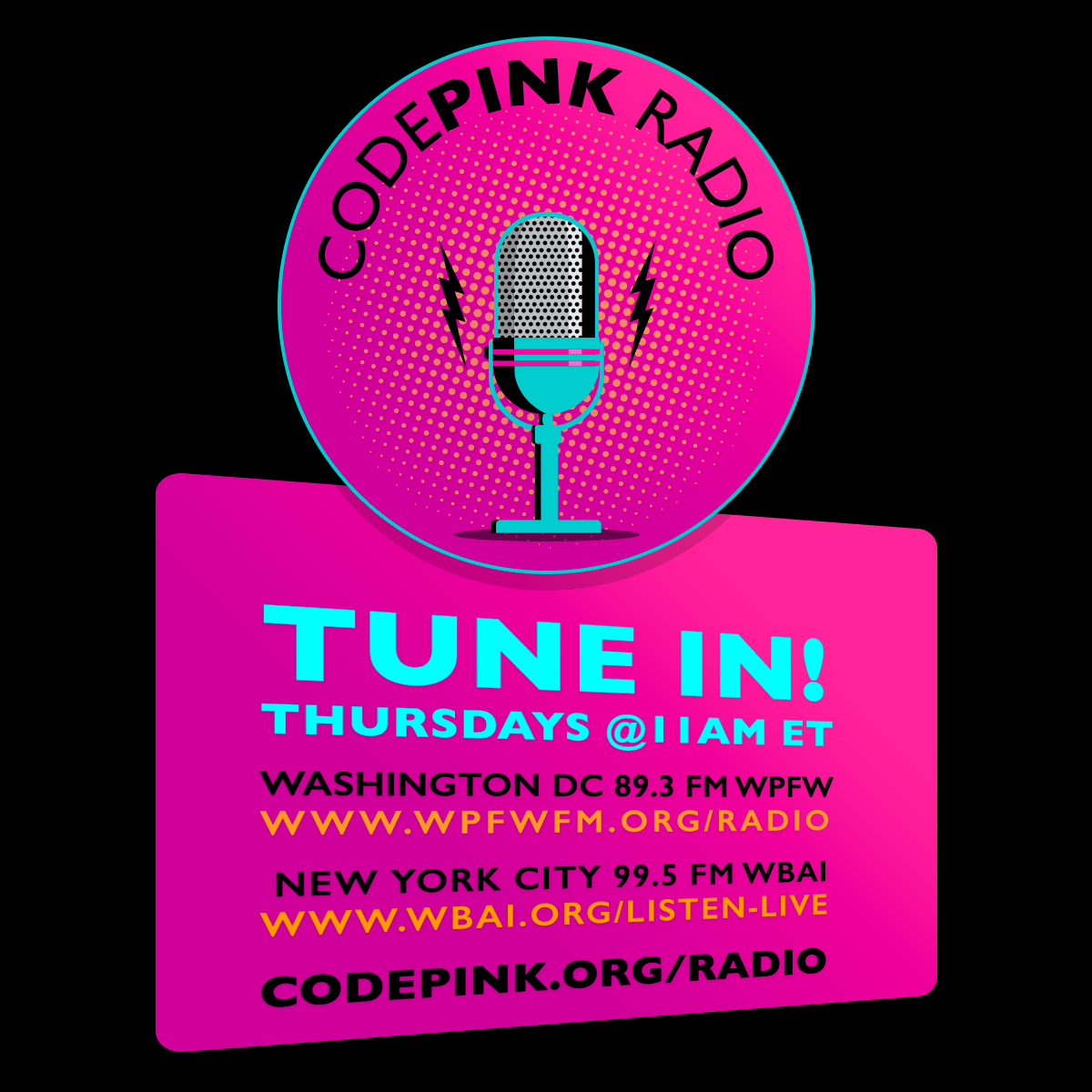 P.S. Don't forget to tune in to our radio show every Thursday at 11am ET.

Also, please sign our petition to the U.N. Security Council to oppose the Indian occupation and blockade of Kashmir and to uphold Kashmiri’s right to self-determination.