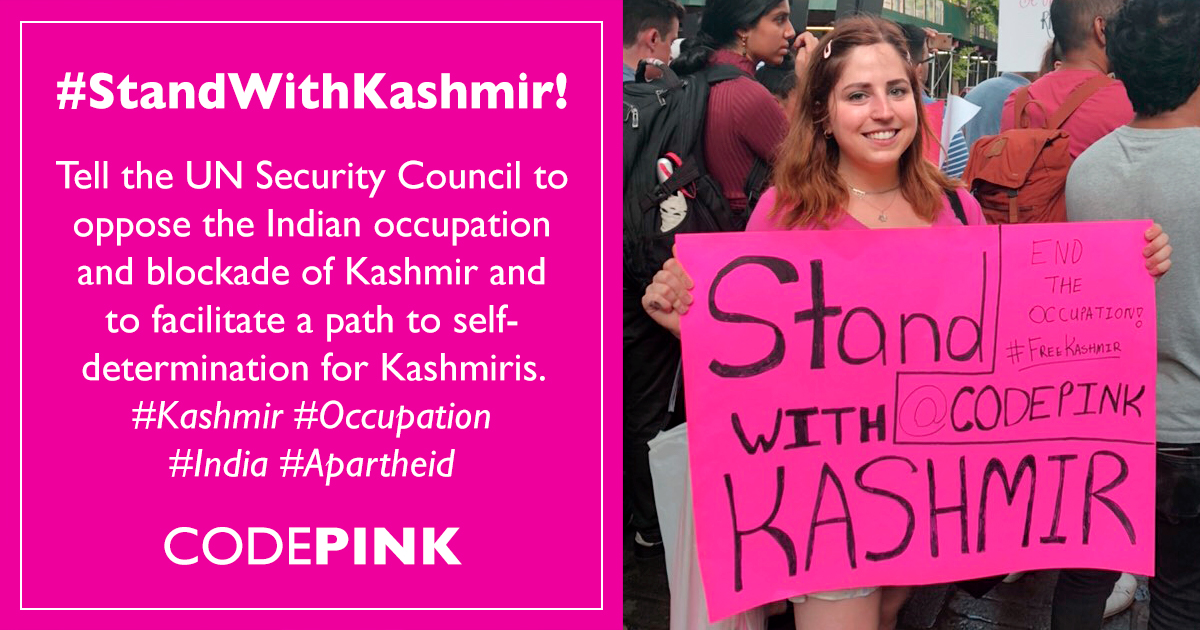 To the United Nations Security Council:

While Kashmiris are struggling for their freedom against India’s aggression, we, a collection of concerned people from all walks of life, are calling on the UN Security Council to take IMMEDIATE action and work to end the Indian blockade of Kashmir and help Kashmiris finally obtain self-determination after seven decades of occupation. Today, Indian occupied Kashmir is the most heavily militarized region in the world, with over 700,000 Indian troops deployed in the region, threatening the safety and autonomy of the Kashmiri people. This conflict is one of the most dangerous flashpoints in the world: we must do everything we can to avoid the risk of escalation between the nuclear-armed Indian and Pakistani forces.

India and Pakistan have fought three wars over Kashmir since the partition of the Indian subcontinent in 1947, causing Kashmir to be split between the two nations — two thirds to India and one third to Pakistan. Because of this, Kashmir’s self-determination and safety has been under attack for seven decades. Indian occupation forces have violated the human rights of Kashmiris, without being held accountable by India and the international community. To date, 70,000 people have been killed in the conflict, 8,000 have disappeared, and countless Kashmiri women have been raped by Indian forces.

While under occupation, Kashmiris had some small protection: Article 370 of the Indian Constitution, which granted Kashmir political, economic, and judicial autonomy. But on August 5th, Indian Prime Minister Modi’s ultranationalist government revoked Article 370, stripping Kashmir of its special status and taking away the little autonomy Kashmiris had. Along with this also comes the dissolution of Article 35A, which allows Kashmiris to have resident rights and control over their own physical territory. Now many Kashmiris fear that Hindu nationalists will set up settlements, similar to the illegal Israeli settlements in Palestine, and expedite India’s settler-colonial project.

Since the revocation of Article 370, India has cut off all lines of communication coming into and out of Kashmir, from cell service, to internet, to landlines. Political leaders in Kashmir across the spectrum have been jailed, and the Kashmiri people have been subject to strict curfews by the Indian military. This hides the actions of the Indian military from the international community and sets the stage for an escalation of violence against Kashmir, a dangerous opportunity for tensions between India and Pakistan to escalate to another war, this time with the added threat of nuclear arsenals.

India is enacting a dangerous, nationalistic agenda to further colonize a people that have been living under India’s occupation and whose communities have been terrorized and stripped of their human rights. The UN Security Council must take immediate action to protect Kashmir from this vicious attack, for the human dignity of the Kashmiri people and for the safety of the world population in a nuclearized world.