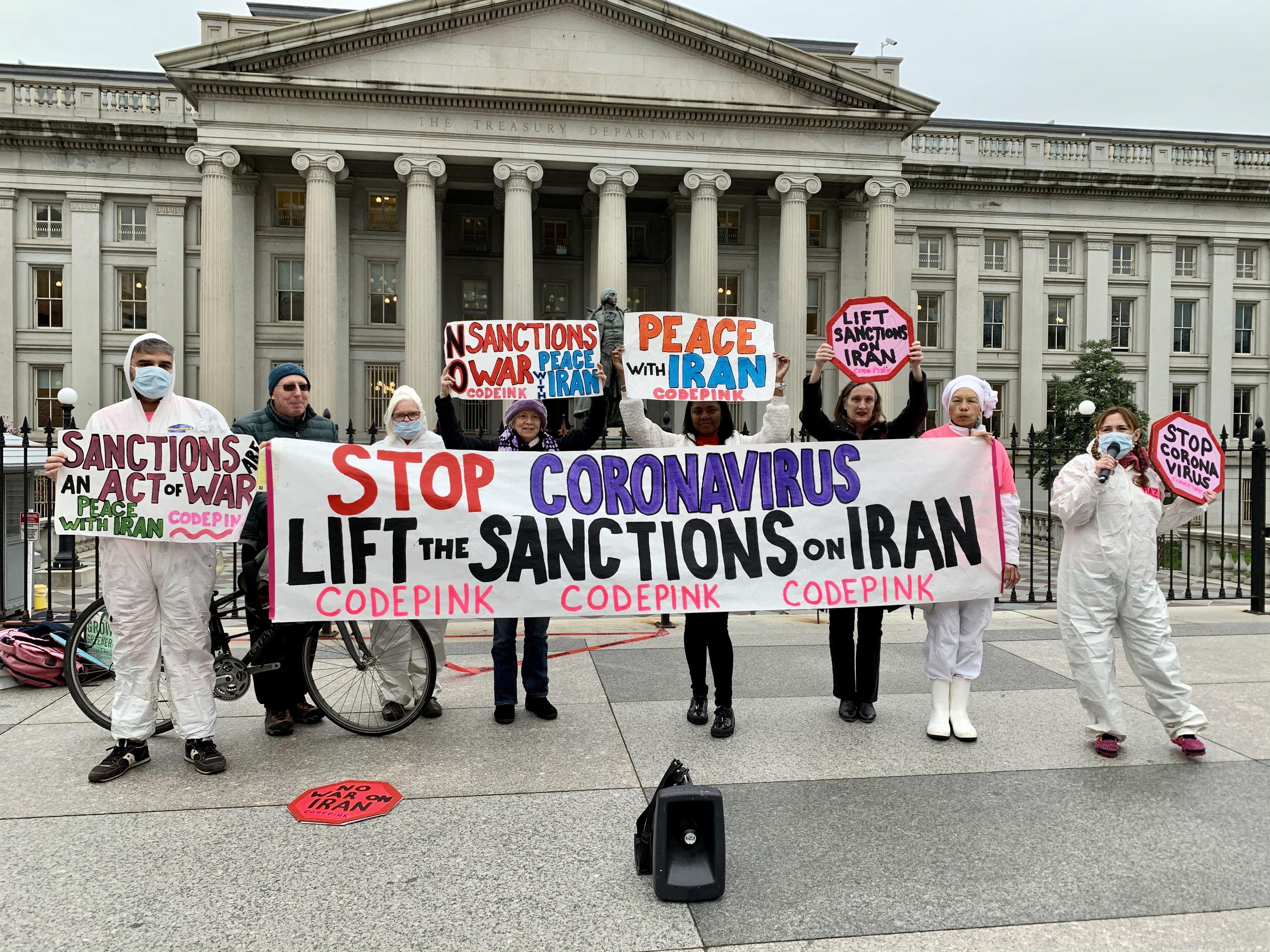 By Ariel Gold and Medea Benjamin

The COVID-19 (coronavirus) pandemic is far from the first proof of how intertwined we are as a global community. The climate crisis and the refugee crisis have long been glaring examples that the wars or CO2 emissions on one continent risk the lives and well-being of people on another continent. What coronavirus is providing, however, is a unique opportunity to look specifically at how the intentional damage caused to one country’s healthcare system can make it harder for the entire world to address a pandemic.

The coronavirus started in China in December 2019 and President Donald Trump immediately brushed it off as something limited to China. At the end of January 2020, he banned entry to the United States of people from China but still insisted that the Americans need not worry. It will have “a very good ending for us,” he said, insisting that his administration had the situation “very well under control.”

Despite Trump’s insistence that the medical pandemics can be contained via travel bans and closed borders, the coronavirus knows no borders. By January 20, Japan, South Korea, and Thailand had all reported cases. On January 21, the U.S. confirmed the infection of a 30-year-old Washington State man who had just returned from Wuhan, China.

On February 19, Iran announced two cases of the coronavirus, reporting within hours that both patients had died. By March 14, at the time of this writing, the total number of coronavirus infections in Iran is at least 12,792 and at least 611 people in the country have died. Per capita, it is currently the most heavily infected country in the Middle East and third in the world, after Italy and South Korea.

In the Middle East, coronavirus cases have now been identified in Israel/Palestine, Saudi Arabia, Jordan, Qatar, Bahrain, Kuwait, UAE, Iraq, Lebanon, Omar, and Egypt. If Iran is not able to stem the crisis, the virus will continue to spread throughout the Middle East and beyond.

By the time the coronavirus hit Iran on February 19, the country’s economy, including its healthcare system, had already been devastated by U.S. sanctions. Under the Obama administration, the Iranian economy was given a boost when the Iran nuclear deal was signed in 2015 and the nuclear-related sanctions were lifted. By February 2016, Iran was shipping oil to Europe for the first time in three years. In 2017, foreign direct investment increased by nearly 50% and Iran’s imports expanded by nearly 40% over 2015-2017.

The reimposition of sanctions after the Trump administration’s withdrawal from the nuclear deal in 2018 has had a devastating impact on the economy and on the lives of ordinary Iranians. The Iranian currency, the rial, lost 80 percent of its value. Food prices doubled, rents soared, and so did unemployment. The decimation of Iran's economy, reducing the sale of oil from a high of 2.5 million barrels a day in early 2018 to about 250,000 barrels today, has left the government with scant resources to cover the enormous costs of dealing with direct medical treatment for patients suffering from the coronavirus, as well as supporting workers who are losing their jobs and helping businesses going bankrupt.

Humanitarian aid—food and medicine—was supposed to be exempt from sanctions. But that hasn’t been the case. Shipping and insurance companies have been unwilling to risk doing business with Iran, and banks have not been able or willing to process payments. This is especially true after September 20, 2019, when the Trump administration sanctioned Iran’s Central Bank, severely restricting the last remaining Iranian financial institution that could engage in foreign exchange transactions involving humanitarian imports.

Even before Iran was unable to procure enough testing kits, respiratory machines, antiviral medicines and other supplies to slow the spread of the coronavirus and save lives, Iranians were having a hard time getting access to life-saving medications. In October 2019, Human Rights Watch (HRW) released a report citing that “the overbroad and burdensome nature of the US sanctions [on Iran] has led banks and companies around the world to pull back from humanitarian trade with Iran, leaving Iranians who have rare or complicated diseases unable to get the medicine and treatment they require.”

Among those in Iran who have been unable to get critical medications have been patients with leukemia, epidermolysis bullosa, epilepsy, and chronic eye injuries from exposure to chemical weapons during the Iran-Iraq war. Now coronavirus is added to that list.

On February 27, 2020, with over 100 people in Iran having been infected and with a reported 16% mortality rate, the Treasury Department announced that it would waive sanctions for certain humanitarian supplies to go through Iran’s central bank. But it was far too little far too late, as the spread of coronavirus is yet to slow in Iran.

The Iranian government is not without blame. It grossly mishandled the beginning of the outbreak, downplaying the danger, putting out false information, and even arresting individuals who raised alarms. China had acted similarly at the start of the virus there. The same can be said for President Trump, as he initially blamed the virus on Democrats, told people not to practice social distancing, and refused to accept tests offered by the World Health Organization. Today, there are still nowhere near enough tests in the U.S., Trump is refusing to have himself tested despite having been in contact with infected individuals, and he continues to label this a “foreign virus.” Neither China nor the U.S., however, have the compounding problems of sanctions that prevent them from obtaining the necessary medicines, equipment, and other resources to address the crisis.

It isn’t just Iran that is sanctioned. The U.S. imposes some form of sanctions against 39 countries, affecting over one-third of the world’s population. In addition to Iran, Venezuela is one of the countries most hard hit by U.S. sanctions, including new measures just imposed on March 12.

According to President Nicolas Maduro, Venezuela does not yet have any coronavirus cases. However, sanctions have contributed to making Venezuela one of the most vulnerable countries in the world. Its healthcare system is in such shambles that many public hospitals often do not have water, electricity, or basic medical supplies and many households have only limited access to basic cleaning supplies such as water and soap. “As of today, it has not reached Venezuela,” President Maduro said on March 12. “But we have to get ready. This is a time for President Donald Trump to lift the sanctions so Venezuela can buy what it needs to face the virus.”

Likewise, the Iranian government, which is now asking the International Monetary Fund for $5 billion in emergency funding to fight the pandemic, has penned a letter to United Nations Secretary-General Antonio Guterres calling for U.S. sanctions to be lifted. CODEPINK is both petitioning the State Department to lift the sanctions on Iran and offering a way for people to donate for medical supplies to reach Iran to fight the pandemic.

There are sweeping changes President Trump needs to make to seriously address the coronavirus pandemic at home and abroad. He must stop minimizing the crisis and insisting that people do not need to exercise social distancing. He must stop falsely claiming that testing is available. He must stop catering to the greedy, profit-based healthcare industry. In addition, and no less important, the Trump administration must lift the sanctions on Iran, Venezuela and other countries where ordinary people are suffering. This is not a time to squeeze countries economically because we don’t like their governments. Economic sanctions destroy healthcare systems and kill people. They are a form of warfare and a spreader of pandemics. It’s a time to come together, as a global community, to share resources and best practices. If coronavirus is teaching us anything, it’s that we will only defeat this terrible pandemic by working together.

Ariel Gold is national co-director of CODEPINK for Peace