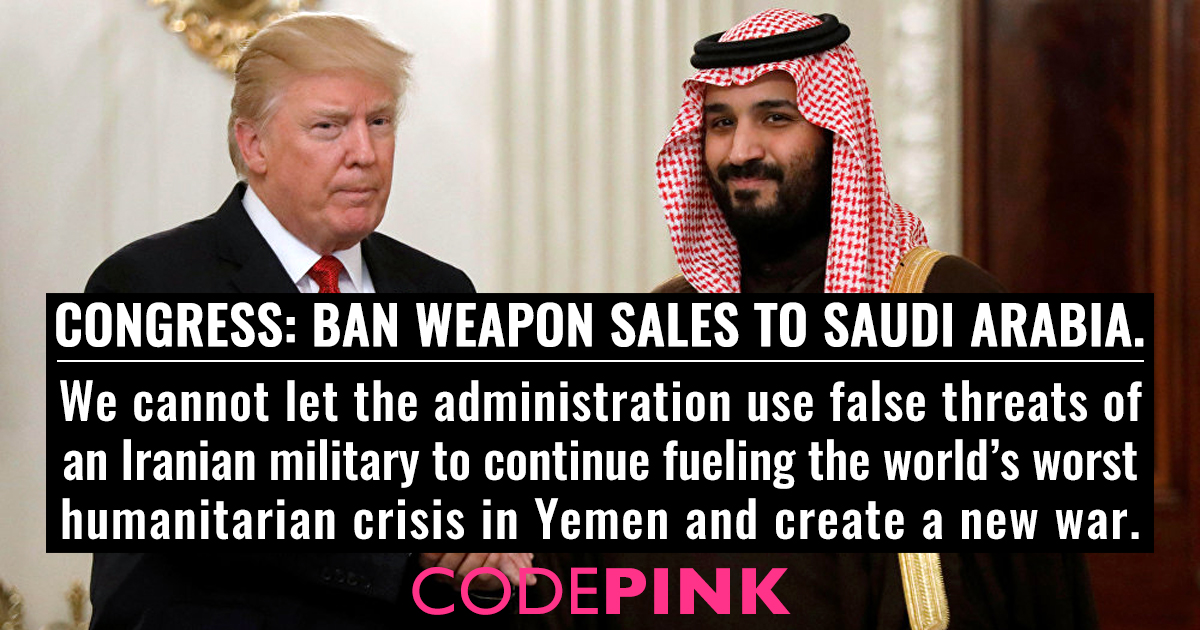 The Saudis just killed 12 Yemeni civilians, including 7 children, and now the Trump administration wants to sell them more weapons. In a reckless attempt to bypass Congress and stir up conflict with Iran, the Trump administration declared a fake emergency to justify selling $8 billion worth of weapons to Saudi Arabia and the United Arab Emirates. Congress can counter this by putting a ban on weapons sales to Saudi Arabia in the 2020 National Defense Authorization Act. Tell Congress to act now to stop this sale.

The last few weeks have made it clear that members of the Trump administration, specifically National Security Advisor John Bolton and Secretary of State Mike Pompeo, are manufacturing an emergency to build a case for war with Iran. The latest move in their maximum pressure campaign is to say these weapon sales are critical for the Saudis to defend themselves against Iran.

The administration wants to do an end-run around Congress because members of Congress, angry about the huge civilian toll from the air campaign in Yemen and the Saudis gross human rights abuses at home, have been blocking military sales for months. Trump and his advisors know that Congress would disapprove of selling more weapons to Saudi, that’s why they are calling a national emergency to do so.

The Trump administration is setting a dangerous precedent by selling weapons without congressional approval. Congress has the sole constitutional authority to declare war and it has been a longstanding practice that Congress has a role in approving or blocking overseas arms sales. Congress can — and must — stand up to the administration before it’s too late.

Saudi Arabia already spends more per capita on weapons than any country and we see how they use them to kill innocent children. And now, with Pompeo and Bolton threatening war with Iran, a regional rival of the Saudis, selling more weapons to the Saudis will also escalate the seething tensions between the U.S. and Iran. This massive arms sale will lead to even more regional instability and a possible war with Iran. We must hold the line for peace with Iran, sending Saudis more bombs is fuel on a fire that Bolton wants to combust.

We cannot let the administration use false threats of an Iranian military to continue to fuel the world’s worst humanitarian crisis in Yemen and create a new war. Tell Congress to ban weapon sales to Saudi Arabia in the 2020 National Defense Authorization Act.

P.S. CODEPINK is travelling to Iran in the fall. Email Lily for more information.