Rally at State Department Calling for Sanctions Against Saudi Arabia 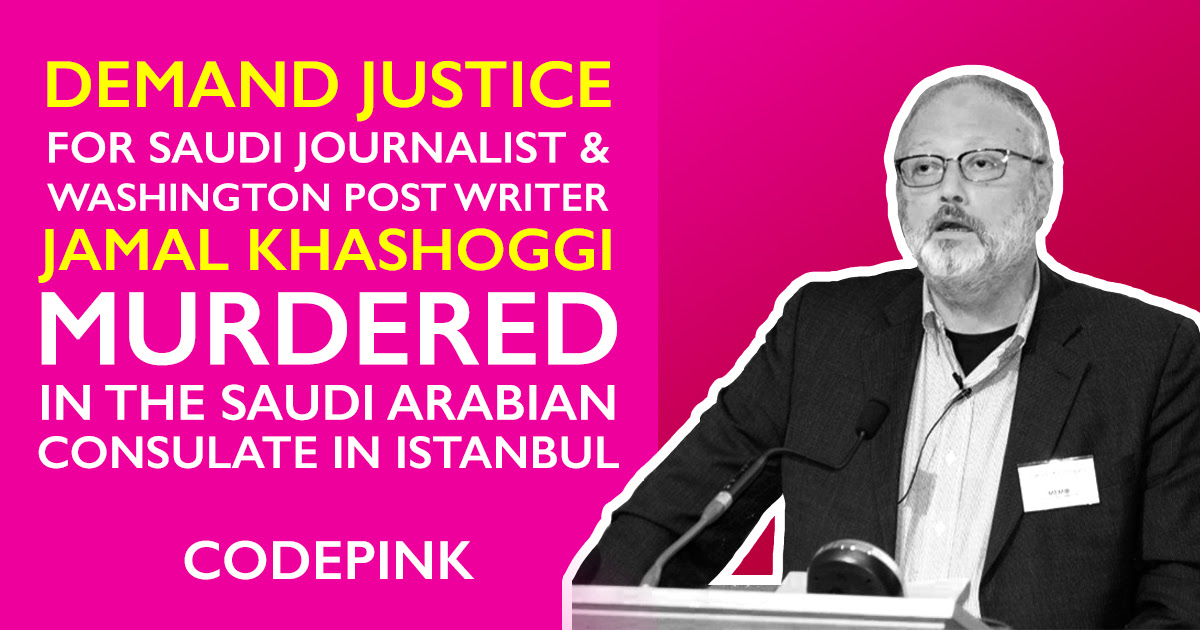 Rally at State Department Calling for Sanctions Against Saudi Arabia

Washington DC:  Activists with gather at the White House and then march to the State Department to turn in thousands of signatures on a petition calling on the Trump administration to take action against the Saudi government. “No country that murders journalists, commits egregious human rights abuses domestically and is bombing civilians every day in Yemen should receive special status and friendship from the U.S. You must demand answers and hold Saudi Arabia accountable,” says the petition.

With the world horrified at reports that the Saudi government tortured and dismembered Washington Post journalist Jamal Khashoggi, President Trump is down-playing this tragedy and Secretary of State Mike Pompeo was pictured smiling and shaking hands with both King Salman and Crown Prince Mohammad Bin Salman (MBS) in Riyadh this week. “It’s disgusting for Secretary of State Pompeo to be cozying up to murderers. Instead, Pompeo, along with President Trump, should be expressing outrage at this barbarous act and implementing appropriate responses, including cutting weapons sales and imposing sanctions on those involved, including the top leadership,” said Medea Benjamin CODEPINK cofounder and author of “Kingdom of the Unjust: Behind the US Saudi Connection.

“As a former U.S. diplomat, I call on my former colleagues to speak honestly about the abominable human rights record of the Saudi government and particularly about the latest and cruelest violation—the beheading and dismemberment of journalist Kamal Khashoggi while he was alive in the Saudi consulate in Istanbul,” said retired Colonel Ann Wright. “Profits to US weapons dealers for the sale of U.S. weapons to Saudi Arabia cannot outweigh the importance of calling out criminal acts by governments. To be silent on human rights violations while protecting US weapons manufacturers will haunt U.S foreign policy for decades.”

We will have petitions to deliver and will read some of Jamal Khashoggi's writings. We will be wearing masks of Khashoggi and have someone dressed as MBS with bloody hands and a bone saw.