Presentation by Jodie Evans to No Cold War Conference September 26, 2020 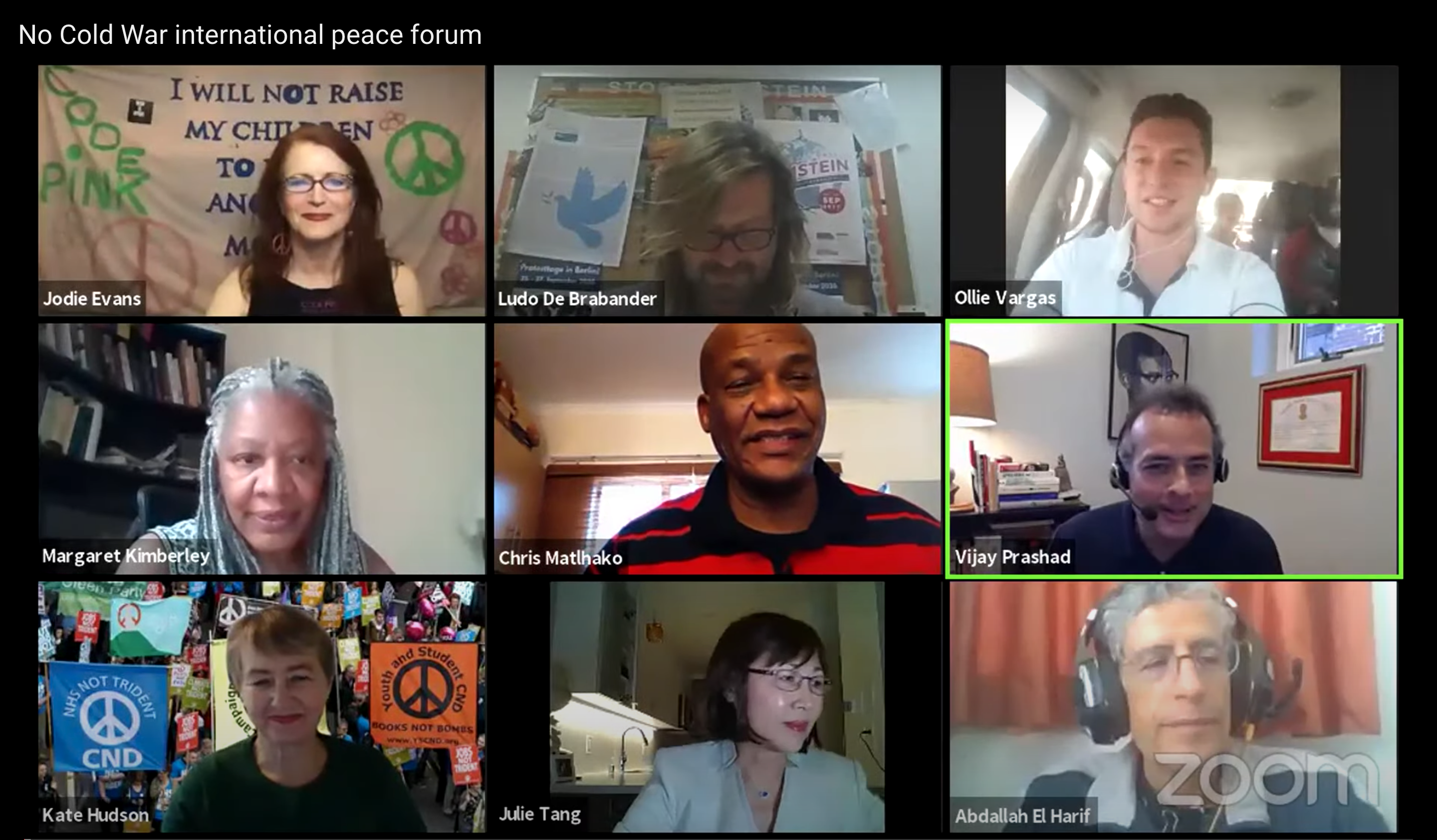 (The delivered words were edited down from this to 8 minutes)

Good morning, I am coming to you from Tongva land on the west coast of the United States.  A country of increasing homelessness and poverty; where 4% of the world has suffered from 20% of Covid deaths; where the effects of climate change, fires, floods and hurricanes have rendered many more climate refugees; where women in Immigration detention camps have had their uterus removed against their will; where the streets of major cities are full of protests calling for justice for over 100 days since the murder of George Floyd and where 90,000 are in solitary confinement in US prisons which is globally recognized as torture, I could go on and on…

But I want to first thank Vijay for hosting us today and for all he has done for peace with his life and his words and for the No Cold War Coalition for inviting me to join this panel of global voices, for whom I have the deepest respect.

In 1968 I watched as friends were brought home in caskets from the Vietnam war and witnessed the horrific photographs of napalm burns on the bodies of Vietnamese children and have been an anti-war and anti-nuclear activist since.

Of course, I say with you, No Cold War on China. But the US has already begun a hybrid war on China in multiple ways. Which includes dangerous military threats and provocations in Taiwan and the South China Sea.

The US has attacked 80 countries overtly or covertly since WW2.  In these countries the narrative is clear; declare them a dangerous enemy and build a case through the US media that makes that false case the accepted narrative.

US exceptionalism allows the US elite the assigned moral right to murder another, despite the complete absence of an existential threat on the American people.  In the cold war with Russia, the deceptive narrative was one of imminent attack, thus heightening the nuclear arms race and monies that belonged to the people to fight hunger and poverty were used to line the pockets of the death merchants of the military-industrial complex.

Consequently, US attacks on China are the same pattern of western exceptionalism and the joint US/European imperialist project of the last 400 years.  These 400 years include the Belgian rape of the Congo, the hundreds of years of slave trading, the murder of over 10 million Vietnamese, Laosian, Cambodian, Korean, Filipinos and Indonesians, the genocide of the indigenous of the Americas, and 180 years of war against the people of Afghanistan, that began in 1839.  Whatever they want, the US will attempt to take it at any means necessary. If it is not behaving as they dictate, the US will destroy it.  History cannot forgive or forget the deaths of 30 million Russians and 20 million Chinese in wars instigated and led by imperialist powers. Or the dropping of the first and only nuclear weapons on Japan, causing the death of over 200,000.  The death toll and misery over these 400 years is immense, incalculable, and immoral. Consequently, all peaceful citizens are united to curtail all cold and hot wars.

Why is the US pushing so hard for war with China?

First, this didn’t just begin with Covid, or with the arrest of Meng Wanjoy the CFO of Waway.  This current effort begins with Obama’s attempts to tilt toward the pacific in creating the Trans-Pacific Partnership, which was an attempt to isolate China from global trade. Obama was attempting to undermine the Belt and Road initiative which was a powerful economic project to increase trade.

Today the US elite are obviously terrified at the tremendous economic success of China.  China is the world’s leader in solar power, wind power, water power, manufacturing and 5G technology.  During the last 70 years, China has educated its people, taken 800 million people out of poverty without invading other countries or enslaving other people. In contrast, the US’s poverty rates continue to climb and if you listen to Reverend Barber of the Poor People’s Campaign, 50% of US citizens are at the edge of poverty.

There is a section of US capital that resents Chinas’ leapfrogging, especially in the areas of technology. We see this in the US’s forced sale of TikTok and the attempt to close We Chat, which are the continuation of piracy and plunder when it suits the western powers. It is that same pattern of plunder in which the British forced China to purchase opium.

It is incredible that the NY Times and the western media discuss the so-called spying of Chinese tech firms, but are silent about the thorough Snowden revelations that it is Google, Twitter and Facebook who work with the US government, to spy on billions of people in the world.  The US tech sector is deeply wedded to the US military-intelligence complex and it is they who represent a grave threat to all of humanity.

China is not threatening the US militarily.  China has one base abroad compared to 800 of the United States. China has not built up an offensive military power. China beginning in the 1400s has not sought to be a maritime power. Its strategy has been defensive; it was the Japanese who invaded China and it was the Americans who invaded Korea. In 2019, China spent 261 billion on its military. The US and its military allies spent 1.1 trillion,  an amount 4 times greater. Yet it is historically understandable why China would not accept another colonial conquest of its lands.

China’s success stands in the way of US domination of the world.  Sections of US capital and the deep state sadly have concluded that this makes China an existential threat.

In the character of being a bully, the US falsely inverts reality and claims to be the victim; when it is clear to all that they are in fact the perpetrator of abuse. It is not accidental that the US, Britain, India and Brazil are examples of abject failures to protect their citizens from Covid19.  It is another example that these are the regimes that subject humanity to abuse.

In 2003 my partner in CODEPINK, Medea Benjamin and I drove across the desert from Amman Jordan to Iraq, just before the US invasion. Our question then was; why is the US government launching this war???

There were obviously no weapons of mass destruction; Iraq had been crippled by US sanctions. Despite that, the Bush Administration with the assistance of the US media was able to drive a narrative that frightened the American people, Congress, and the Senate to go to war.  Even as we and others warned the American people every day, all day, outside the White House and in Congress of the dire and inhuman consequences. That war was irrational. There was also a madman, Dick Cheney in the White House, similar to the mad man there now; Secretary Pompeo. Ultimately the people of Iraq and Libya who had wanted to take their oil off the US dollar were massively punished.

After we failed to stop the war on Iraq, even as 20,000,000 of us marched globally, I reflected on what I would have done differently.  Even though I was working 24/7 for peace, there was a part of me that thought going to war with Iraq was impossible, it was insane, immoral, unconstitutional, not approved by the UN.  But it happened.

So I vowed never to underestimate the depravity of those in power in the United States. The USA has always been based on the power of a white ruling elite. Its history begins with what is called the original sin – the genocide of the indigenous and the enslavement of the African.  It is a power that has never been held to account for its crimes, shown remorse or acknowledged the insidious damage to life it has caused; literally the blood on its hands.

But Nuclear war is an unacceptable outcome.

The American peace movement has a tremendous responsibility to the world to undermine the threat to peace posed by the American empire. This task requires us to carefully identify all sections of the American people who are and can be mobilized against this. We are already collectively working to enlist academics, students, Chinese/Americans, Unions, university presidents, sections of American business community, and more to undermine the narratives that are being driven and to create a much larger movement to stand in the way of this irresponsible drive to war.  We will have to adopt excellent tactics to offset the propaganda. What is needed is a massive education of the world to understand the reality of China.  I have been to Iran, North Korea, Cuba and China. It is the people’s narratives that must be told; their stories change the hearts and minds that have been coerced by the constant lies intended to yet again frighten the American people into agreeing to war.

Despite US hegemony, George Floyds’ death brought 10’s of millions of young people in the streets standing against police violence.  The recent fires are apocalyptic reminders of the US ignoring the climate crisis.  We have before us the task to unite all levels of society not on an ideological basis but on a human basis to resist.

We have to take this so seriously and as peace activists work globally to call out other leaders to step up and speak up. Fear shuts down good people. So it is our courage to speak out early, to make the space safe, to take on the early accusations of all that will be thrown at us. We cannot be thrown on our heels in defense but stand boldly in the offensive of cooperation, of diplomacy, of a future for humanity, of PEACE.

We have to disrupt the narrative Trump is driving as he calls on generations of conditioning with his dog-whistle tactics of the Yellow Peril and the Red Scare and write our own beautiful narratives.

War is never the answer. Nuclear weapons are a crime against humanity and anyone playing with that fire needs a time out.

Who polices the ones that call themselves the police of the world? We The People, the global collective of humanity to which this violence has already been unleashed in acts of war that take place every day.  We need cooperation not confrontation.  We need Peace if there is going to be a future on this planet.

Thank you for being here, for your commitment to peace and for laying this groundwork for the global movement we need for cooperation and Peace.

Note: Jodie Evans and some of the other speakers were quoted from this No Cold War International Peace Forum in the China Daily.  You can watch the conversation in its entirety here.