War Criminal of the Week: Dick Cheney
by Nancy Mancias

Former Vice President Dick Cheney has long been one of the most influential architects of Bush's invasion of Iraq. He has been quoted as saying U.S. troops would be "greeted as liberators." Years have passed since that pre-invasion quote, the country of Iraq is completely unstable, approximately 300,000 Iraqis and more than 4,000 US military personnel are dead. Innocent Iraqis were tortured and humiliated at Abu Ghraib prison while over a hundred prisoners still remain in jail at Guantanamo Bay, Cuba. What's even more outrageous is Cheney was the former CEO of Halliburton. The Wall Street Journal had reported that Halliburton officials met informally with representatives of Vice President Cheney's office back in October 2002 to figure out how best to jumpstart Iraq's oil industry following a war. Cheney and Halliburton denied it. In January 2004, the Army awards Halliburton subsidiary KBR a contract worth up to $1.2 billion to rebuild the oil industry in southern Iraq.

During the 2004 Republican National Convention in New York City, activists from across the country wearing pig snouts protested Halliburton outside a Manhattan hotel targeting a company sponsored breakfast for the Texas Republican Party delegates. 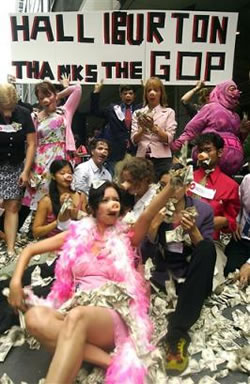 (Little did the media know that the breakfast was made up by the creative activists.)

Dick Cheney and Halliburton manage to continue to cause more harm than good with the development of a drilling technique called "fracking,” a method of injecting large amounts of water to fracturing rock formation that has been linked to water contamination.

Even though Cheney is laid up in a hospital recovering from heart surgery, the thousands of innocent lives suffered from his choices as CEO of Halliburton and U.S. Vice President under George W. Bush will most likely never recover.