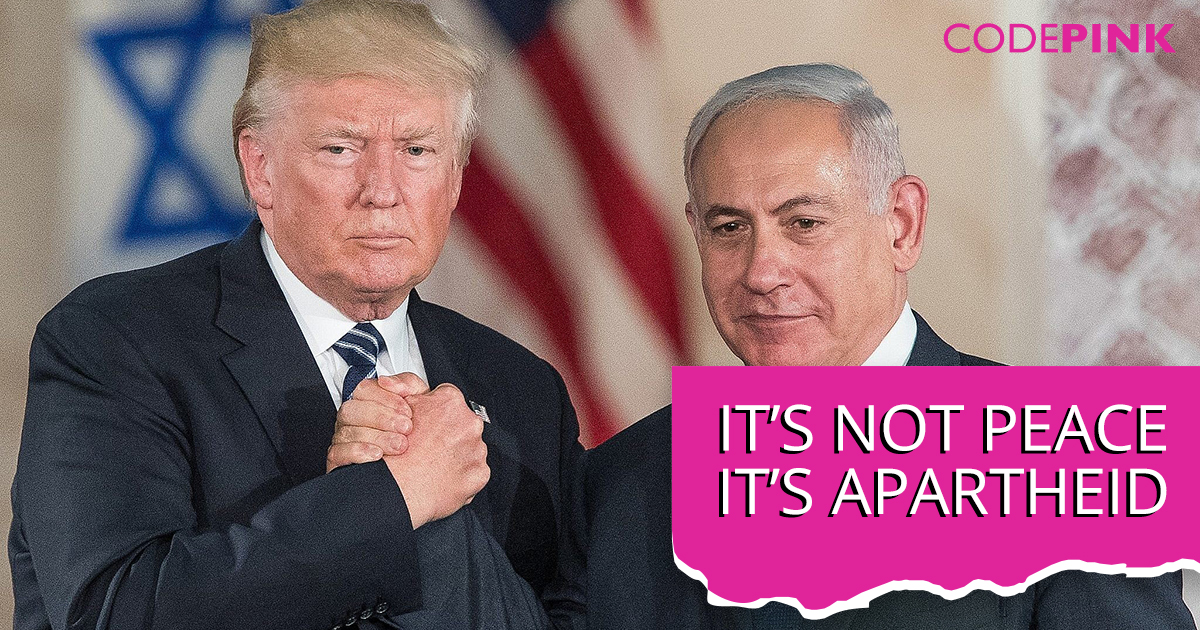 The release of President Donald Trump’s long-delayed Israeli-Palestinian “peace plan” took place yesterday during a joint Trump-Netanyahu press conference. All the Israeli apartheid deniers, from Sheldon Adelson to Jared Kusher to mayors of the West Bank settlements, were in the room as Trump and Netanyahu gleefully announced a plan for even deeper repression of Palestinian rights. It has blown open the door for Israel to complete its theft of the West Bank. Congress must act immediately.

Contact your senators and representative right now and tell them to follow in the footsteps of Senators Sanders and Warren and Congressional Progressive Caucus chair Rep. Mark Pocan in issuing a strong rebuke, rejecting this assault on Palestinian rights.

Trump’s reference to his plan as feasible is absurd and insulting. Palestinians had no say in the process. They rejected the plan in advance and have made clear that their rights, dignity, and lands are not for sale.

Even though the plan is dead on arrival, it is extremely dangerous. It calls for:

As Rep. Mark Pocan said on Twitter: “A peace plan without Palestinian voices is no plan at all. It's a unilateral attempt to continue on a path towards instability in the Middle East, led by @realDonaldTrump and @netanyahu. Any plan must center freedom for both Palestinians & Israelis. Anything less is injustice.”

Trump said the Palestinians will be forced to accept the deal whether they like it or not, and Netanyahu has pledged to move forward with immediate annexation of the West Bank settlements and the Jordan Valley. Netanyahu’s cabinet could meet as soon as next Sunday to begin this. We must act now.

Contact Congress and tell them they must reject Trump and Netanyahu’s peace sham.