PEACE CAMP 2017: A Revelation of Love 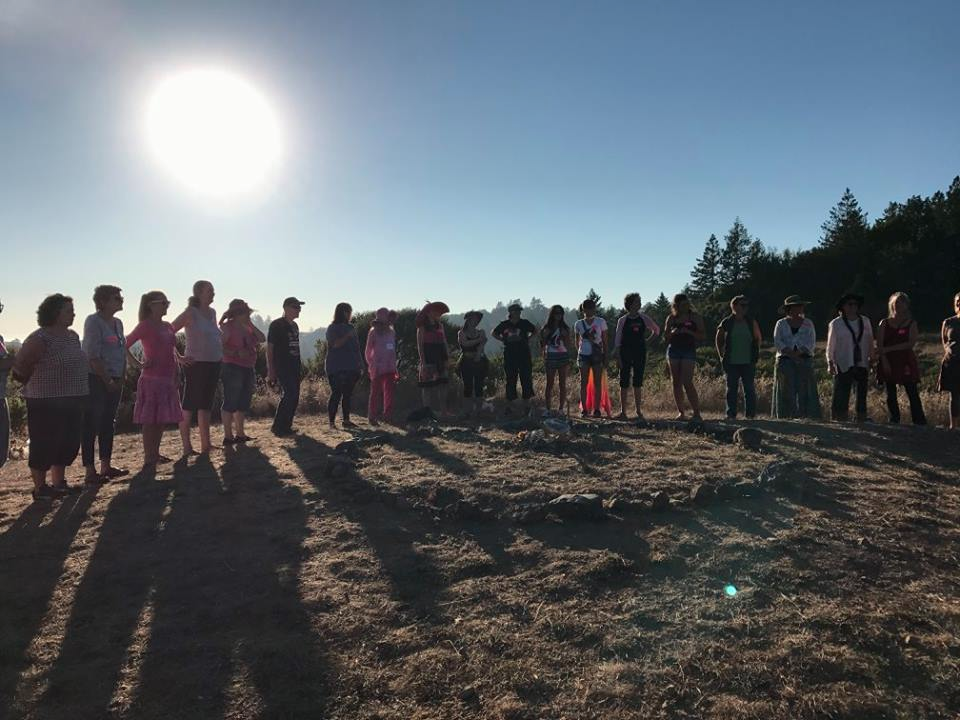 If you weren’t one of the hundred or so women—and dozen-plus men— who came to CODEPINK’s Peace Camp the last weekend of August, you’re going to want to mark your calendar for next year. This was my first Peace Camp. I had no expectations beyond what was advertised: a weekend of healing, storytelling, teach-ins, skill-sharing, coalition building, camping, singing and dancing under the stars in breathtaking Sonoma County. Maybe it was because I had no expectations that what I had was a revelation.

The sun had left by the time we got to Ocean Song, http://www.oceansong.org/ a two-hundred-acre-plus retreat and educational center in the rolling coastal hills of northern California. Peace Camp was officially starting early Saturday morning, so a handful of us came the night before to set up. We quickly carried in our gear and laid out bedrolls and sleeping bags, and then Jodie Evans ushered us outside, saying, “You’re going to want to see this.” A curtain of stars shimmered and glimmered in the sky, skirting the horizon, as if life herself had turned on the lights.

The first day was women-only, and it created the safest, kindest, sweetest, and calmest field of community I’ve ever experienced. So much so that even when things got challenging, during Paula Kahn’s workshop on white privilege and colonialism, even then, as difficult truths were spoken, contrasting perceptions shared, and gentle corrections offered, there was a palpable sense of kindness and respect. We went to a hard, hard place with soft, soft hearts. And in that moment, and every moment thereafter, I saw that there is another way.

One of the gifts of Peace Camp is an immersion in the internal work associated with the Local Peace Economy (LPE). http://www.codepink.org/peaceeconomy  People talk about a revolution of values, a Revolution of Love, and how we should do it, but I’ve never actually seen it done; never been immersed in it.  It is so radically different from the order of the day; this putting the head in service to the heart. What I saw, what I felt, what I know, is that this is the way to creating the world we want. By being it even as we are actively engaged in the becoming of it and in the building of it.

I caught a glimpse of that world at Peace Camp. It is a world that loves and honors and works for all of us, a connected, caring, responsible, participatory, truthful, safe, peaceful, sustainable world. A kind world; a Pink world. Because what we’re doing isn’t do-able anymore; it never really was. And yes, we talked about that, but we didn’t just sit in the problem.

Solutions were presented; we learned about specific actions to take in our own homes and communities, like creating a Local Peace Economy and participating in the new Campaign to Divest From the War Machine. http://www.codepink.org/divest  CP’s Haley Pederson presented campaign particulars, including the Divest From the War Machine Summit in Washington, DC, on October 21-22. http://www.codepink.org/divest_launch

After Haley, we heard from several more speakers. We heard from Medea Benjamin, and the unsinkable Ann Wright (Women’s Boat to Gaza, anyone?), and then we heard from Medea again when she led the evening talent show and sing-a-long. We danced; we ate gorgeous, organic food that was prepared with so much grace that it fed us body, mind, and soul. But the spirit of the camp spoke loudest when dozens and dozens of us followed a well-worn dirt path, single file, through field grass and wildflowers to the top of a gentle mound with a circle of stones in the middle. Several women took turns leading songs of peace and resistance, courage and love as we linked arms and joined hearts. Moving together, we wove a living labyrinth and found ourselves at the center.

Next year, I hope you’ll meet us there.

Stacy Bannerman is the author of Homefront 911 https://www.amazon.com/Homefront-911-Families-Veterans-Wounded/dp/1628725699 and testified at CODEPINK’s People’s Tribunal on the Iraq War in Washington, DC.