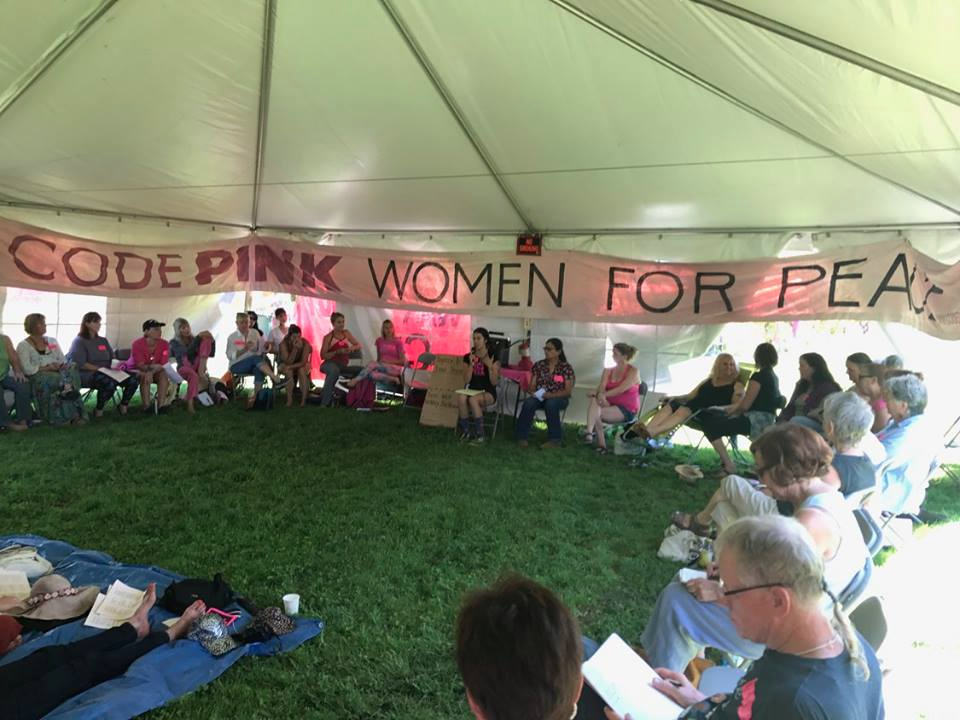 I was moved upon receiving enthusiastic feedback for the “Decolonizing Organizing” session at CODEPINK’s Sonoma Peace Camp 2017. Some asked if I could share notes & resources for people to continue their path of learning. Below are some resources to get you started!

Our efforts to seek justice and accountability for war crimes and corruption are undermined if we do not address the origin of the U.S.-dominated global war economy; we must return to confronting the colonization of the Americas and initiate a journey of self-reflection and self-examination over how our minds, bodies, and spirits have been impacted by a festering wound in the social fabric. If we deny, ignore, and fail to recognize this turning point in civilization that has not been reconciled, we will fail to build a holistic, comprehensive peace/demilitarization movement that is intersectional, or addresses interdependent systems of discrimination and disadvantage across overlapping social categorizations (race, gender, age, ability, sexual orientation). When Trump was announced as 45th on November 6th and when Heather Heyer was murdered in Charlottesville shock swept through some masses of people while masses of other people weren’t shocked at all. The United States and all of its institutions were fabricated through the legitimization, the systemic legalization of genocide and we find ourselves in the current human condition because those who have benefited from the colonial hierarchy have not faced the same kind of urgency to survive that indigenous, black people, migrants, people of color, queer, trans, sex workers, differently-abled, cash poor, or house less people do. A couple of participants at the retreat did not feel comfortable when I used the term “White Supremacy” to describe neo-colonialism. It was interpreted as an attack on white people. Fortunately, this white discomfort with “white supremacy” catalyzed a really beautiful process of collectively unpacking the relationship between colonialism, white supremacy, white privilege, and accountability. In the most loving way, I communicated my agreement to disagree and proceeded to point out that “White Supremacy” was a necessary term to use because it is the legacy of colonial hierarchies that produced the white privilege of ignoring racism as an urgent matter. The luxury of not having to address what for others’ is an urgent matter of survival is all the more reason why we must recognize and name White Supremacy as a crisis that has been ongoing since colonization began. As someone who is mixed and is white and latinx, it is a time for deep reflection and accountability. We have all benefited from White Supremacy at some capacity and we are lovingly and compassionately going to support each other in undoing and unlearning the harm we were socialized to normalize.

Sure, it was a teeny bit uncomfortable for a second - colonialism and its most current manifestation can be an awkward thing to confront collectively-  but it MUST be done. As one participant said, it is the very reaction of defensiveness to the term White Supremacy that we must lean in the discomfort that comes us; we should lean in on our own instincts to become defensive. For it is colonialism that facilitated the development of a war economy. Colonial culture is the war economy. The just transition from the war economy to local peace economies is a process of decolonizing the mind, body, spirit individually and collectively. It is a transformation of our values and behaviors. It means actively defying the hierarchy created during colonization of the Americas. Are you ready to share your resources? Are you ready to create platforms for those most impacted from state violence? We have the opportunity to be legendary in leaving something for our descendants to continue thriving off of!

During our decolonizing organizing session, we also distinguished allies from accomplices. Are you an ally or an accomplice? An ally is someone who aligns themselves with social justice values, educates themselves to support members of targeted identities better, reads womxn of color’s writings. However, we are beyond these standards now. People of color, trans people, people of different abilities, sex workers, undocumented people, who are on the front lines of risk and danger from state violence, need accomplices, those who are willing to escalate risk taking to protect those who are on the front lines by default. When laws are violent by default it becomes our duty to defy and obstruct their enforcement. Will you join me in obstructing ICE from taking someone into custody for detention and/or deportation?  Accomplices recognize the colonial nature of the apparatus of law and therefore commit to violating laws that target, laws that separate, laws that exterminate. Below are some resources for independent studies! I highly recommend sitting with the grief that comes up when reflecting on the disparity that keeps us divided. Write about your process. Journal away and explore past experiences that have shaped how you’ve been socialized. Research the key terms below and explore your relationship to each term. Remember, colonization operated on the strategy of divide and conquer. We are employing our agency to heal ourselves from the damage that was done! Thank you for taking the time to read this. Peace Love Unity Respect

Your go to website on resources for learning about contemporary intersectional feminism:

Pedagogy of the Decolonizing- Quetzala Carson

-Decolonization- a process of undoing the