Over 900 Faith Leaders Call for a Christmas Truce in Ukraine 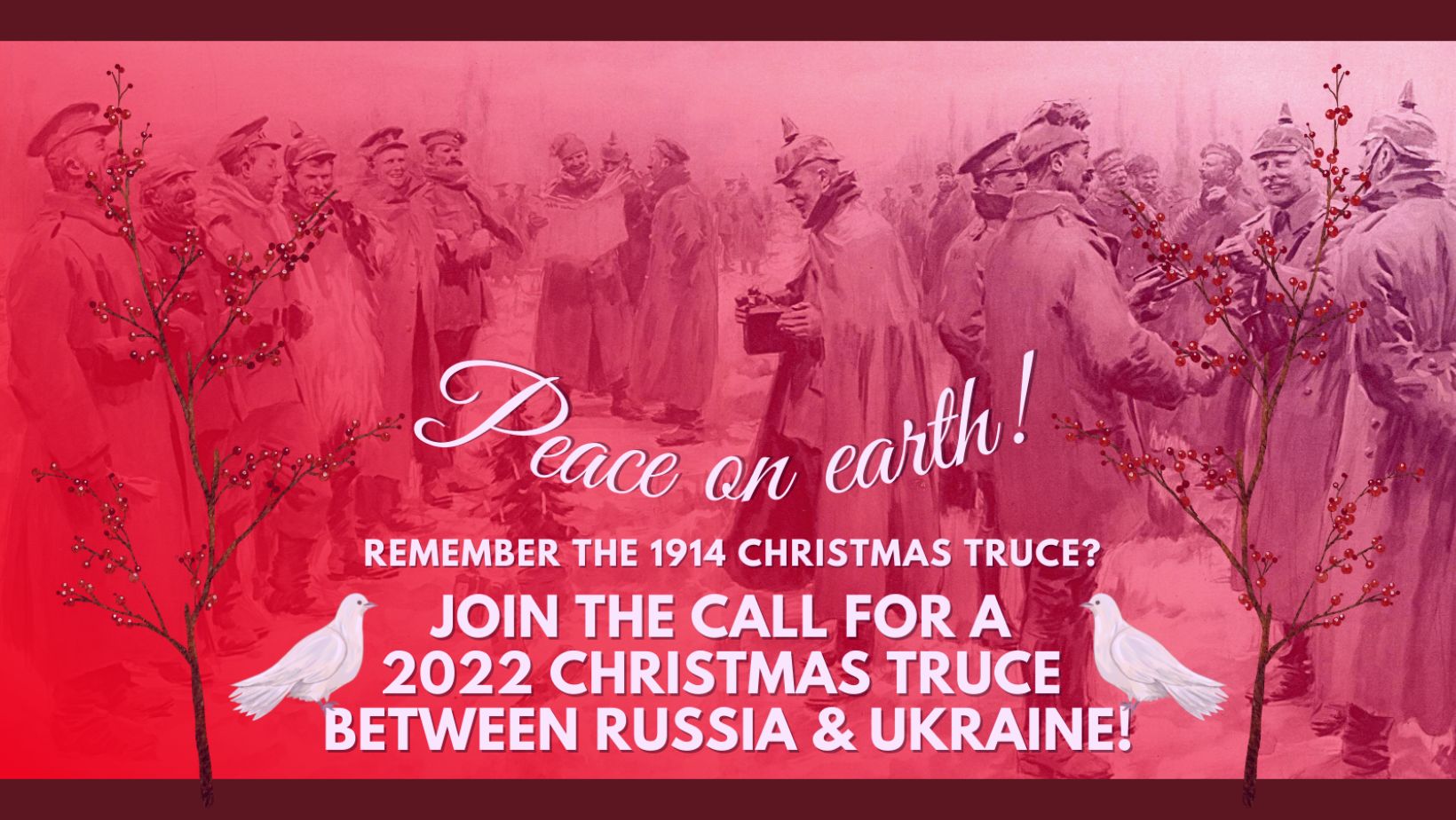 Inspired by the miraculous Christmas truce of 1914, leaders petition the Biden administration to push for negotiations

FOR IMMEDIATE RELEASE: A diverse and quickly growing coalition of nearly 1000 faith leaders in the United States–representing a massive number of believers from every major tradition–have signed onto a Christmas Truce statement demanding a temporary ceasefire in the War in Ukraine.

Spiritual leaders from across the spectrum of faith communities and a diversity of ideological perspectives have become signatories in recognition of the fact that the way out of the war in Ukraine will not be a military solution. They have signed on with the belief that a temporary ceasefire offers an opportunity for moral clarity that could be the first step toward a negotiated peace.

“As the war in Ukraine drags into to its 10th month, the only certainty is that the estimated hundreds of thousands killed and wounded will continue to grow, as will the 14 million war refugees not to mention the humanitarian impacts felt across Europe and the globe” said Ariel Gold, executive director of the Fellowship of Reconciliation USA, the oldest interfaith peace organization in the United States.

“Negotiation is not a euphemism for capitulation, nor is it a rationalization of Putin’s aggression,” said Medea Benjamin, cofounder of the peace group CODEPINK. “It is simply a recognition that the end of this war cannot be achieved by more war. Any prospect for a pause in hostilities should be acted on.”

Initiated by the Fellowship of Reconciliation, USA, the National Council of Elders, CODEPINK and the Peace in Ukraine Coalition, the Christmas truce for Ukraine, is inspired by the miraculous Christmas truce of 1914, in which 100,000 German and British soldiers ceased fire and participated in a brief and spontaneous peace along the Western Front. Emerging from their trenches, soldiers ventured into the “no man’s land” where they shared food and drink; they sang Christmas carols and even played soccer together. It was a potent example of how the human spirit can be a powerful force that transcends hate and division in the promotion of peace.

The signers of the statement hope to meet with and petition the Biden administration to ask them to take a leadership role in pushing for a negotiated settlement that brings the war to an end, greatly lessening the danger of nuclear war and mass, if not total, annihilation. The statement reads:

“As people of faith and conscience, believing in the sanctity of all life on this planet, we call for a Christmas Truce in Ukraine. In the spirit of the truce that occurred in 1914 during the First World War, we urge our government to take a leadership role in bringing the war in Ukraine to an end through supporting calls for a ceasefire and negotiated settlement, before the conflict results in a nuclear war that could devastate the world’s ecosystems and annihilate all of God’s creation.”

Campaign organizers will also be rolling out online resources (forusa.org/ukrainemedia) that houses of worship and community groups nationwide can access to promote this prayer for peace and encourage grassroots promotion of the need to cease the violence and pursue a negotiated settlement.

“Whether it’s Christians around the world preparing for Christmas or Jews getting ready to celebrate the commemoration of the miracle of Hanukkah, all of the Abrahamic faiths embrace the prophetic voice of Isaiah who exhorted us to transform swords into plowshares,” said Zoharah Simmons from the National Council of Elders. “As we enter this winter holiday filled with prayers for peace and liberation, we are praying and acting for the same kind of miracle that over a century ago compelled the soldiers of WWI to put down their weapons and celebrate peace.”