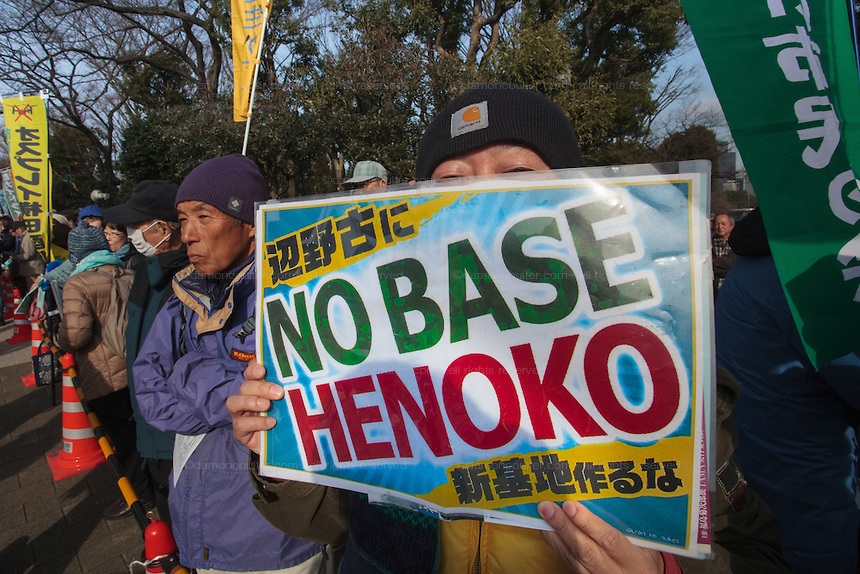 Crimes against Okinawans by U.S. military personnel — including sexual crimes and the recent murder of a young woman — and damage caused to the environment by the presence of U.S. military bases have been occurring for over 70 years. The U.S. has had a presence in Okinawa since the end of WWII and currently 33 U.S. military facilities and about 28,000 U.S. military personnel remain on the island. CODEPINKers in Japan, joined by Ann Wright, have protested the continuing U.S. military occupation of Okinawa; CODEPINK in DC has also recently held an action against the construction of a new base there.

Urge President Obama to meet Governor Onaga and address the crimes of U.S. personnel in Okinawa and the need to shut down U.S. military bases.

Prime Minister Shinzo Abe hopes to use Henoko Bay, on the northeastern shore of Okinawa, to build a massive U.S. Marines base and a military port. Henoko, home to vibrant coral reefs, is filled with biodiversity and is the home habitat for the endangered dugong, a cousin to the manatees. The plan to close Futenma Air Base, which is located in densely populated area in exchange for the U.S. base in Henoko, has been delayed until the year 2025. According to General Robert B. Neller, commandant of the Marine Corps, the delays were “partly due to demonstrators and a lack of support by the government of Okinawa.”

Between 70-90% of Okinawans oppose the U.S. military bases on the island. For many years, Okinawans have non-violently protested to end the military colonization imposed on them. From entering live-fire military exercise zones to forming human chains around military bases, they have made clear that the continual growth of militarization by both the Japanese and U.S. governments is harmful, unjust, and must be stopped.

President Obama’s statement that he would not use the opportunity of his visit to Hiroshima to apologize for the atomic bombing of Japan is deeply upsetting. However, it is not too late to encourage him to honor the request of Governor Onaga to meet with him in person to talk about the destructive U.S. bases in Okinawa.

Click here to read reactions to Obama’s upcoming trip from our CODEPINK Japanese sisters. CODEPINK Japan has been active for about a decade, working for peace by protesting the re-militarization of the Japanese constitution; by attending international women’s peace conferences; through participating in International Women’s Day celebrations; by visiting the CODEPINK house in Washington, DC, and many other actions.

We honor their dedication, and ask you to send a message to President Obama asking him to meet with Governor Onaga.

P.S. Check out our new Stop Military Bases campaign page and get involved!