No More Fuel to the Fire! 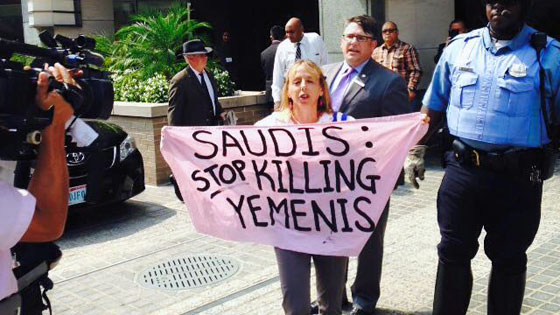 This week, the Saudi-led military coalition resumed its brutal bombing campaign in Yemen, killing 14 in a strike on a potato chip factory. The months-long bombing of Yemen by Saudi Arabia – using U.S.-made F-15s and munitions – has lead to a humanitarian crisis so bad that the U.N. calls it a “catastrophe.” With these brutal attacks resuming, why on Earth has the Obama administration approved ANOTHER $1.15 billion in weapons sales to the Saudis?

Send a letter to your Senator demanding that they block this outrageous sale of weapons to Saudi Arabia!

Selling more weapons and munitions to the Saudis – while they continue attacks on Yemen that have been called “war crimes” – is throwing fuel on a raging fire. Amnesty International and Human Rights Watch have both called on the U.S. to cut off the supply of weapons causing mass destruction in Yemen.

Congress can block the sale of these weapons, but they have only 30 days to do so after Monday, August 15th. Making matters worse, Congress is currently in the middle of a month-long recess, so they’ll have to take up legislation blocking the sale IMMEDIATELY after coming back from recess post-Labor Day weekend. We need to put maximum pressure on every member of Congress NOW if we’re going to succeed.

Contact your Senators NOW and demand that they block the sale of additional weapons to Saudi Arabia!

Thank you in advance for your commitment to peace.

P.S. Order Medea's new book, Kingdom of the Unjust: Behind the U.S.-Saudi Connection, on our online store and help support CODEPINK!