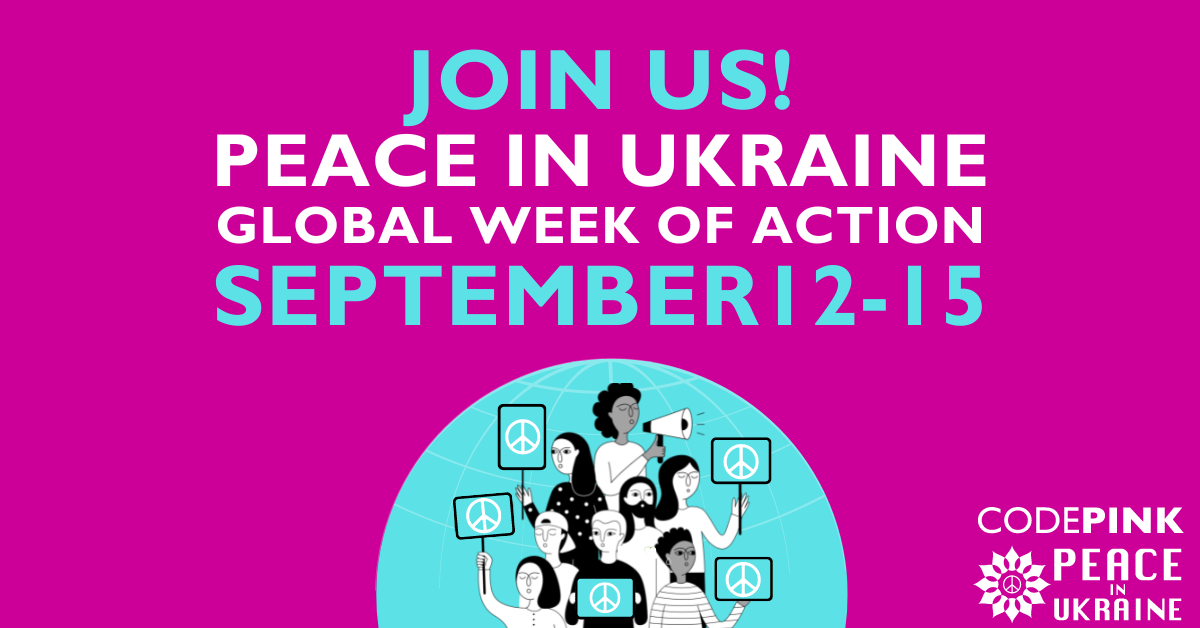 From DC and across the nation, CODEPINK & the Peace in Ukraine Coalition will rally inside and outside congressional offices to call for a ceasefire in Ukraine and investments in climate, not weapons to fuel endless war.

WASHINGTON: CODEPINK: Women for Peace, along with the Peace In Ukraine Coalition, will kick off a nationwide Week of Action Monday, September 12th, to demand a ceasefire in Ukraine, direct talks between the US and Russia and a freeze on weapons shipments to resolve a war in which the stakes have never been higher since the Cold War.

As the war on Ukraine enters its 7th month, the United States continues to escalate the conflict that threatens to kill thousands more Ukrainians and Russians, worsen global famine, further devastate the climate and push the two most heavily armed nuclear nations, the United States and Russia, to the brink of nuclear annihilation.

The launch for the week of action will be held at 1pm ET in front of the Cannon Building at Independence Way SE and New Jersey Ave SE. The action will feature CODEPINK co-founder, Medea Benjamin, and retired United States Army colonel and U.S. State Department official, Ann Wright.

“The White House and Congress are fueling this war with a steady stream of weapons instead of pushing for talks to end the conflict,” said Medea Benjamin. “That’s why we, the people, have to rise up with a demand of Negotiations, Not Escalation.” Benjamin, who has authored 10 books, is gearing up for a book tour for the release of her latest book, War in Ukraine: Making Sense of a Senseless Conflict, co-authored with Nicholas Davies.

Also speaking at the launch is Ann Wright, who resigned from her position with the State Department on the eve of the invasion of Iraq by the United States in 2003 stating that the invasion would be a violation of international law. Since then, she has been writing and speaking out for peace.

Rather than push for a protracted war, the White House and Congress should support a diplomatic solution along the lines of the MINSK II Peace Accord, signed by both Ukraine and Russia in 2015, to declare Ukraine a neutral non-NATO country and hold elections in the eastern region of Ukraine. Instead the US government has budgeted $40 billion to escalate the war with weapons, military equipment, troop training and intelligence, with zero accountability or oversight for taxpayer dollars. The same amount of money could have paid for 350,000 nurses or 400,000 elementary school teachers.