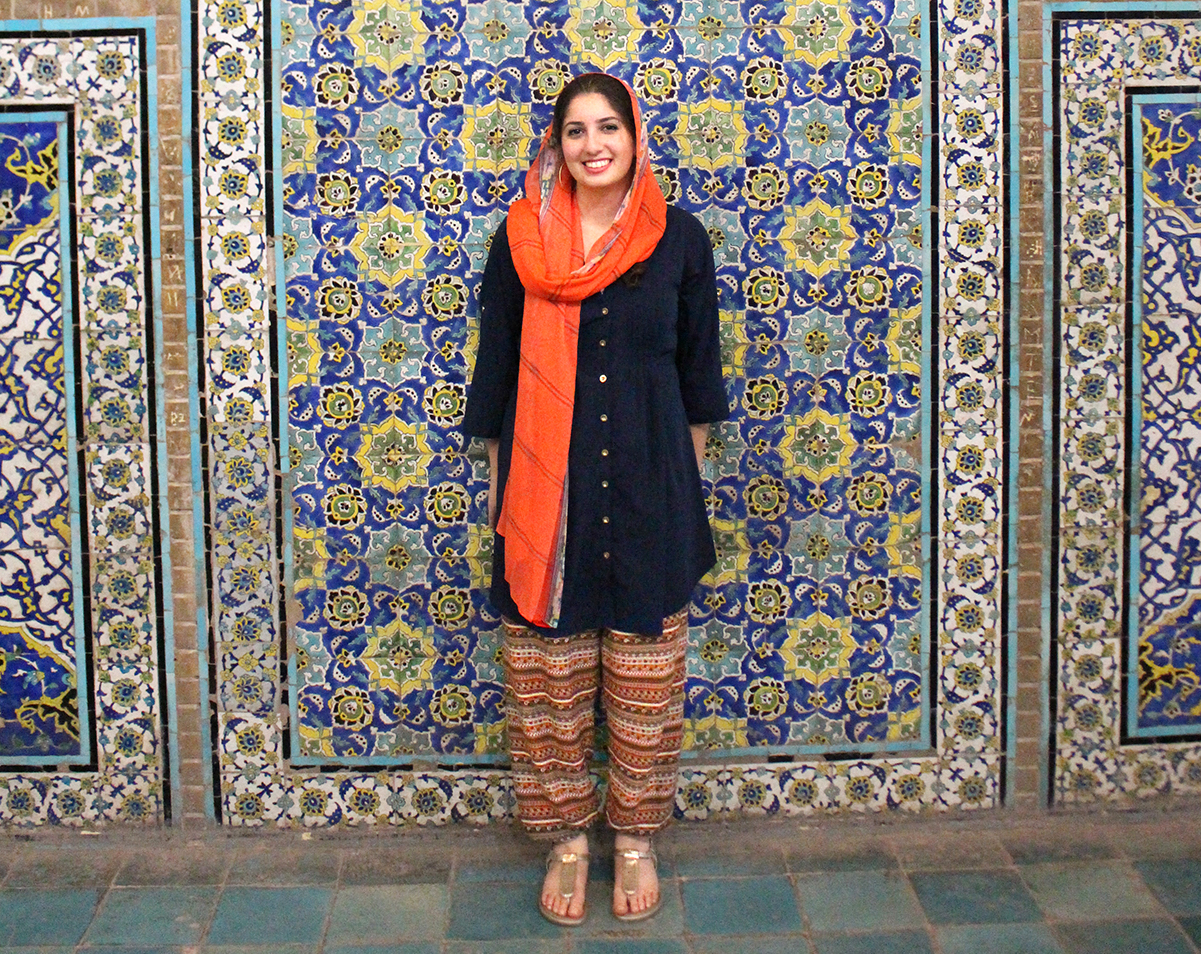 Throughout the past couple of weeks, I’ve sent you a few emails inviting you to CODEPINK’s Peace with Iran Summit on Saturday, Dec. 1st. I thought it was about time that I introduce myself and put a face to the emails: above is a picture of me in a mosque in Isfahan.

For me, this summit is personal. I’m a second generation Iranian-American and have lived the majority of my life with a constant battle with my hyphenated identity because of the U.S. and Iran’s complicated history.

The Iran nuclear deal was a ray of hope for Iranians living in Iran and in the diaspora. Iranians all over the world celebrated a new beginning of U.S.-Iran relations. All of this was short lived though, when Trump unilaterally withdrew from the nuclear deal and placed some of the harshest sanctions ever on Iran.

I travelled to Iran in June 2018 before the first round of sanctions. A dark shadow was cast over the country as the value of the rial was dropping every minute and shelves in pharmacies were growing more and more bare. Trump and Pompeo insist that these sanctions do not affect the people and will not impact food or medicine. They claim they want regime change to support the people in Iran, but the reality is right in front of you — they don’t want to support on the ground people’s movement in Iran, the U.S, Saudi Arabia, and Israel want Iran to crumble apart. I urge you to come out and attend this summit to learn for yourself the realities of the Trump administration’s policies on Iran that are destroying the lives of Iranians and separating loved ones from one another through the travel ban.

By attending the summit, you will be provided with the tools to stop the US from taking pages of the Iraq handbook to start a war with Iran and learn how you can build people-to-people relations with Iranians when the government and media fail to do so.

We know that in order to prevent a war, we have to educate and organize ourselves before it’s too late. There’s still time to register for the summit, but please sign-up now before space fills up.

If that hasn’t already convinced you to sign up, check out this sneak peek of the pop-up art exhibit curated by the Iranian cultural group Aftab Committee that will be at the summit! Come explore the unique and vibrant works of two Iranian-American artists Beeta Baghoolizadeh and Ala Hashemi.

To learn more about Iranian culture, CODEPINK has also added a spectacular post-summit evening cultural event at Busboys and Poets. We will close out the day with lovely poetry recitations, classical music by the renowned Iranian musician Nader Madj, dancing, open mic and much more.

I know you are super busy, but I would love to share this day with you. Make sure you register soon as space is limited.

P.S. If you can’t make it to the summit in person? Sign up to watch it via livestream