Summit on Peace With Iran 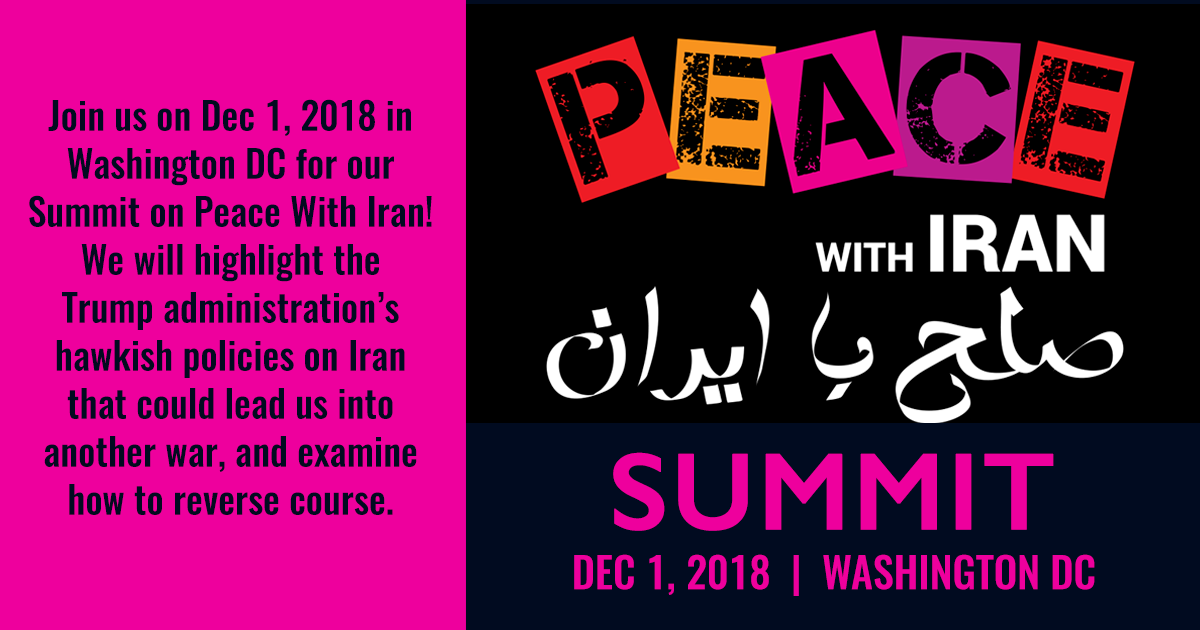 You can tune into the Peace with Iran Summit Livestream on https://www.facebook.com/codepinkalert/.

What: A Day-Long Summit on Peace With Iran

Why Do We Need a Summit on Iran?

The purpose of the Iran Summit is to highlight the Trump administration’s hawkish policies on Iran that could lead us into another war, and examine how to reverse course. We will also have a beautiful Iranian art exhibit provided by Aftab Committee, calligraphy, music, photo booth and other cultural activities.

The Summit comes at a time where tensions between U.S and Iran are escalating. The reimposition of sanctions following the US withdrawal from the Iran nuclear deal is causing tremendous hardship for the Iranian people. The Trump administration’s Muslim travel ban is making it difficult for Iranians to travel to the United States, separating thousands of families.

Adding to this uncertainty are terrorist attacks, human rights violations and a strengthening of conservative forces inside Iran, proxy wars raging in the region, and an increased threat of direct confrontation with the United States, Israel and/or Saudi Arabia.

Here in the United States, the Trump administration is building a case for war. We’ve seen it all before with Iraq—high officials distorting information to push their own hawkish agenda that only inflicts pain on the people, not the government. The Summit will bring together experts and activists to examine ways we can support Iranian civil society, push the US media to do a better job covering this crisis, and pressure Congress for a “no sanctions, no war” agenda.

Join us after the summit at Busboys and Poets for An Evening to Celebrate Iranian Culture. We will have poetry recitations, music, dancing, open mic and much more.

Moderated by: Niki Akhavan, Associated Professor and Chair of Department of Media and Communications Studies, The Catholic University of America

1:30pm-2:20pm Session V: Iran’s role in the region: Is it the number one state sponsor of terrorism?

Moderated by: Ann Wright, retired US army colonel and US State Department Official