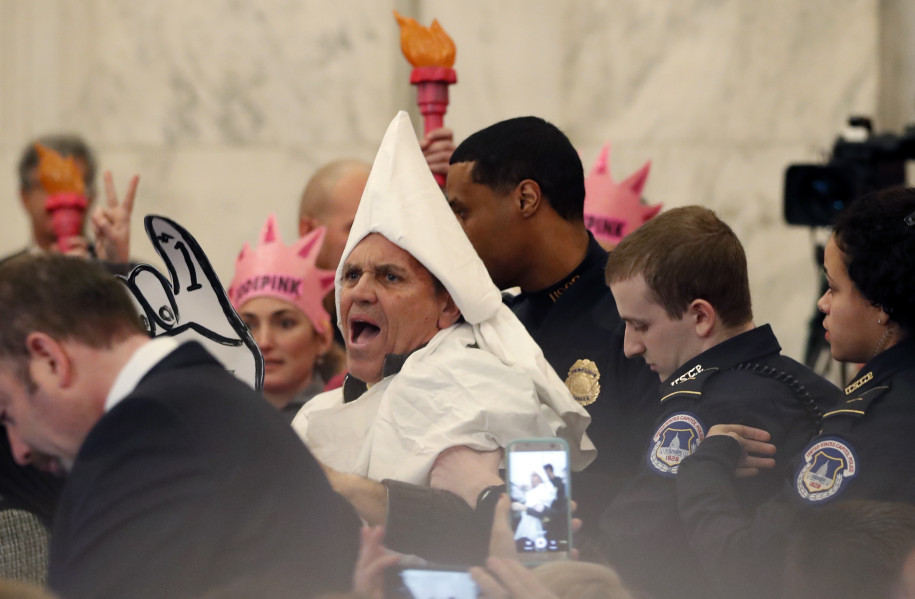 Washington DC - Dressed as Lady Liberty and members of the Klu Klux Klan, three members of the peace group CODEPINK, along with a number of other activists, were arrested at the beginning of the judiciary confirmation for Jeff Sessions. As Sessions walked into the room Tighe Barry and Lenny Bianchi, both dressed in white sheets and pointy hats stood up and voiced mock support for Sessions as KKK members.

“We got arrested posing as Klu Klux Klan members and yelling out our support for Sessions, but the sad reality is that Trump and his cabinet picks are emboldening the most racist people in this nation,” said Tighe Barry.

Desiree Fairooz, draped in pink fabric and holding a torch, unfurled a banner which read "Support Civil Rights, Stop Sessions," was arrested after she laughed at Senator Shelby saying Sessions has a great record. She was dragged from her seat after she contested that she should not be arrested for laughing. As she was forced out of the room, she declared that Congress must not confirm Sessions.

Sessions has previously said that he is not a racist, but that groups such as the NAACP could be considered "un-American." In fact, it’s Sessions who supports "un-American" values. CODEPINK actions today echo the majority of the American people, who say #StopSessions, no racism, xenophobia, Islamophobia, and homophobia.