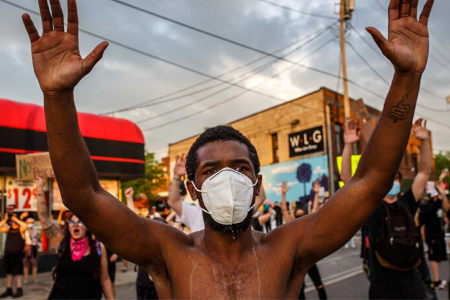 On May 29th, just following the murder of George Floyd, the city of Minneapolis looked like a war zone. Heavily armored military vehicles rolled down the streets, police lined up in riot gear, and drones buzzed overhead.

Did you know that the Minnesota State Board of Investments holds around 10,000 shares, worth a whopping $1.2 million, in Israel’s largest weapons company, Elbit Systems — the world’s largest exporter of drones?

Elbit has been involved in all of the major Israeli assaults in Gaza, contracts with the U.S. Department of Homeland Security for, among other things, a virtual surveillance wall at the U.S.-Mexico border, and markets its equipment to governments around the world as “battle-tested” (on the Palestinian civilians). Elbit drones constantly fly over Gaza, providing surveillance targeting for military assaults and Israeli snipers that hit peaceful protestors.

What are the odds that the drones over Minneapolis were Elbit drones, especially given that Metropolitan State University, located in the Minneapolis–St. Paul, metropolitan area, partners with Elbit on a state of the art cybersecurity training facility? A number of Democrats in Congress have written to the Department of Homeland Security Secretary Chad Wolf expressing “grave concern” over the use of drones over Minneapolis on May 29th to “surveil and intimidate” protestors. Support their letter by taking further action. Contact Gov. Walz right now and tell him to sever Minnesota’s government ties with Elbit Systems.

U.S.-Israeli military corporation partnerships are only part of the story. Thanks to the work of our partners at Jewish Voice for Peace, U.S. police trainings with the Israeli military are being exposed.  The Deadly Exchange campaign explains how these programs share, promote and extend discriminatory and repressive policing in both countries. U.S. police learn from the Israeli military and the Israeli military learns from U.S. police departments the tactics of urban warfare, racial profiling, extrajudicial executions, human rights defenders, shoot-to-kill policies, and massive networks for spying and surveillance. From Palestine to the U.S., Elbit is providing these tools to spy, surveil, and target. Tell Gov. Walz that ending racist violent policing means ending his state’s relationship with the Israeli weapons giant. Tell him to divest Minnesota from Elbit.

In solidarity with all peaceful protesters from Minneapolis to Palestine,