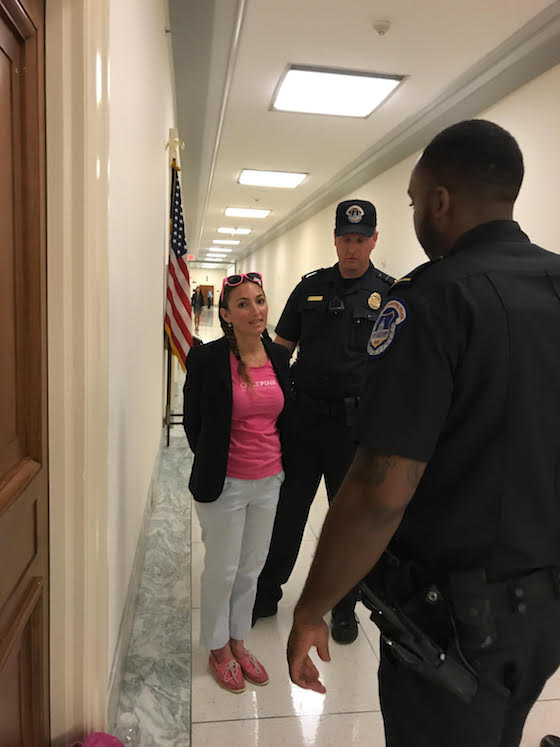 Washington, D.C. - On Thursday April 27, 2017 Congressmen Ron DeSantis and Bill Johnson launched the Israel Victory Caucus to encourage the US to take an even more extreme and militaristic anti-Palestinian approach to the Israeli-Palestinian conflict.

CODEPINK Middle East Campaign Director, Ariel Gold, registered ahead of time to attend the meeting. As she tried to take a seat in the room she was told she had to leave on account of belonging to CODEPINK, an organization that supports Palestinian rights. While preparing to leave Gold took out a ‘Free Palestine’ banner and started to speak about how Israel is in repeated and well documented violation of international human rights law. A man attending the meeting tried to rip the banner from Gold and yelled that she supports terrorism, repeating the oft heard implication that all Palestinians are terrorists.

President of the Middle East Forum, Daniel Pipes, who is well known for his Islamophobic pronouncements, spoke at the meeting. Pipes has previously stated that Israel should “return to the proven concept of victory,” an indication by Pipes that the American Congress, in its representation of the American people, should back not just the continued use of military violence by Israel against the Palestinian people, but escalate that violence, rather than pursue negotiations or adhere to international law.

Josh Rubener of the US Campaign for Palestinian Rights spoke about the formation of this caucus:  "Today's launch of the Congressional Israel Victory Caucus--the brainchild of notorious Islamophobe Daniel Pipes and his Middle East Forum--is deeply disturbing. Its chairs--Rep. Ron DeSantis and Rep. Bill Johnson--have committed themselves to advocating for Palestinians' defeat and their acquiescence to Israel's permanent subjugation. The truly bigoted nature of this caucus is apparent in the Middle East Forum's insistence that Israel's defeat of the Palestinians is in their best interests and will enable them to become a 'normal people.' One would have thought that this type of colonialist rhetoric would have disappeared in the first half of the 20th century, but sadly it is alive and well with this new caucus."

Gold was escorted from the room by congressional police and charged with unlawful entry even though she had legally registered for the meeting and had shown her identification at the door. Gold stated “This year marks 50 years that Israel has been militarily occupying Palestinian land in the West Bank, East Jerusalem and Gaza. Rather than launching an Israeli victory caucus, Congress should stop supporting the clear and consistent Israeli violations of international law and the gross and criminal abuse of human rights against the Palestinian people that are recognized by the rest of the world.”