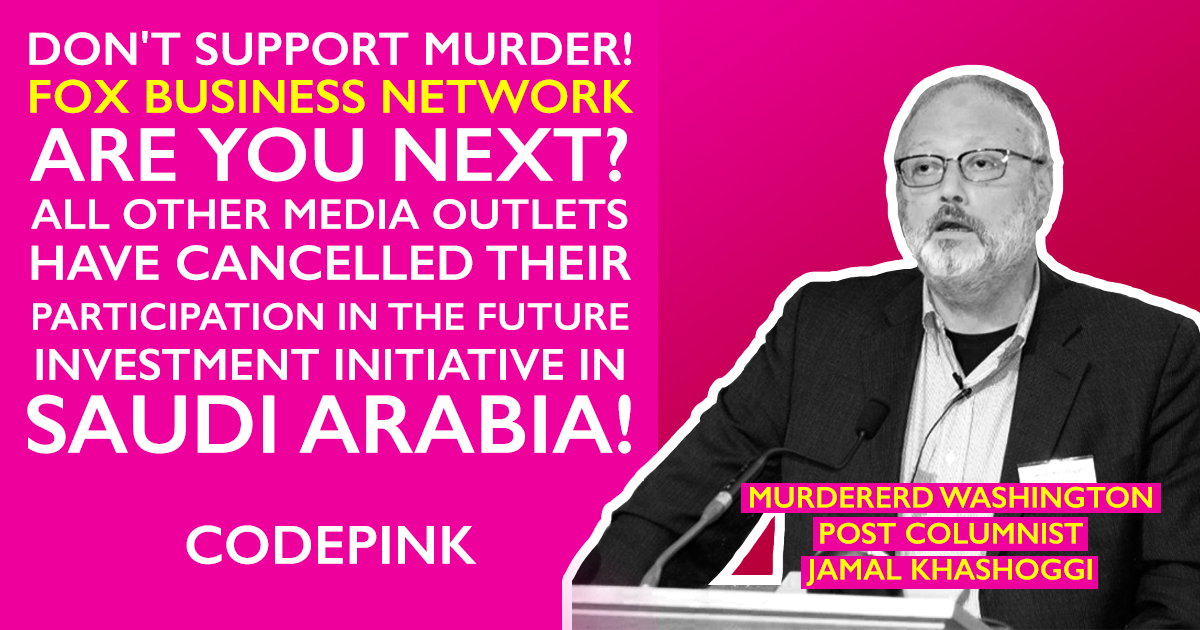 Following the murder of Washington Post columnist Jamal Khashoggi, companies are embarrassed to be associated with Saudi Arabia. Media companies and business leaders, scheduled to participate in the Saudi Future Investment Initiative conference next week in Riyadh (dubbed Davos in the Desert), are suddenly dropping out. First The New York Times said that due to Khashoggi’s disappearance, it would be cancelling. Moments later, The LA Times, Economist, Financial Times, CNBC and Bloomberg followed suit. Uber Chief Executive Dara Khosrowshahi announced he would not be attending and even the Harbour Group, who had been receiving $80,000 per month to lobby for the Saudis in Washington, announced they were ending their contract.

The only media outlet that is still planning to attend the Future Investment Initiative (FII) is Fox Business Network. Tell Fox to join the boycott of a regime so repressive that it carried out a cold-blooded, premeditated murder of a Washington Post columnist.

Repression and death are nothing new for the Saudi Kingdom. Saudi bombings in Yemen have created the largest humanitarian crisis of modern times. In April 2018, Human Rights Watch reported Saudi Arabia had beheaded 48 people over a 4-month period. And Saudi prisons are filled with bloggers, human rights activists, women’s advocates, religious minorities, and lawyers who support them.

So many business leaders have cancelled their participation in the Saudi conference that FII has removed the list of speakers from its webpage. While BlackRock CEO Larry Fink and US Treasury Secretary Steve Mnuchin are still planning to attend, World Bank President Jim Yong Kim, Virgin Group founder Richard Branson, AOL co-founder Steve Chase and so many others are not.

Fox News has said it is considering whether or not to participate in the conference, giving Khashoggi’s murder. Add your name to our petition telling Fox not to support murder and war. Tell Fox to cancel its participation in the Future Investment Initiative.

People often say that appealing to Fox is a complete waste of time. But over the past few weeks, on four occasions, Ariel and Medea have been guests on Fox News shows, reaching millions of people. With so many others pulling out of the conference, we think it's possible to get Fox Business Network to join the pack. Add your name to our petition now.

P.S. Sign up now to join our one-day Peace with Iran summit December 1, in Washington, D.C.